The best Alabama ghost story is usually a true one. True stories are often much scarier than those Alabama urban legends that are made up, and the state has its share of stories that have frightened its residents for decades.

The Carrollton courthouse burned down twice; the first fire occurred during the Civil War, and the second in 1867. Since the town had just rebuilt prior to the second arson, the local residents were understandably upset and were looking for someone to blame. The blame promptly fell on a local troublemaker, Henry Wells, and he was charged with arson, burglary, assault with intent to murder and carrying a concealed weapon.

After he was convicted of these crimes, a mob formed outside of the courthouse demanding that Mr. Wells be handed over to them. At the same time, a storm was brewing outside. While Mr. Wells was looking out of one of the upstairs windows at his would-be attackers, lightning struck, killing him at the window where he stood. This story might have faded into the annals of history if it weren't for the bizarre image of Mr. Wells that was etched into the window on that evening. The image of his face can still be seen in the glass today, just as clearly as it was over 100 years ago. No amount of cleaning can erase this incredible image.

There is an old mansion in Huntsville that is reportedly haunted by the ghost of 15-year old Sally Carter. Stephen Ewing built the mansion in 1823. Sally was visiting her sister, Mary Ewing when she was struck down with a fatal illness. She died several weeks shy of her 16th birthday, on November 28, 1837.

Sightings of Sally's ghost started in 1919 when a teenage boy who was staying at the mansion had a dream about her. In the dream, Sally came to him and told him to fix her tombstone, which had been toppled over during the previous night's storm. Sure enough, when he went to visit her tombstone the next morning, it had been knocked down. Over the years many witnesses report seeing Sally's ghost, both in the house and near her grave. Due to numerous cases of vandalism of the grave site, while it was located on the premises of the mansion, the bodies were exhumed and moved to an undisclosed location.

The Drish mansion, in Tuscaloosa, has as much reason to be haunted as any home in the Old South. Several tragedies befell the Drish family including suicide, murder, and insanity, all within two generations. The first tragedy within the family was that of daughter Katherine. Katherine was forced to marry a man her father chose for her instead of the man she truly loved and became deeply depressed after the wedding. Her husband, unable to handle his wife in this condition, returned her and their two young boys to the mansion. He divorced her soon thereafter. Katherine could never function properly afterward and had to be locked in her room at night and followed about during the day to ensure that she didn't hurt herself. 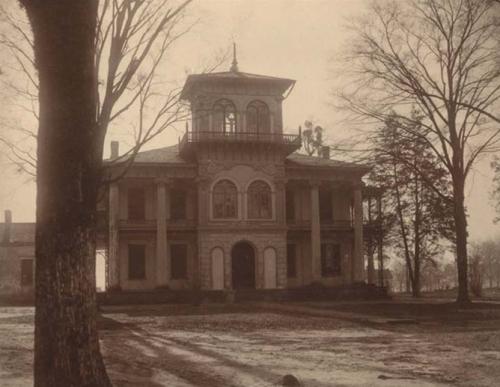 The next tragedy was that of Dr. Drish. He had a penchant for drinking and gambling and soon drove his family to the brink of ruin. One evening, as he was suffering from delirium, he ran from his bed and headed towards the staircase. He fell halfway down the stairs and died. One of the most interesting stories about the old mansion, however, is that of the ghost fires.

A custom, at the time, was to place candles about the room where a body was laid to rest. Dr. Drish's wife Sarah conducted this ceremony for him and put the candles in a drawer with the hope that they would be lit for her as well when she died. Her ceremony was forgotten. One evening after her death, the slaves on the grounds noticed that the tower was on fire and called for the fire crew. When the crew arrived the flames had disappeared, along with any sign of having burned. Once the fires disappeared, so did the ghost of Mrs. Drish.

Yet another tragedy that befell the family was that of a beloved niece, Helen Whiting. Her husband was jealous of her beauty and popularity. One morning, he attacked her in the bathroom and slit her throat. He spent several years in a mental institution before he was released. After his release, he became a wealthy railroad tycoon. The workers in the Drish mansion refused to touch any of the things that Helen had left behind, believing that they were haunted. 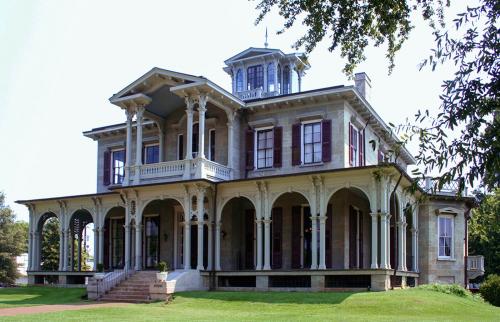 It is believed that Mr. Van de Graaff's daughter, Priscilla Cherokee and her husband, Andrew Coleman Hargrove, haunt the house. Mr. Hargrove suffered for years from an incurable headache caused by a bullet wound to the head. Eventually, he could no longer take the pain and shot himself in the home's library. Priscilla was distraught over her husband's suicide and fell into a deep depression and wild hysteria. After eight years of such suffering, she died.

Maple Hill Cemetery in Huntsville is the largest and oldest in the state. It was founded in 1822 and covers 100 acres. Near the cemetery, there's a playground where children's spirits are rumored to go to play. The spirits aren't just those from the cemetery, though. In the 1960s there was a series of child abductions and the bodies were left around the playground. Visitors have reported seeing swings move with no explanation, orbs, and mysterious figures. When the Alabama Paranormal Society did their investigation in 2008, they heard a female voice. In the pictures they took, a woman's figure is apparent among the orbs.

If you're interested in reading more stories about the haunted state of Alabama, visit these paranormal websites:

Urban legends that tell of ghosts are prominent in Alabama urban stories. A few of these urban tales claim to be true.

In Abbeville, one of the widest known urban legends is Huggin' Molly. Some believe the story was created to discourage children from playing outside after dark. Huggin' Molly is a monstrous seven-foot-tall ghost dressed in all black, including a classic wide-brimmed witch's hat. She is said to wander Abbeville throughout the night in search of children. If she spies you, she'll descend on you, grab you in a crushing bear hug while screaming in your ear at the top of her lungs. This urban legend is so popular there's a restaurant named after this haunting creature. The Huggin' Molly's® Restaurant is located downtown Abbeville.

In Gadsden, the Hinds Road is said to be haunted by the ghost of a woman who appears from the woods. The tale describes a witch who lived in the woods that surround the road. If you're brave enough to walk along the road at night, the ghost witch will rush up to you screaming she sold her soul to the devil.

In Huntsville, the urban legend of the Dead Children's Playground (Drost Park) is said to be haunted by children's spirits. It's a macabre setting since this small playground complete with slides and swings is located inside the Maple Hill Cemetery. It's no wonder this playground is surrounded by urban myth and legend. Its location alone is enough for ghost stories, but when several children from the area were abducted in the 1960s and some of their bodies discovered near the park, those stories grew. The cemetery lives up to its name with reports of swings swaying on their own, strange lights, orbs and apparitions of children playing.

There's no shortage of haunted locations in Alabama. Most of the ghost stories come with a rich backstory so you know exactly who's there and what to expect if you visit. From family tragedies to those who just want to be respected after their deaths, Alabama ghost stories can fuel your paranormal curiosity.