Throughout history, ESP experiments have fascinated both research scientists and mainstream society. An experiment can offer valuable insights into how ESP may work. With the hope of better understanding psychic abilities, scientists have performed ESP research and experiments at various higher learning and military institutions, and their results are fascinating.

Serious scientific study of the ESP phenomenon and the first ESP experiment began in the 1930s. American parapsychologist Joseph Banks Rhine was one of the first researchers to experiment with the ESP phenomenon in the lab. Rhine had subjects attempt to predict the order of a series of five symbols when pulled from a randomly shuffled deck of 25 ESP cards called Zener cards. Rhine classified subjects as having ESP based on a calculation of the odds of their successful guesses against the odds of chance alone. 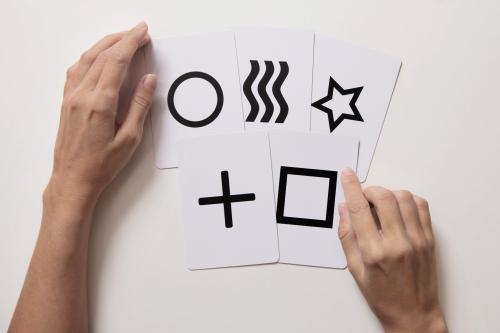 Rhine found many high-scoring subjects using the Zener cards. However, many have criticized Rhine's methods, citing poor controls that allowed for the possibility of sensory leakage, such as the test subject being able to see a reflection of the cards in the tester's glasses, poor shuffling methods, and others.

Starting in the mid-1960s, Canadian Sheila Ostrander and American Lynn Schroeder, two researchers and writers, spent years studying the work of Soviet scientists within this field. Under the more open-door atmosphere created by the new Troika rulership, Schroder and Ostrander spent three years collecting information about Soviet parapsychology research. In 1971, they published Psychic Discoveries Behind the Iron Curtain. This book became an instant hit within New Age circles. However, it also caught the eye of the U.S. government.

A Defense Intelligence Agency (DIA) document dated July 1972 (declassified in the mid 1990s) reveals the extent to which the revelations in Ostrander/Schroeder book concerned U.S. intelligence. The memo reads:

"According to Ostrander and Schroeder, the USSR is ahead of the US in certain areas of technical psi research."

The report indicated that DIA concern focused on the possibility that Soviet success with ESP may allow the Soviets to:

At exactly the same time the U.S. Intelligence community became concerned about developments in the Soviet Union, a lecturer in the electrical engineering department of Stanford University by the name of Harold (Hal) Puthoff decided to enter the field of PSI research.

Formerly an NSA (National Security Agency) officer, Hal was an accomplished physicist in the field of laser research. He obtained a patent on a tunable Raman (infrared) laser and was co-author of a textbook entitled Fundamentals of Quantum Electronics. It is uncertain what caused Hal's sudden departure from mainstream physics to the controversial world of psychic research in 1971.

In 1971, Hal Puthoff reached level OTVII within Scientology. Additionally, according to Jeffrey Richelson in his book The Wizards of Langley, Puthoff's funding for his SRI (Stanford Research Institute) laser-related research dwindled, so he obtained permission from his boss, and then obtained a $10,000 investment from the owner of the Church's Chicken franchise to begin conducting ESP experiments to determine the existence of psychic abilities.

The Birth of Remote Viewing

Only a year later, Puthoff was the head of SRI's government contract, through the Central Intelligence Agency (CIA), to research and determine if what the Soviets intended to use the phenomenon for was possible. From 1970 through 1985, Puthoff and SRI were the central focus of government investments into researching the phenomenon. The initial research began at the CIA office of Science and Technology, and then transferred to the Department of Defense (DoD) and eventually the DIA. The Air Force and Navy both invested significant resources into researching the phenomenon and enlisted SRI's assistance. SRI's work in this field resulted in an entirely new term for the phenomenon of clairvoyance that Ingo Swann called "Remote Viewing." Hal Puthoff is considered the father of remote viewing by those who claim to practice it today.

In 1995, the CIA conducted a final evaluation of the 24 year government-sponsored ESP experiments and programs. The AIR released its assessment to the public on November 28, 1995. The three researchers commissioned to write the report asked two professionals to provide individual evaluations of the program.

The two evaluations were very conflicting. Jessica Utts, in her evaluation, stated that the statistical effects reported in the SAIC experiments indicated that psychic functioning is well established. Ray Hyman agreed that effect sizes were larger than chance, but disagreed whether those non-chance effects justified concluding that the reality of psychic functioning can be established.

Research into various forms of psi ability remains an ongoing field of study. Outside of government organizations, agencies such as the Society for Psychical Research in the UK, the Rhine Research Center (formerly the Duke Parapsychology Lab), and the Laboratory for Advances in Consciousness and Health at the University of Arizona conduct controlled social scientific studies to help better understand ESP and other psychic phenomena. Along with studying psi, these organizations also test things such as various forms of energy healing, communication with spirits, poltergeist phenomena, and telekinetic abilities.

Extrasensory perception (ESP) is often called a "sixth sense." While humans have the five standard senses of sight, sound, smell, taste and touch, there is a theory that humans also have another sense involving the mind. The term "ESP" was initially used by a French researcher named Dr. Paul Joire in 1892 when he used the term to describe how people who were hypnotized could still sense things around them without using the five senses.

Even With Research, ESP Remains a Mystery

Surprisingly, after ESP experiments stretching from the 1930s all the way through the 24 years of U.S. Government sponsored parapsychology research and into the modern era, there is still no definitive answer. No scientist can point to any set of parameters that will generate a repeatable effect to prove the reality of the ESP phenomenon.