Kid-friendly ghost stories can be fun for children under 10 who enjoy getting creeped out, but don't suffer any long-lasting fears about what they've read. Here are a few scary kids' ghost stories worth reading.

The Ghost of the Indian Brave

"I'm warning you boys, stay out of the ravine. There is no Indian brave buried down there. That's just an old myth kids have been passing on to each other since I was a kid. The only thing you're going to find down there is trouble!"

Jimmy and Joey's father flipped off their bedroom light and closed the door thinking the matter was settled, but at least one of the boys had other ideas. Jimmy had long been fascinated with the story of how local settlers had fought to drive the Indians out of the area and make it safe for building cabins and farming. As the story went, one brave's body was left behind after a particularly violent skirmish, and the settlers buried it in an unmarked grave somewhere in the ravine. Unhappy about being separated from his people for all eternity, the ghost of the brave was said to haunt the area.

Jimmy's head was swimming with thoughts of the story as he dragged his backpack from under the bed. Joey's eyes grew wide with astonishment as he began to understand what his brother had in mind.

"You can't go out there, Jimmy. It's too dark, and Dad will have a cow if he finds out you're gone. What am I supposed to tell him?" Jimmy stared at his younger brother for a second and then said, "You can tell him whatever you like if you're going to snitch on me. Or... you can come with me."

Down Into the Ravine

Jimmy carefully opened the bedroom window and set his backpack on the porch roof. He lifted one leg over the sill and paused to look back at his brother. Joey knew he really didn't have a choice in the matter. He'd been following his older brother all his life, and tonight would be no different. 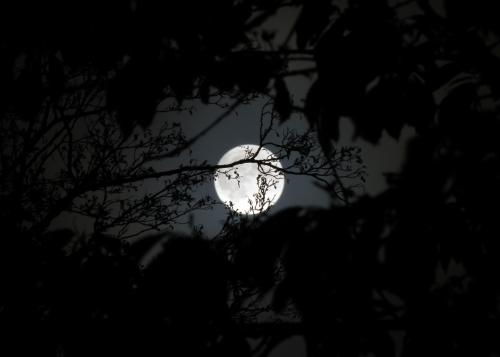 Both boys quietly climbed onto the porch roof and made their way down the side trellis one at a time. Their escape accomplished, they ran silently toward the ravine behind their house. The light of the full moon shined brightly when it wasn't obscured by the passing clouds, but Jimmy brought a flashlight along just in case he needed it.

They made their way down the side of the ravine without saying a word, each entertaining his own thoughts and fears yet exhilarated by the adventure ahead.

Jimmy shined his flashlight around and looked for the most likely place to bury a body. He thought it might be in a higher spot that wouldn't be likely to flood if the nearby stream overflowed after a rain. He finally settled on an area next to a huge oak tree and handed the flashlight for Joey to shine on the spot. Without a word between them, Jimmy pulled his Dad's garden trowel out of the backpack pack and began clawing at the ground to loosen it. Just then a cloud drifted over the moon, and everything went dark.

An owl suddenly screeched, and a startled Joey dropped the flashlight. The light rolled down to the stream and fell in the water. "Thanks a lot, scaredy-cat, said Jimmy. Now I can't see a thing."

Joey began to feel an odd tingling up his spine, and then an unearthly shriek pierced the air. At that precise moment, the moon came out from behind the cloud, and Jimmy could see the shadowy outline of a man with a single eagle feather rising from the back of his head. That figure was standing just behind little Joey.

Jimmy screamed, "RUN!" Grabbing Joey by the hand, he pulled his brother down the other side of the slope and headed toward the edge of the ravine they had entered by. The boys climbed back up it as fast as they could and continued running for their lives back to their house. They quickly shinnied up the trellis, dived into their bedroom window, and slammed it closed.

Panting for breath, they sat on the floor waiting for their hearts to stop racing. When they calmed down, they made a pact that they would never speak of what happened in the ravine, and they would never go down there again.

The Rapping in the Attic

One day, Judy and Henry were playing baseball in the deserted street just outside of Henry's house. These lived next door to one another and played together often; their dead end street made an ideal playground. Just across the road from Henry's house was an old abandoned home. The house had a menacing feel, with half of the windows cracked and broken from both age and vandalism. The front porch was broken and slanted, and the door itself hung loosely from its hinges, partially opened to reveal a tiny slice of the unimaginable darkness inside. Although it was an eyesore and a menacing building to look at, both Judy and Henry had grown accustomed to it. They'd learned to avoid it, both because their parents warned them to, and because going inside the building was an idea that neither of them were willing to entertain. 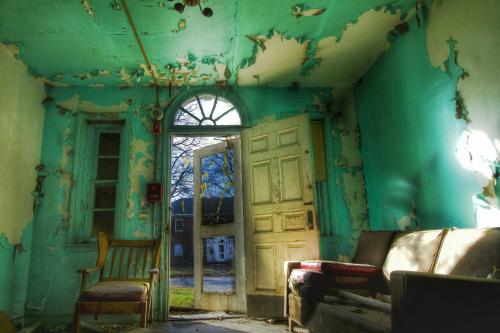 One particular evening, just as dusk was approaching, Judy and Henry stood on opposite sides of the road. They were having a baseball throwing competition tossing the baseball as high in the air as possible, and the other person had to catch it. If they couldn't catch the ball before it hit the street, the thrower scored a point.

Judy was a better catcher than Henry, so she'd easily racked up seven points to his four. Frustrated and determined to make her miss the next throw, Henry wound up his arm and started to launch the ball. In the middle of his throw, he stepped forward and his foot caught a rock on the pavement. He stumbled as he launched the baseball far up into the twilight sky, but instead of shooting straight up, it sailed horizontally across the road, over the weed-strewn front yard, and directly through the glass of a second story window in the old abandoned home.

Judy turned around and faced Henry with a look of horror. "Oh no, what are we gonna do?" She covered her mouth with her glove, and her eyes were wide with panic. Henry stood with his hands hanging by his sides as he stared up at the gaping hole in the second story window. He opened his mouth in disbelief.

"Henry! What do we do now?" Judy put her hands on her hips, frustrated by his lack of response. Finally, he dropped his gaze from the window to settle on Judy's face.

"I don't know. That's the ball my dad gave me when I was little. It's my favorite baseball," Henry responded with tears welling in his eyes. He struggled to maintain his composure, but the thought of losing one of his most prized possessions was almost more than he could bear.

"I guess...I mean, I think we better get it then," Judy said, trying to sound as brave as possible even though the thought of entering the house, something she'd dreaded her entire childhood, brought goose bumps up and down her arms.

"Yeah...I...I guess so," Henry agreed. Neither of them would admit to the other how terrified they were over the idea of entering the darkness beyond that front door.

The moment Judy pushed the front door open and stepped beyond the threshold, a pungent aroma of some kind of dead rodent and the stench of animal feces struck them like a hot wind. "Awe God...it's horrible!" Judy cried.

"Yuck...it smells like something totally died." Henry squinted in the darkness. A hallway led straight from the front door to another open doorway that led to the kitchen. Another dark doorway to their right led to an empty room with shuttered windows where shadows danced in every corner. Both children looked up the dusty staircase. Judy immediately started for the staircase, but the moment her foot touched the first step, they heard a sound above them...rap, rap, rap.

"What was that?" Judy asked.

"I don't know, but it's coming from upstairs. Let's just get the ball and get out," Henry replied.

As they raced up the stairs and reached the second floor landing, they heard it again, only this time it was louder. RAP, RAP, RAP.

Henry spotted his ball at the base of the hallway window.

The Rapping, the Trunk, and the Horror

Being children, and terribly curious now, they saw the narrow staircase leading to the attic and decided to find out what the rapping noise was. Cautiously, they crept up the staircase, opened the door and entered the dark attic. Lit only by a large window at one end, the attic was completely empty except for a single trunk in the middle of the attic floor.

The sound was clearly coming from inside the trunk as both children approached it carefully. It was made of dark, aged wood, and it wasn't locked. Whatever was inside could easily escape if it wanted to.

Henry and Judy looked at each other with horror, but curiosity would not allow them to leave. They each grasped one corner of the trunk lid, and bracing themselves, slowly opened the old trunk lid to reveal...

These endings of these stories show just how different ghostly tales can be. One has a more traditional spooky ending while the other has a humorous ending that makes it especially good to tell around a campfire. As with all ghost stories, make sure the tale is age-appropriate before your child reads it unless you want to be woken up in the middle of the night by a little one asking to climb into your bed.