The history of guardian angels is ancient with endless stories of their mission and acts of love. These angelic human protectors are responsible for the safety of individuals and often entire cultures or countries.

The mission of guardian angels in the world's culture is nicely summed up in a single line. The explanation comes from the Holy Bible found in Psalm 91 and states, "For he shall give his angels charge over thee, to keep thee in all thy ways."

From Life to Death

Not only is there a belief that each person has an assigned guardian angel to guide and protect them through life, but that same angelic entity also guides the person into afterlife. Depending on the culture and religion, the guardian angel may have other duties as well.

Historically, different religious sects have sacred texts referencing angels and their purpose. From demi-gods to benevolent spirits, these supernatural beings are prominent figures.

In Classical Greece, the concept of a guardian angel was called a demon or daimon. Greek religion explained it as a supernatural power. Homer used the word god (theos) to show the god's personality while demon (daimon) was the name given to describe the god's activity of interventions in a person's life.

During the classical period (753BC - 509 BC) of Rome the belief that each person had a Genius was commonly accepted. The genius was a sprit that attended to the person throughout their life. There was also the belief that a genius could be assigned to oversee a place. This concept evolved over time and morphed into a guardian angel often referred to as a higher self.

While the Catholic Church recognizes that only three Archangels are mentioned in the Holy Bible, Michael, Gabriel and Raphael, the Church also points to the Book of Tobit (Catholic Church and Eastern Orthodox Church). In Tobit 12:15, Archangel Raphael verifies seven archangels exists by stating, "I am Raphael, one of the seven angels who stand in the glorious presence of the Lord, ready to serve him." 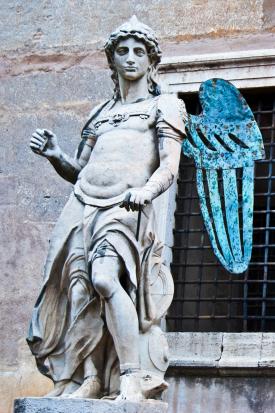 Angels Recognized by Other Cultures and Religions

Besides the Christian faith, Judaism recognizes Archangels Michael and Gabriel. Judaism recognizes Michael as Israel's tutelary protector. Islam recognizes the three archangels along with others. In certain Buddhist practices, there is the belief in Dharma Protectors that are spirits who protect and guide the individual. The guardian spirit in Native American culture serves as a protector and instructor.

There are countless stories of guardian angels stepping in to save a person or to offer comfort during emotional upsets. These stories are compelling and inspiring. 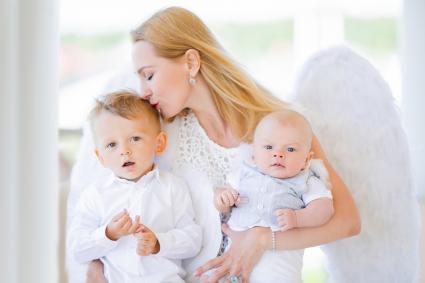 Guideposts features a story told by a man who was with his family gathered around his mother's deathbed. He describes seeing intense bright light fill the room. He is shocked to see two very tall male figures step out of the light. As his mother draws her last breath, the two angels support his father. The man describes his father being held up by wings of light.

Angel Reach tells how a young girl was run over by a delivery truck with both the front and back wheels. At the hospital, the staff was shocked to find the only mark on the girl was a tiny bruise on her shoulders. The child described how a man in a white robe had lifted the truck, so the wheels didn't run over her. Needless to say, the medical staff couldn't explain how the child came so close to death but was unscathed other than intervention by an angelic being.

Guardian Angels Save Woman From Mugging

Works By Faith Ministries showcases a story about a woman named Stacey who walked home in the dark. Along the way, she saw a dark figure loitering by a building. Frightened, she called upon her guardian angel to protect her. She hurried past the man and into the safety of her apartment. A few minutes later several sirens sounded, and she saw the lights of police cruisers near the building she'd passed. The next morning, she learned a young woman was attacked soon after she'd passed the man. Contacting the police Stacey was able to identify the man. Curious why he didn't attack her when he had a perfect opportunity, the police inquired. The man explained he'd seen her with two big guys and dared not attack her.

Charisma Magazine highlights the story of a young preacher, Dr. Ron Phillips, caught in a winter storm in northern Alabama. After nearly sliding off the side of the mountain, he cried out for God's help. The response took him by surprise when he was instructed his guardian angel was already there to help him stay on the road. He saw a glowing figure in the passenger seat. At the base of the mountain, Dr Phillips discovered the road was closed. As he talked briefly with the state trooper, he looked over at the passenger seat and glimpsed a man sitting there as did the officer.

The following story is from the author, Sally Painter.

"When I was six, I was riding a new bicycle around the driveway loop when I saw what I thought was a yellow streaked, black charred piece of paper. I leaned down to touch it."

"Don't touch that!" A loud male voice boomed behind me.

"I jerked around, but no one was there. By that age, strange phenomena were as common as breathing, so I ignored it and reached toward the paper again."

"I said, don't touch that! Go and get your grandfather. Now!"

"I returned with my grandfather in tow and pointed down at the paper. He peered down at it then very quickly nudged me behind him."

Lifting a large rock from the flower bed border, he slowly dropped the heavy boulder on the paper. A whoosh sound and dust rose around the rock.

"Do you know what that was?" he asked.

"I just shrugged, having learned a long time ago that no one believed or understood the strange things I saw or heard. There was no way I was going to say, this invisible man told me to. No way!"

"That was a rabid bat. Had you touched it; it would have bitten you many times before anyone could have reached you. You would have probably died." He then described the multiple shot treatment for rabies and how several bites might have been too much for even the shots to save me.

"I think about that voice almost every night before I drift off to sleep. My guardian angel saved my life, and it wasn't the only time."

When you hear story after story of real-life encounters with guardian angels protecting their charges, what you may have believed to be mythology suddenly becomes reality. If you've ever had the intervention of your guardian angel, you know firsthand what a blessing these beings are.