Broughton State Hospital in Morganton, North Carolina, is said to be haunted. However, there has never been any paranormal investigation conducted since it is still operating as the state's psychiatric hospital. Ghosts are seen on a regular basis by hospital staff and patients.

History of Abuse and Neglect

At one point in the 1920s, the understaffed hospital was overwhelmed with patients. There was only one doctor for every 355 patients. This spawned patient neglect and abuse. Patients died under these circumstances and soon stories about the hospital being haunted began to surface. According to WSOCTV, experiments that went wrong and patient suicides are also part of the hospital's dark past.

According to eyewitnesses, paranormal activity is a common occurrence at the hospital, especially during the graveyard shift (3rd shift). Just ask Margaret Langley, a registered nurse, about her job, and you'll quickly learn that ghosts haunt the hospital where she's worked for two decades. Her ghostly encounters prompted her to write a book, Haunted Broughton, Tales From the Graveyard Shift, that includes real life ghost stories others tell about the hospital. "I felt that these events should be documented," Margaret said.

Some of the things witnessed by workers and patients include:

Areas With the Most Paranormal Activity

Employees working late at night witness strange anomalies, especially in the least used areas or places no longer used, such as high control areas for violent, uncontrollable patients and the wards where the criminally insane were once housed. These places are known for intense paranormal activity. Margaret stated, "BH is a totally different place at night. You see shadows out of the corner of your eye and hear things that can't be explained."

Margaret and a co-worker witnessed a vaporous cloud floating down the hall about five feet off the floor. "As we stood there in amazement, the cloud sort of melted away," she said. The two co-workers quickly investigated and could only come to one conclusion: it was a ghost or spirit.

A network of tunnels run underneath the hospital connecting the series of buildings. Used to transport patients to different buildings, it's rumored that wealthy families used the tunnels to admit family members and later to visit undetected by the public. The Steward and the Matron of the asylum would check on the wards and the patients by carrying a lantern and walking through the tunnels. There were also tracks in the tunnels leading from the kitchen and laundry room in order to transport supplies back and forth throughout the hospital.

Along with the stories of hauntings at the hospital are tales of severe brutality with patients being chained to the walls of the underground tunnels. However, Margaret believes this is just one of those stories told to embellish the ghost factor. She explained, "I have talked to people who have actually been down there, and they report no sign of chains exist today." However, employees have reported hearing the rattling of chains, moans and wailing.

Patients have reported seeing ghosts, and many have been terrorized by what they've seen. Margaret described how two male patients told her about seeing a blue light floating just outside the windows. "When they got up to see what it was, the light floated over the trees and through the leaves. It moved around and around until it disappeared. They were very adamant about what they saw," she said.

A nurse working the night shift on Ward 8 finished up her paperwork and started down the hall to join another staff member sitting in the area. She began talking with her co-worker when she noticed a shadow appeared to be sitting on the sofa at the end of the hall. Her co-worker noticed her attention drawn to the area. He explained the ghost was a man playing solitaire. When she turned to look directly at the shadow man, she was able to tell his movements were those of someone playing cards. Eventually, the shadow vanished into the air. The co-worker explained how he saw the same ghost regularly during twilight hours and had become used to it.

People have reported hearing their names called by disembodied voices. Margaret heard a female call her name in a loud whisper one night when she was working alone in Bates Building. She also experienced a strange odd sensation. "I never had a fear of being there alone prior to that night. It scared me so bad that it felt like an iron prod was shoved up my spine into the base of my skull," she said. 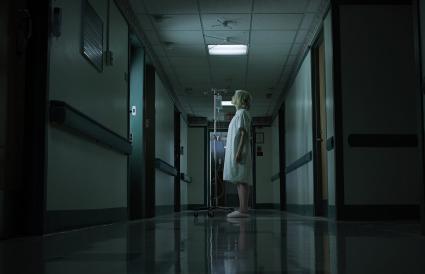 Whether these incidences are the result of residual or ghost activity is undetermined. There are many similar stories told by those who have worked or been a patient at Broughton State Hospital.