Navajo witchcraft, a kind of spirituality practiced throughout the great Navajo Nation, is a phenomenon that is greatly feared and rarely mentioned, especially to outsiders. Read on to learn more about their major types of Native American mysticism and the legend of the Skinwalker.

What Is Navajo Witchcraft?

This Navajo form of witchcraft is not separate from Navajo spirituality, it is simply another set of "Ways" within the Navajo religion. Like other Native American belief systems, it is a form of mysticism. The Navajo believe that people must live in harmony with Mother Earth, and that there are two classes of beings, Earth People who are mortals, and the Holy People who are unseen spiritual beings. They believe these beings have the ability to either help or harm mortals. The Navajo believe illness and life problems are "disorder" within one's life that can be remedied with herbs, prayer, songs, medicine men, and ceremonies. However, while medicine men learn the Navajo Ways to heal and aid those who are afflicted, there are others who practice Navajo witchcraft and seek to direct spiritual forces to cause harm or misfortune to others.

The term witchcraft doesn't accurately apply because this form of Navajo spirituality has little to do with the practices and beliefs of European witchcraft. In fact, Navajo "witchcraft," in the sense that the Navajo believe, is simply another aspect or set of "ways" within the existing Navajo spiritual culture. The four basic "ways" of Navajo witchcraft are, "Witchery, Sorcery, Wizardry, and Frenzy." None of the four are actually witchcraft in the European sense of the word. They are simply additional parts of the vast spirituality of the Navajo people.

The Four Ways of Navajo Witchcraft

The Dine (Navajo) believe there are natural places where powers for both good and evil are concentrated, and that those sacred powers can be harnessed for good (healing) or evil (harm). Navajo witches also believe objects such as hair or personal items can be used for good or evil. Within Navajo spirituality, the supernatural and the physical worlds are tightly intertwined, so pieces of physical objects like bone, hair, or other items hold strong supernatural properties that can be manipulated. For the most part, only a thin line separates the living from the dead, the good from the evil, and the medicine man from the Navajo witch. 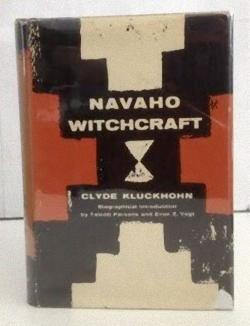 In his 1944 book Navajo Witchcraft, anthropologist Clyde Kluckhohn lists the four "Ways" of the Navajo witch as follows.

The Witchery Way is the best known form of Navajo witchcraft. Those who practice the Witchery Way, like all Navajo traditions, learn it from the elders of their family. Very little is actually known about those who practice the Witchery Way, as very few Navajo are actually willing to speak about it. Every form of this witchcraft is based on death, and the Witchery Way focuses on corpses. Although little is known about Navajo witches, witnesses have reported that they gather in caves or any secluded place where they go into animal form. During these gatherings, they perform ceremonies similar to other Navajo ceremonies that involve rituals, dance, and sand-painting. However, they perform these ceremonies with some dark alterations, such as using ash instead of sand, or modifying other Navajo rituals in "corrupted" ways. These gatherings are also rumored to include necrophilia and cannibalism.

Skinwalkers are the famous Navajo witches who follow the Witchery Way and transform into animal form in order to take advantage of the unique characteristics and special powers of those animals. The Skinwalker is the most famous Navajo witch throughout western culture, due to recent books and movies. The accuracy and truth of these stories can only be judged by the Navajo who live as neighbors to the real world Skinwalkers in Navajo Nation. Witness sightings of strange creatures, and odd phenomenon, are common throughout this part of the country.

Real Life Accounts of the Skinwalker

Some interesting witness accounts of real life skinwalkers are provided below:

While there are many articles, books, and even movies about this aspect of Navajo spirituality, most Native Americans living within the massive land called "Navajo Nation" would likely scoff at the western world's version of their religion. Within Navajo spirituality, both good and evil coexist, and both are considered natural parts of the world, made by the Creator. The Navajo have accepted the reality of both the good and bad phenomenon that exist in this world, and they incorporate that reality into their daily lives and their spiritual beliefs.