Paranormal pets seem to have an understanding of spirit with the ability to return after death, much like human spirits. Many pet owners have ghost stories of their paranormal pet visits.

Pet owners often describe how they hear, sense and in many cases see their pet's spirit. These are very real happenings to those who have a deep connection with their animal companions. None are frightened by these ghostly visitations. Instead, they find comfort knowing their beloved friends still exist in another form and dimension.

Dusty Rainbolt, host of the podcast Paranormal Pets on PetLifeRadio.com and author of several nonfiction and fiction books, agrees that pet spirits linger with their owners. She tells how one of her foster cats had to be put to sleep. "A month and a half after he died, I was lying awake in bed, and I felt the cat jump up in bed." She looked to see which of her cats was joining her for a cozy sleep. "There was enough moonlight flowing through the window that I could see there wasn't anything there," Dusty explains.

Dusty continued to share her experience and how she felt its little footprints as he walked across the bed. "I could feel the little feet and the pressure when he lay down." She explains this particular cat always slept on her ankles. "It was his little spot. And whatever this was walked across the bed, with its little kitty footprints, and then laid down on my ankles," she says.

When a pet dies, its spirit often lingers similar how human spirits often stay with family for some time after their passing. Dusty explains how her deceased cat returned to visit in spirit form. "I instinctively knew this was my little kitty, and I just wanted the experience. I felt perfectly safe, there was nothing frightening about it at all. It was a wonderful experience as a matter of fact," she says. For Dusty, it was a one-time thing, but for other pet owners, their cats often linger for weeks, even months after their passing.

There many public haunted places, haunted houses, historical places, and haunted hotels where ghost pets are residents. Much the same way human spirits are tied to a particular place, animal spirits seem to share this type of connection. 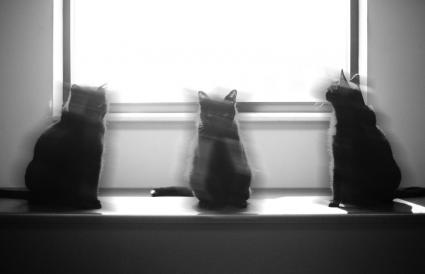 The Ivy House in Casper, Wyoming

According to Dusty, the Ivy House in Casper, Wyoming has a haunted litterbox! She states the previous owner was a crazy cat lady. Guests have claimed to see cats in the public areas, although there are no cats at the hotel. Along one of the hotel halls guests complain smelling a freshly used litterbox. The obnoxious smell eventually dissipates. Dusty says, "The owners say they haven't been able to find the ectoplasmic litter scoop."

Of the many ghost pet stories Dusty has to share, the one that gives her chills comes from North Texas. The local doctor was also an Evangelical hospice chaplain who traveled to California to care for her son's mother-in-law dying of ovarian cancer. The woman fell into a coma. A death bed visit with family temporarily revived her. She told how she'd been having tea with her long-dead sister while petting her daughter's cat. Her daughter reminded her that the family cat was alive. When the daughter and her family returned home that night, they were devastated to find their cat lying dead in the middle of the street.

Dusty discovered a deceased cat jumping on the owner's bed is a perhaps the most common form of interaction with animal ghosts.

Horses and Black Dogs Are Frightening

Unlike friendly cat spirits, black dog ghosts usually frighten witnesses. "Black dogs are kind of scary and associated with the demonic," she says. Dusty adds, "And horses can be scary too because they're such powerful animals in life."

Dusty explains that no one is afraid of a cat except for the one seen just before the assassination of President Lincoln. Supposedly, the demon cat appears before some tragedies, but not all of them. Aside from frightening a White House guard prior to Lincoln's assassination, the spooky cat showed up right before the 1929 stock market crash. Dusty is skeptical of the stories saying, "I don't think this is one of the legitimate stories because he didn't show up prior to Pearl Harbor or 9/11." Still, there were reports of the demon cat making an appearance right before President Kennedy was assassinated.

Understanding Your Interaction With Paranormal Pets

There are many ways to gain an understanding of paranormal pets, such as residual energy hauntings in addition to actual spirit interactions. It shouldn't be surprising that a loyal pet companion chooses to return after death much like a human does to reassure their loved ones.