One night after cooking supper on the grill, a father went through his usual ritual of cleaning off the grill's metal cooking grate. The only difference on this particular day was that he had just purchased a brand new wire brush. The wire brush performed exceptionally well. So well, in fact, that the father figured there was no need to wipe off the grill with a cloth afterwards. About a week later, the family held a weekend barbeque, and the father cooked several hamburgers on the grill. After the event two hamburgers remained.

Wire in the Esophagus

The next day the daughter was looking for something to have for lunch, so she took one of the burgers and reheated it in the microwave. She took a bite, then told her mother that it felt like a piece of burger was stuck in her throat. Her mother tried having her drink some water. When that didn't help she realized that something was wrong and took her daughter to the hospital. After checking her throat to make sure it was clear, the emergency staff took x-rays. The x-ray revealed a piece of wire stuck in her esophagus. The only way to remove the wire was through surgery. The girl was transferred to a Children's Hospital where the wire from the brush was surgically removed.

This took place in 2000, and the girl was treated at the Galveston Children's Hospital in Texas.

A fire began within a load of lumber being carried by a Swiss freighter. The crew managed to extinguish the fire, but they were forced to keep it under control by keeping the hot and smoldering wood as wet as possible. They kept this up for almost a month at sea until the wood caught fire again, and the ship was forced to land in Wales. The oddest part of the story wasn't the fire, but the cargo. What the crew failed to realize throughout the 25 days they were pouring water on the lumber was that the heat from the wood combined with the water seeping down into the lower cargo hold combined to create one of the world's first giant steam cookers.

The 1,500 tons of tapioca in the cargo hold began to cook and expand. By the time the freighter docked in Wales, not only was the timber ablaze again, but the ship was under threat of buckling from the pressure of the expanded tapioca if it reached its boiling point. It took two days for fire crews to clear the fire and lumber and save the ship from the potentially explosive tapioca.

This event actually happened in 1972 in Cardiff, Wales, when the Swiss freighter Cassarate was forced to dock due to a fire in the upper holds.

One day during a festival, a tug-of-war contest was held. There were thousands of contestants, and the stakes were high. As the day wore on the final tug-of-war contest took place and included all 1,600 contestants from all teams, half on each side of the rope. The largest man in each group stood at the very front of each team, facing each other. The contest began, and both teams of about 800 people started pulling as hard as they could. Unfortunately, what those present didn't realize was that the large nylon rope was rated for less than half of the total force they were exerting on it. Suddenly the center of the nylon rope snapped, and the thousands of kilos of force caused the rope to rebound and tear off the left arm of both of the two men at the front of each group. The men were raced to the hospital where their arms were carefully reattached. 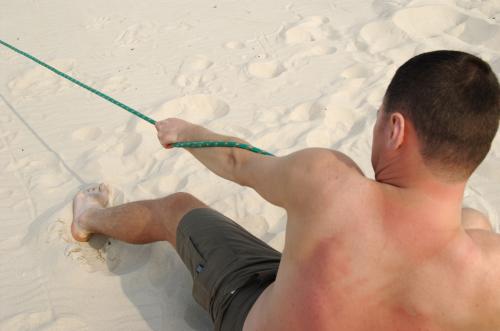 This event occurred on Retrocession Day in Taipei, held in 1997. The force of the rope snapping severely injured Yang Chiung-ming and Chen Ming-kuo. Their arms were reattached under surgery at Mackay Memorial Hospital.

A woman dying of cancer is brought into the emergency room of a hospital. When nurses attempt to get a blood sample, toxic fumes escape from the women's blood. Within minutes, each of the nurses that handled the blood sample and attempted to identify the strange odor coming from it began to complain of being lightheaded and to lose consciousness. Some found when they awoke that they had no control over the movement of their limbs. Twenty-three members of the emergency room staff were found to suffer at least one symptom from being in contact with the ill patient. Investigators have spent years trying to figure out the exact cause of the poisonous gasses emanating from the woman, with mixed results. A deadly combination of chemicals is said to have been accidentally created, the result of various medications and topical ointments used by the patient to treat various symptoms of cancer.

This took place on February 19th, 1994 when 31-year-old Gloria Ramirez was admitted to the General Hospital in the southern California city of Riverside.

Creepy Body in a Carpet Legend

Three students discovered a rolled and discarded carpet on the sidewalk while returning to their dorms one day. They decided to bring it home with them to help decorate their shared space. When they reached the dorm, they unrolled the carpet to discover a murder victim concealed inside.

Three Columbia University students did discover a dead body in a carpet in 1984.

Scary and True Tales of Terror

True urban legends can be found in most major newspapers in every country of the world. The fact that such strange and scary things happen to people so often is probably a very good reason why most people believe urban legends, even when they aren't true. As these stories are retold and spread from person to person, they often pick up different nuances and plot lines. Though the details may change along the way, the basis for all of these stories can be traced to facts.