Signs of paranormal activity often include unexplainable sightings as one of the strongest indicators that something otherworldly is happening. You may catch a movement just beyond your line of sight, or even see strange mists, unexplained smoke, and other visual cues.

Strange sightings are only the tip of the iceberg. There are many other examples of possible paranormal activity.

Seeing an apparition is considered the "holy grail" of paranormal evidence. Apparitions are the full or partial appearance of a human or animal figure that isn't actually one of the living people at the location. They usually disappear quickly. Apparitions break down into further categories including full-body apparitions, and partial apparitions. A partial apparition can be any part of the body, such as a torso, a face, or an arm.

Perhaps you've heard the sound of approaching footsteps when there's no one else around, or maybe you've heard strange music coming from a room where no one is playing it.

If you can't locate a reasonable source for the sound, it could be paranormal in origin.

A disembodied voice is a vocalization you hear at the time it occurs with no distinguishable source. For example, if you are alone in a room and a voice says, "Hello," but there is no one within auditory distance to speak those words, it is a disembodied voice. Disembodied voices may include whispers, spoken words, singing, sighs, shouts, or other vocalizations.

Electric voice phenomena (EVP) occurs when you capture a voice you didn't hear at the time on an audio recorder. The EVP is typically noticed during audio playback. According to parapsychological theory, EVPs result from a psychokinetic imprint on an audio recording device. Paranormal investigators hypothesize that these audio imprints are suggestive of paranormal activity. Interactive EVPs, such as a response to a direct question, are considered more likely signs of paranormal activities than random sounds.

Maybe a lamp suddenly switches on by itself, or perhaps a cupboard door swings open and then slams closed again. You might even detect a temporary scent that isn't related to anything in the room, like the scent of perfume or a cigar. These are just a few examples of odd occurrences reported in places believed to have paranormal activity.

During what is commonly referred to as poltergeist activity, inanimate objects may move on their own. Furniture may be rearranged, glasses may glide across a table seemingly under their own power. Sometimes, the activity appears downright mischievous when items become lost and then suddenly turn up in another unlikely place. Parapsychologists believe poltergeist activity is a manifestation of psychokinetic energy from both the living and the dead. Poltergeist activity is often linked to the presence of an adolescent.

A common occurrence that triggers suspicion of a haunting is object manipulation. A latched door may open or a faucet may turn on without any noticeable source of the activity. In other cases, investigators have used "trigger objects" to encourage manipulation. For example, at the Waverly Hills Sanitorium, investigators use small toys and balls with the hope that they will be able to capture an unseen child playing with them on film.

Investigators also use other objects they hope spirits will try to manipulate, such as pendulums, dowsing rods, and communication devices that light up if a spirit "touches" them in a certain spot.

Many paranormal investigators anecdotally report equipment malfunction in paranormal locations. For example, cameras or lights may shut off or stop working for no reason. Investigators hypothesize this occurs because spirits can manipulate the equipment in an attempt to communicate, or because they require energy to manifest and therefore they pull energy from the investigators' devices.

Paranormal investigators often report that the batteries on their electronic devices such as flashlights, cameras, recorders, and cell phones drain suddenly and unexpectedly in haunted locations. In most cases, this occurs in spite of the use of brand-new or recently charged batteries. Investigators hypothesize this occurs because entities use the energy in batteries to enhance their ability to communicate.

Cold spots are sometimes noted in rooms where paranormal activity may be taking place. The ambient temperature feels noticeably cooler in distinct areas even if there is no source for a draft. Paranormal investigators theorize that spirits gather energy from their surroundings in order to manifest in some way, and this is believed to cause cold spots.

Paranormal activity of this nature is difficult to document because it's based on one individual's experience. You may feel as though you are being watched or have been touched by something unseen. You might also feel a breeze even if you can't find a potential source for a natural draft. Some people have reported feeling dizzy, tingly or short of breath during a possible paranormal occurrence.

Many objects give off electromagnetic fields (EMF). High EMF from objects such as computers, plumbing, and wiring can cause explainable symptoms of paranormal activity such as headaches and hallucinations. Paranormal investigators use EMF detectors to determine whether high EM fields may be contributing to the activity experienced. In some cases, EMF detectors may suddenly display a spike in electro-magnetic frequency for no discernible reason. Many investigators hypothesize this indicates a spirit has come near the detector in question. Electronic surges such as cell phones searching for a cell tower or use of a walkie talkie can cause a spike on sensitive EMF detectors. While many believe EMF spikes may, indeed, indicate paranormal activity, parapsychologists believe EMF detectors should be used to rule out natural causes of possible paranormal experiences.

Noticing Sensitivity of Kids and Pets

A number of paranormal professionals believe that children and some pets are particularly sensitive to the presence of unseen spirits. Children may report interactions with spirits that adults relegate to the category of "imaginary friends," while pets usually react with fright and anxiety when focusing on a particular spot although nothing appears to the naked eye.

Ectoplasm is a word often used to describe a gel-like residue reportedly found at the site of an apparition or paranormal event. The existence of ectoplasm is a controversial topic. Historically, the substance was believed to be produced by a medium rather than a spirit entity. The ectoplasm would supposedly flow out of the medium's mouth or nose. The spirit would then use the ectoplasm to physically manifest. Skeptics believe that ectoplasm is nothing more than a prop used in scams perpetrated by charlatans who portrayed themselves as mediums during the Victorian era up until the late 1930s. Others believe, however, that such substances can and do occur unexpectedly in haunted locations.

Seeing Things Out of the Corners of Your Eyes

Do you notice movements that flit in the corners of your eyes, but when you turn your head to look straight on there's nothing there? This is often a sign of paranormal activity, as well. The movements are usually quick and shadowy. If you experience this a lot in a certain place, it may be haunted.

Another haunting symptom is smelling phantom aromas. You may notice the scent of cigar smoke in a non-smoking home, for instance, or you might notice the fragrance of perfume or flowers when none are present.

Sensing Something Feels Off

Sometimes the signs of paranormal activity are highly subtle. For example, you may just feel that something is "off." Some people describe this as a sensation of discomfort or a crawling sensation. It may feel like fear or terror, or you may just want to leave a place for no reason you can discern. These are sometimes signs you are sensing the presence of spirits.

If you are in a space and suddenly feel ill, such as experiencing a headache, dizziness, or nausea, this could be a sign of paranormal activity. This may be especially true if others experience as well. If the symptoms abate as soon as you leave or shortly thereafter, it could be a sign of a haunting.

A single sign of paranormal activity typically won't provide enough evidence for a thorough investigative team to declare that a location is definitely haunted. If the signs continue, however, it is important to document the activity you experience. If you are concerned, you may wish to contact a parapsychologist or a paranormal team for a formal paranormal investigation. 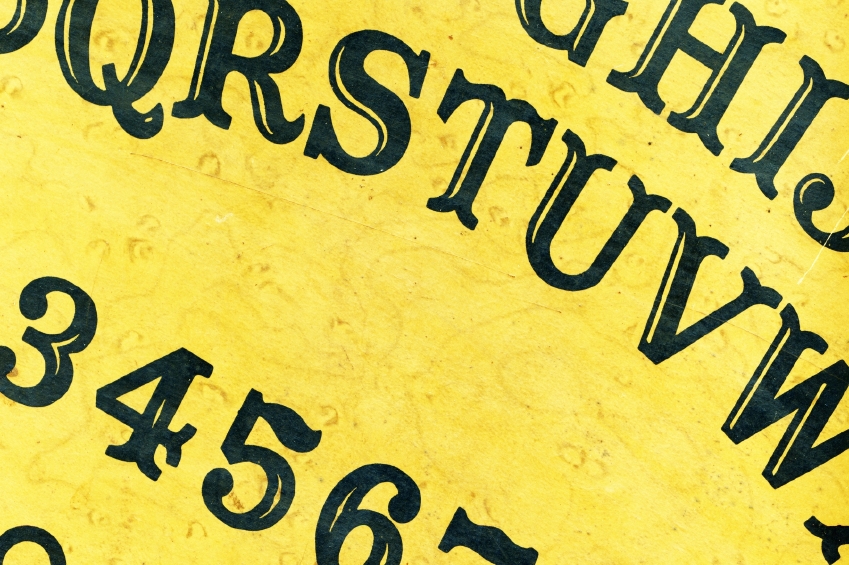 Up Next
Ouija Board Dangers
View previous slideshow again