Spiritual medium and advocate, Bonnie Vent uses channeling, an ancient form of spirit communication, in her work with spirits. She considers herself to be a spirit advocate and channels spirits through automatic writing and visual imagery.

Unlike most mediums, Bonnie Vent doesn't seek out the dead when she communicates with spirits. Instead, the spirits seek her out. This connection with the other side began when she was a child. Bonnie describes how she'd find herself staring into a candle flame without any idea why. She just knew it put her in a peaceful state of being. "I used to ask the candle flame yes or no questions," she says.

In 1987, Bonnie began to channel spirits through automatic drawings instead of traditional automatic writing. These drawings frustrated her since she had no idea what the spirit was trying to communicate. Then one day asked the spirit to write instead of drawing. Bonnie says, "After that, I received entire paragraphs of channeled information." This new process was powerful. She would hear the words before they were actually written and once finished, the spirit provided her with images that were similar to watching a movie, except it played in her mind.

Challenges Being a Spirit Advocate

Bonnie credits her mother giving her the title, Spirit Advocate. Most mediums conduct a reading for a living client with the desire to connect with a deceased loved one. In Bonnie's case, it's the reverse. The spirit seeks her out with the desire to connect with a living person. Bonnie explains the spirit sometimes gives her tasks they want her to perform on their behalf. Bonnie admits. "I do not have the recipient of the message sitting in front of me. This, of course, makes delivering the messages very difficult at times,"

Misconceptions about Ghosts and Spirits

According to Bonnie, the most common misconception people have about ghosts and spirits to disassociating them as people. She corrects this by saying, "They [spirits] are us. The spirit people that contact me are not demons or entities." She says the spirits are just like any person seeking a medium. The spirit has some kind of issue they need to resolve, much the same way a person seeking a medium has with a deceased loved one.

Bonnie conducts investigations of historical hauntings, such as the well-known Whaley House, Villa Montezuma. Cosmopolitan Hotel and, of course, the Hotel Del Coronado.

During a 2011 investigation at the Cosmopolitan Hotel (Old Town San Diego, CA), Bonnie channeled a woman she believes may have been the Lady in Red seen at the hotel. In addition, the cameraman noticed through the face recognition feature that his camera attempt to focus on a third person standing between Bonnie and one of the investigators.

Validation of the Beautiful Stranger

One thing that Bonnie is especially interested in is the validation of her encounters. She says the information she receives as a medium always amazes her when it checks out historically. " Validation is a large part of the work and very important to me, personally. I never expect anyone to take my word for anything," she says. The Beautiful Stranger has long been one of those mysterious hauntings that seemed to become more elaborate in the retelling over the past decades. Of all the validations she's had, the one for the Beautiful Stranger at the Hotel Del Coronado surprised her the most. According to Bonnie, the spirit wanted to make it very clear that she was not Kate Morgan as everyone claimed. Bonnie's research partner did some very deep research and discovered that the spirit was Mrs. Lottie Barnard. "She was registered by the front desk clerk as Mrs. Lottie Bernard. One letter was misspelled in her last name," Bonnie explains. Her team proved that the legend is completely wrong. "She is exactly who she claims to be," Bonnie says.

Out of all of the haunted historical sites Bonnie has investigated, the one that impressed her the most was the Hotel Del Coronado in Coronado, CA. She says the hotel has many resident spirit people who choose to remain there for assorted reasons. "We still have not fully completed Lottie's story either. She was not a suicide, so we still have to determine who killed her," Bonnie says. In that pursuit, another spirit person, claiming to be a laundress at the Hotel, told Bonnie that she had witnessed Lottie's murder.

In addition to investigating and work with historical haunted sites, Bonnie also channels celebrity spirit people. One of those is a spirit person who claims to be Michael Jackson, who came to her soon after his death. She believes the anecdotal evidence has mounted over the course of her interaction with the spirit person. "A distant family member has told me that she thinks that it is Michael Jackson," Bonnie says. Many Jackson fans have also told her the same thing. She explains that Jackson's fans are fiercely loyal and know his public persona very well. She has also channeled Marilyn Monroe and George Carlin.

It All Began With John Ritter

Her work with celebrity spirit people began soon after John Ritter died. He wanted her to deliver messages for him. This request took her into the entertainment industry and she's been channeling celebrity spirit people ever since. "I have had other celebrities contact me shortly after their deaths, and I work with living celebrities as part of my business," she says. It was actually the death of John Ritter and trying to deliver messages for him that caused me to venture over into the entertainment industry.

Unlike other mediums, Bonnie doesn't work with living people as her clients. She avoids that side of the business since she feels many people view that type of mediumship as taking advantage of the grieving and taking their money. She sticks with delivering messages from spirit people. "Money is never involved since they [spirit people] have none," she adds. She would prefer making money through a TV show that answers life after death questions. That, she says, is her dream job. 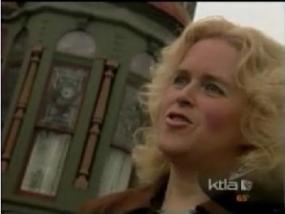 Bonnie was brought into a New Jersey project and a Texas project as a consultant. The house in the Houston area was seeing a great deal of activity. The house was owned by a Houston police officer and his wife. Bonnie says she affectionately dubbed it the "Poltergeist House". The architecture was much like the movie, and it was built over a cemetery. She went on to establish protocols for paranormal research and regular police evidence gathering to support a TruTV pilot called Phenomena Police. The show featured real active duty police officers investigating the paranormal.

Bonnie has appeared in numerous television paranormal investigations and documentaries. She was participating in this type of media before it was a popular choice for networks. Her goal wasn't to sensationalize the paranormal as many shows do by adding a horror aspect designed to frighten the audience. She recognizes that horror sells and television is a business, but her concern is when people take it too seriously. In her discussions with most production companies, she says, "They tell me a real show won't sell because people will not watch it. I think we can handle the truth, and hopefully, your readers will too."

Bonnie's Advice for Developing Your Abilities

Many people have latent talents or are just beginning to explore clairvoyant or psychic abilities. Bonnie advises you stay in contact with your own guides and inner voice. Some people refer to this voice as your higher self. Bonnie says, "They will teach you what you need to know. Just stay open and available."

There are some dos and don'ts that Bonnie shared, but cautioned these are ones she follows. For someone else, these might be different. The most important do for Bonnie is to be true to the spirit person connecting with her. "My job is to convey the messages as accurately as possible and to do my best to get them delivered where the spirit person wants them to go,' she says. For Bonnie, validation is important to her as a researcher. That said, her first priority is always to the spirit person and his or her well being.

Bonnie Vent didn't seek the mission as a spirit advocate. It appears that the spirit world chose her to be their intermediary to deliver messages from the other side. She is a bridge that connects the two worlds as she helps spirit people find closure.