As easy as it is to get caught up in the drama of the Ghost Hunters TV series on Sci-Fi, it's important to remember that the Atlantic Paranormal Society is an investigative organization. It's dedicated to learning more about things outside the realm of the typical human experience.

About the Atlantic Paranormal Society (TAPS)

The Atlantic Paranormal Society (TAPS) traces its beginning back to 1990 and the town of Warwick, Rhode Island. Founding member Jason Hawes once had a paranormal experience, one he mostly keeps to himself, that changed his perception of the world around him. Filled with a desire to dig deeper into the realm of the unknown, he began meeting with like-minded individuals in a loose-knit coffee klatch that eventually became know as the Rhode Island Paranormal Society (Rips). 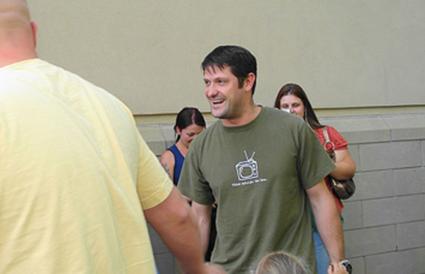 Another important future member of TAPS, Grant Wilson, also had an unusual experience that affected him profoundly, leading him to the group just a few years later. Together, Jason and Grant would become the guiding force behind a group of paranormal enthusiasts who would seek to investigate reports of paranormal activity and try to either debunk it or capture conclusive evidence of life beyond death. Through the years, this quest to understand the unknown led the members of TAPS all across the USA in search of true hauntings and other paranormal activity.

Although TAPS was primarily formed to study the paranormal, it became the group's mission to help people who felt their home or establishment was haunted by unknown, and sometimes unwanted, spirits. The group conducts investigations of the site using a number of electronic devices that can help gauge unusual energy levels and sounds the human ear is unable to capture.

Investigations are typically conducted over a single night although the group has returned to several locations that have warranted a further look. After the main body of an investigation is concluded, TAPS reviews all voice and image recordings to look for anything unusual. Sometimes it seems as though a ghostly image or voice has indeed been captured. It's then the team's job to try to find a reasonable explanation for what caused the anomaly. If no real-world explanation can be found, the image, activity or sound is determined paranormal in nature.

Any and all evidence is presented to the home or business owner for review, and the team leaders, Jason and Grant, offer their honest opinion about whether the location might truly be "haunted". Sometimes owners are relieved to find out there was a completely normal explanation for the activities they have witnessed. Other times, they are either shocked or elated to have their suspicions confirmed. The team never knows how an owner will react to the news they receive, so they always try to present their findings in as professional a manner as possible to avoid frightening their clientele.

TAPS states that they do not charge anyone for their services, and the group was initially run mainly on donations. Since the advent of the Ghost Hunters television series documenting the group's adventures, members that appear on the show presumably receive financial compensation from the Sci-Fi channel.

TAPS receives more calls for help than they can cover on their own. For that reason, TAPS has built a network of related societies, affectionately referred to as part of the "TAPS Family". Each society that joins the network must meet a set of guidelines found on the TAPS website before they can even be considered for membership. After that, TAPS reviews each application to decide if the group seeking membership is ready and able to become yet another branch of the network.

In yet another endeavor to report on paranormal happenings, TAPS also created TAPS Paramagazine, a bi-monthly subscription that covered virtually every angle of paranormal events, including UFOS, Cryptozoology and psychic phenomena among other issues. Each issue also provided a list of supposedly haunted locations for various states so readers could try their own hand at a little ghost hunting if they dared.

There is a wealth of information and opportunities at the TAPS website, The Atlantic Paranormal Society. Should you need help, you can search the TAPS family of investigators for one in your area.