True scary Ouija board stories are drawn from real reported and personal narratives. People often take to the internet to report their bad (and good) Ouija board experiences to help people see the dangers of the Ouija board. In all cases, the identities are changed in order to protect the privacy of the individuals, and these Ouija board true stories date from the 1980s to recently.

Ouija Board: It's Just a Hobby

This true Ouija board story is about a girl named Cindy who was only 13 . She was the middle child within a large, devoutly Christian family who lived in the mountainous country of northern Maine. She had three older sisters, a younger sister, and a younger brother. At some point during the eighth grade, a friend let her borrow a Ouija board one weekend, and that weekend Cindy and her older sisters played with the board. They did so in secret, late at night, because they knew how strongly their parents would disapprove. That weekend, the mysterious talking board mesmerized Cindy. Cindy became obsessed with it. She could think of nothing else and soon had a list of questions that she wanted to ask the board.

Cindy had an hour every day after school where she was alone in the house before her older sisters returned from high school. So one Monday afternoon right after getting home from school, she cautiously crept up to her room, set up the Ouija board on her bed, and gently laid her fingertips on top of the pointer. After just ten minutes of sitting quietly, the planchette started to jerk softly across the board. It spelled out, "H-I". Cindy's breath caught in her throat.

A shock ran through Cindy. Jake was a friend of hers who had died in a car accident in the fourth grade.

"Jake, is it really you?" Cindy sat up, her arms shaking with excitement. The pointer moved quickly up to "YES."

Over the next hour, Cindy held a conversation with "Jake." Every day after school, Cindy would race up to her room and have a conversation with Jake about her life and about her future. But after a few days, the conversations became darker and angrier. By the second week, Cindy had the impression that she wasn't talking with Jake, but instead with a dark and terrible imposter. Finally, by the end of the second week, the entity revealed itself as a demon and threatened Cindy that if she told anyone about their conversations, she would die. That Friday night, when her sisters got home, they found Cindy curled up in a corner crying. It took a week in a mental facility before Cindy could recover from the emotional damage that the "entity" caused her during those two fateful weeks of her childhood.

One summer, three middle school boys discovered a Ouija board in a trash bin outside a local apartment building. Tom, the oldest, was terribly cruel to the younger boy, Josh. He would often punch Josh jokingly in the arm, but so hard that it would bruise. Other times he would call Josh stupid or a "retard." The third boy, Chris, would avoid the abuse by remaining silent. Secretly Chris and Josh disliked Tom's behavior, but they tolerated it because they had no other friends. 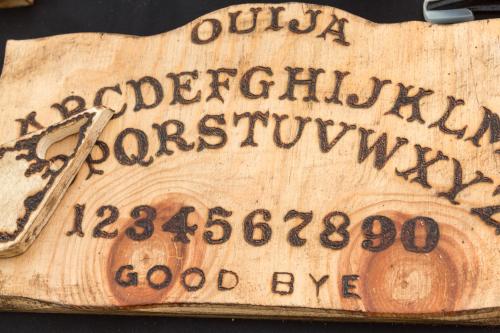 Communicating With a Spirit

That summer, the three boys took the discovered Ouija board to Tom's house where he was alone most of the time anyway. His father was always working, and his mom had passed away years earlier. As the three boys sat in the middle of the living room with their hands on the planchette, they became bored after twenty minutes of waiting. When they were just about to give up, the planchette budged. Finally, it spelled out "G-E-T A-W-A-Y."

"Get away? I live here," Tom barked. The planchette started moving more briskly in a figure eight.

"That's weird. I wonder what it means?" Chris said, glancing at Tom and Josh. He looked back at the board.

"Where should we go?" Chris asked.

Josh removed his hands from the planchette.

"Now ask it a question that only you will know," Tom ordered.

Josh immediately asked, "Who's the person who keeps hitting me?"

Tom gave Josh a nasty glare, but the planchette was already moving quickly.

"This is stupid," Tom said.

"Huh?" Chris said, staring at the board. "I think this question is for Tom." He glanced up at Josh and they exchanged confused expressions.

"D-A-D," it spelled again. Tom's breathing started to race, his face turned red and sweat formed on his brow.

"D-A-D," it spelled a third time. Tom jumped up and ran from the room crying. It was the first time Josh and Chris had ever seen or heard Tom cry. They only learned a few days later that Tom's father routinely abused him. Somehow, the Ouija board knew Tom's innermost secret.

The news headlines announced the town's descent into madness in March of 1920. In a small town in Southern California, police arrested seven people who had stripped nude and began to act "mad" after dallying with a Ouija board. Over the next several days, the madness spread like a disease throughout the town. One police officer joined the hysteria, stripping off his uniform and running into a local bank while screaming hysterically. A 15-year-old girl described her own nude and wild appearance as a result of her ability to communicate so effectively with spirits.

Terrified of the spreading madness, town hall officials brought in truckloads of mental health specialists to examine all 1,200 members of the populace. While the professionals attributed the madness to a shared hysteria, the city government decided to take no risks. Ouija boards were banned within the town limits (either possession or sale).

The Ouija Board Did It

In 1935, a man shot his wife four times in the back. Arrested by police at the time of the incident, the 78-year-old husband described his stressful relationship with his wife following her consultation with a Ouija board. His wife claimed to receive messages during weekly consultations of his infidelity with a neighboring woman. The board allegedly told her that he gave the woman a great deal of money. After each consultation, the wife would give her husband a dark look and announce that she'd caught him in yet another lie. Over the course of several weeks, the wife tied him to the bedposts with wires and whipped his body with knotted ropes. She used a burning poker to wound him and stabbed him in the shins with a knife. Finally, under the brunt of bodily torture, he confessed anything she wanted to hear when she put a gun to his head. Satisfied by his confession, she left the gun on the nightstand. Freed, yet still terrified, the husband seized the gun and shot her in the back before she could inflict any further harm. The courts ruled the murder a justifiable homicide since the husband was reasonably in fear for his life.

American Friends Possessed by Ouija Board

In 2014, three friends visiting family in Mexico decided to play with a Ouija board. Within minutes, the three began to report feeling dizzy, upset, and confused, and events quickly escalated. The young girl began to growl and thrash around, and the boys were also overcome: they reported symptoms including paralysis, blindness, and hallucinations. Terrified, the girl's parents ran to a local church and begged the priest to return with them and perform an exorcism, a not uncommon request from parishioners. But the priest refused because the young people did not attend church, and the family rushed home to call paramedics. The local safety officer reported that when emergency workers arrived, the patients were in trance-like states, flailing around and suffering from muscle spasms and making it necessary to restrain the victims. The friends were transported to a local hospital, where they were given painkillers and other treatment, and finally released. 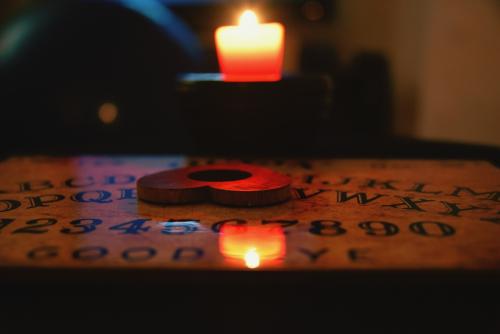 Pam was brought up in a religious family and thought she had a stable life until her mother began to use a Ouija board. Pam had been away from home for a few weeks, but when she returned, she was shocked at the change in her mother. The quiet, pleasant woman was now frightening to Pam. Her mother had begun to consult a Ouija board, and taking the board everywhere with her and asking the board what to do each time she had to make a decision. Pam remembered trying to fall asleep one night while having distinct feelings she was being watched. Suddenly, Pam saw her mother in the room, and when Pam complained about her fears and hoped that God was watching over her, her mother laughed and said that something was protecting Pam, but it wasn't God. Later that night, Pam said, "I heard a party going on downstairs. I looked at the clock and it was one in the morning so I got up and went downstairs, peeked around the corner and the plastic piece on the board was going by itself and several different voices of men and women were coming out of my mom." Pam found her mother's Ouija board and burned it, but that didn't stop her mother, who bought another board and kept it with her for years. After Pam's mother died, the Ouija board disappeared from the house, but Pam reports that she is still being haunted by whatever it was that her mother summoned through the board.

Most people consider the Ouija board nothing more than a toy. However, the mystery and psychological power that the board can have over people is a serious concern. Some people claim the board has the ability to predict the future accurately, or that it harbors terrible and evil forces. Still others believe that it provides a channel through which the user can communicate with spirits of the dead. Whatever you believe, Ouija board stories can offer some insight into what it's really like to interact with this mysterious board.

67
Comments
© 2006-2020 LoveToKnow, Corp., except where otherwise noted. All Rights Reserved.
Resources, Advice & Tips for COVID-19
Read More
7 Ouija Board Stories That Are Creepy but True