Many alien enthusiasts over the years have sought to prove the existence of aliens through DNA testing. While there still isn't solid proof, many of the following examples show the state of the search for alien DNA to help you understand more about aliens.

Is It Alien? Starchild Skull DNA

The controversial work of the late Lloyd Pye includes the Starchild Skull. Pye gave numerous presentations about the skull, always giving the history behind the find. In 1930, a 15-year-old girl found the two skeletons in an old, abandoned mine located approximately 100 miles southwest of Chihuahua, Mexico. She retrieved the two skulls and kept them hidden until her deathbed bequeathal to a couple, who later bestowed the skulls to a younger couple interested in UFOs and aliens. The couple contacted MUFON, who put them in touch with Pye.

Numerous DNA tests were conducted on the Starchild skull, and each test drew similar conclusions:

The database used was the US National Institutes of Health BLAST that holds all known DNA.

With testing and examination by a geneticist, Pye developed theories about the origins of the skull. Testing found the skull had some human DNA, and some DNA that had no significant similarity to known DNA. There were 342 base pairs that were not in the database (BLAST).

Pye hypothesized it could have been an alien born to a human mother. According to Pye, a woman with mitochondrion disease can have a child by using the DNA of the father mixed with that of a healthy egg donated by a third party. The egg is stripped of its chromosome package, and the DNA of the mother and father is used to create what's known as a zygote. This is placed into the egg. The fertilized egg is then implanted into the mother, who carries the embryo and delivers her baby via the donated egg. In this case, the mother's DNA is present as well as the father's. Pye suggests this is how the Starchild was created with a human mother and two aliens.

For a more complex discussion of the Starchild's DNA, Pye made an informative video:

Skull Shape Not From Deformity

In his presentations, Pye points out several inconsistencies with the skull not consistent with a human, which include:

Zecharia Sitchin (1920-2010) is known for his translations of the ancient Sumerian and Akkadian clay tablets, as well as his theories of the giant race known as the Anunnaki. He wrote several books on this race said to be from the 12th planet know as Nibiru or Planet X. According to Sitchin, the Anunnaki genetically engineered the existing habitants on Earth to create a slave race to mine gold and other minerals to refurbish a gold shield needed to protect their planet.

Under fire by naysayers, Sitchin maintained his interpretation of the tablets and was convinced the human genome had been tampered with by the giant civilization of the 12th planet. In his search for DNA proof, he pursued DNA testing of the Sumerian Queen Pubai (unearthed in the 1800s) from the Natural History Museum in London under his Goddess of Ur Genome Project. According to Lloyd Pye, Sitchin wanted to gain approval to conduct genetic testing on the skeletal remains. Sitchin hoped to prove that she was a descendant of the Anunnaki through her mitochondrial DNA. He hoped to make a comparison between Puabi's DNA and human DNA. Sitchin further believed Puabi was a direct descendant of Anunnaki goddess. DNA testing has not occurred on the remains. 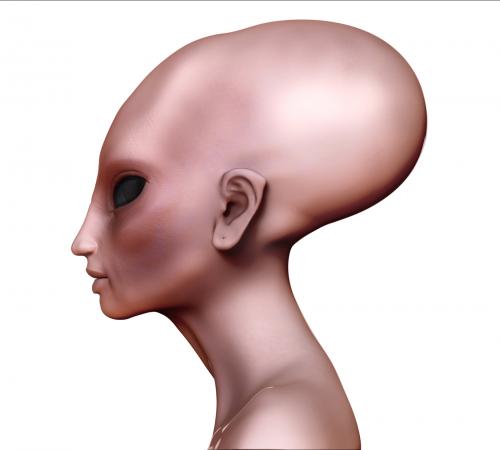 Preliminary DNA tests returned unknown results. The geneticist conducting the tests stated the mitochondrial DNA (maternal DNA) had mutations that could not be identified as belonging to any known human, primate, or animal. Express reports that a second series of DNA tests were performed, and controversy surrounds this set as well.

Many believe ancient people intentionally forced their skulls to grow in the elongated form by binding the skull between pieces of wood. This phenomenon is found around the world within civilizations that had no contact with each other. Many speculate the bindings were undertaken as a way of emulating alien visitors that were often deemed as gods.

The skull samples were sent to Canada (three labs) and the U.S. (two labs). The scientists were told the samples had been taken from ancient mummies. Dated around 2,000 years old, the results indicated the skulls were of European and Middle Eastern origins. This discovery has contradicted historical data about when Eurasia travelers first ventured to the Americas. No indication of alien DNA is found within the skulls; however, the skull construction disproves the binding theory since the foramen magnum (hole at base of head connecting to neck and spinal cord) doesn't match that of a human skull. The skulls also have different eye sockets and are missing a connective tissue joint between two parietal skull bones found in human specimens.

Cornell University Library holds a paper written by Vladimir I. shCherbaka and Maxim A. Makukovb on the possibility of a Wow signal hidden within the human genome. In 1977 SETI (Search for Extraterrestrial Intelligence) discovered a radio signal in outer space that was dubbed the Wow Signal.

shCherbaka and Makukovb suggest that a similar Wow signal might be embedded within the human genome. They explain in their paper that, "Genomic DNA is already used on Earth to store non-biological information." They point out, "...the machinery of the genetic code experiences exceptionally strong purifying selection that keeps it unchanged over billions of years." They believe this would be a reliable way to store such an alien signal. Currently, no proof exists of a Wow signal in human DNA.

Not all reports of alien DNA refer to extraterrestrials. Recent scientific breakthroughs in the human genome have revealed some startling information about the human genome, specifically the DNA.

In scientific terms, DNA strands that are not considered part of modern day humans are dubbed "alien" for obvious reasons. In March 2016, Nature World News highlighted a scientific paper about "alien DNA" found in humans. Very quickly, the news went viral being touted as proof of alien ancestry.

The truth about the "alien DNA" discovered are ancient viral strands of HERVs (Human Endogenous Retroviruses). The paper was published in Proceedings of the National Academy of Sciences and announced, "the human genome contains at least nineteen pieces of ancient viral DNA." These ancient retroviruses were discovered in 2 percent of the people tested for the study.

It's easy to understand that over the course of history, humans have suffered from a huge variety of retroviruses. As with many retroviruses, some of the modified genome has been passed down to descendants.

Scientists examined the 145 alien DNA and reported that 17 were HGT (Horizontal Gene Transfer). HGT refers to the genes that are transferred from organisms that live in the same environment.

This discovery negates the commonly accepted theory that humans only receive their genes from ancestors. The study proves evolution is an ongoing process that directly binds human and animal life to their environments.

Scientific American republished a 2014 article from Nature about scientists at Scripps Research Institute in La Jolla, California successfully creating the first alien DNA life in a lab. It took 15 years of research to accomplish this feat. The scientists took bacterium and engineered it to contain what is termed as, "unnatural genetic code."

The article explains DNA is written with only four letters: A (adenine), T (thymine), C (cytosine), and G (guanine). These are what the subunits are labeled for all living organisms. Each of the four letters represents these amino-acids that become the building blocks for proteins. They are paired to form a double helix with the A and T molecules always together and on the opposite strand, the C and G proteins always together.

Scientists expanded these letters to include their creation of two new and foreign DNA that they placed into the genome. This work provides a platform for the synthesizing of cells. It could lead to the ability to create new drugs that target specific disease cells. For example, a toxic amino acid would be introduced to a protein that would then be deadly to cancer cells.

The search for alien DNA on Earth continues as science and technology expand with greater understanding. New techniques, methods, and equipment have allowed for greater testing of suspected remains. Perhaps one day, technology will advance enough to either prove or disprove some of the skulls are alien.