Eye of newt has many uses in magic and casting spells. Like many old-world spell ingredients, eye of newt was a code phrase for a common ingredient - mustard seed.

Many accused of being witches were herbalists and were strongly connected to nature and the arts. Many remedies and potions were guarded secrets as were witches' spells. It's believed that codenames for herbs and other plants used in both potions and spells were created to protect the knowledge from those who would misuse it.

Shakespeare and Eye of Newt

This practice proved creative fodder for Shakespeare much to the outrage of witches. Shakespeare made eye of newt and other coded ingredients famous in his play, Macbeth.

In Macbeth, three witches brew up a spell to conjure ghosts. Some of the ingredients they toss into the cauldron are poetic sounding with a deliberate flair of the obscure and mysterious, such as "Eye of newt, toe of frog, wool of bat, and tongue of dog." Each of these is a code phrase for very simple ingredients:

Shakespeare and His Play Cursed by Witches

According to the Royal Shakespeare Company, Shakespeare did extensive research on witches and the spell he portrayed in his play was a real spell. This infuriated witches, who retaliated by cursing Shakespeare and his play before it was ever performed. Disasters followed, including two main actors dying. The curse has followed the play production through the centuries and many in the industry refuse to say the name, Macbeth, much less perform the play.

How Eye of Newt Is Used in Magic 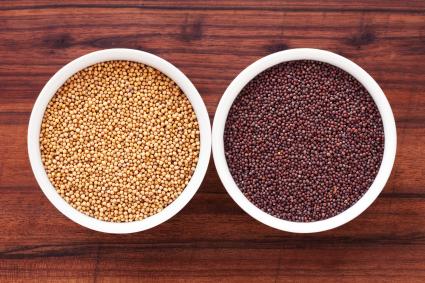 Eye of Newt for Protection Spells

The Llewellyn publishing website features a brief explanation of how mustard seeds are used in spellwork and as good luck tokens. Protection spells use mustard seeds as ways to prevent the wearer from succumbing to diseases and simple things as headaches or the common cold. A mustard seed footbath is recommended as well as using the seeds to ward off negative energies and many other uses for personal protection.

Black mustard seed is used in various spells to confuse and upset the scales of balance when a person is under seige by their enemies. There are various ways this tiny seed can disrupt the plans of evil intentions.

Where Your Enemy Walks

Original Botanica advises spreading black mustard seeds in places where your enemy frequents. This is described as sprinkling the seeds in the path of your enemy. This could be any route your enemy takes on a regular basis. The site also offers a Win in Court Kit.

Alchemy Arts explains how to use black mustard seeds to confuse a business enemy. The spellworker is advised to mix the seed with Sulphur powder and while walking backwards into the business to sprinkle the concoction around them. The results given include, causing those in charge to make poor business decisions and pitting employees against each other through misunderstandings.

A well-known protection against burglars is to spread red mustard seeds around your home. Some spellworkers prefer to sprinkle the seeds outside to encircle the house.

On page 198, in the book, An Introduction to the Popular Religion and Folklore of Northern India, author. W. Crooke writes how the red mustard seed is mixed with salt as a cure for patients. Once combined, the person waves the mixture around their head and then tosses it into a fire.

There are many ways eye of newt can be used in magic spells. You need to select the right color of mustard seed to ensure you cast the spell correctly.