The Ouija board and similar style talking boards are easy to use, even for people using them for the first time. Ouija boards require little set-up and only have a two parts, and you can use them virtually anywhere as long as you have somewhere to sit face to face. By following a few simple steps, you'll be using Ouija in no time.

1. Choose a Ouija or Talking Board

Use any Ouija or talking board you like; they all work about the same way. You may also find these games called spirit boards, witch boards, or something similar. There are even online versions, although many people prefer to be hands-on with the game.

2. Gather What You Need

It's ideal to have at least three people to play Ouija, although it is possible to use it alone or with two people. To play, you'll need the contents of the talking board game as well as a place to set up.

To set up, place the board on the table with the letter side up and place the planchette on top with the felted feet touching the board. You can put the planchette anywhere in the center of the board. Place two chairs on either side of the board, facing one another. Other players can sit or stand elsewhere nearby. If you don't have a table, then set the two chairs facing one another directly. In that case, players will sit with their knees touching and the board balanced in their laps.

4. Choose the Sitters and the Medium

Choose two people who will touch the planchette (the sitters). One of the sitters should be the designated questioner; that is, the only person allowed to ask questions of the Ouija board during the session. This person is sometimes referred to as the medium.

5. Designate Someone to Record Responses

Choose a third person as the recorder. This person will write the questions and record the answers as the planchette slides to them.

Sitters should sit on either side of the table with their index and middle fingertips of both hands resting very lightly on the planchette. Their touch should be so light you can slide a piece of paper under the fingertips or shine a beam of light beneath it. Elbows need to be held at the sides, with elbows and forearms off the table. The recorder needs to be close enough to the board to see responses as they planchette slides to them. Other players can be anywhere, but they need to not distract the sitters and the recorder.

When you're ready, the medium can begin to ask questions. These can be open ended or yes or no questions. Avoid questions you don't want to know the answer to, or those that may be dangerous to ask the board. Allow the planchette to move without trying to influence it. Sometimes it moves very slowly, sometimes quickly, and sometimes not at all. Give it time to respond to a question before moving onto the next. If it doesn't move after ten minutes or so, close the session (see below), and either put the game away or choose new sitters and a new medium.

Each time the planchette points to a response, such as a number or letter, the medium should call out the response for the recorder to write on the paper. This way, you can be sure you're recording the responses accurately. The tip of the planchette may point to a letter, or the planchette may stop with a letter centered in the circular window. Either is fine; typically, your board will do one or the other, but not both. 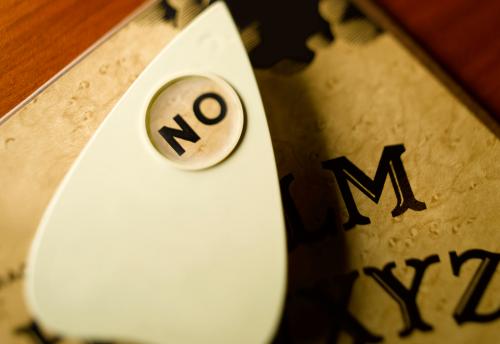 When you're ready to end the session, or to switch sitters and medium, close the session before starting a new one. To do this, say, "Thank you for communicating with us," and then deliberately slide the planchette to "Good-bye." Pause there for a few seconds and then lift the planchette off the board and turn it upside down with the feet up off the board until you're ready to start a new session. This closes ties to the energy of any entity with whom you've been communicating.

Don't leave the board sitting out when you're not using it. Instead, wrap the planchette in a cloth so it doesn't touch the board, and put both pieces back in the box. Store it in a closet or drawer until you're ready to try again.

Beyond basic playing, there are some things you can do to make your session go more smoothly.

Using a Ouija Board the First Time Is Easy

Ouija boards are a fascinating tool. Some people believe they communicate with spirits or supernatural beings, and others think the sitters subconsciously move the planchette so no spirit communication occurs. Regardless of what you believe, it's interesting to use Ouija and other talking boards either as a game or as a way to communicate with beings from other realms.

1
Comments
© 2006-2020 LoveToKnow, Corp., except where otherwise noted. All Rights Reserved.
How to Use a Ouija Board for the First Time