The term ley lines was coined by archeologist Alfred Watkins and used to describe various geographical alignments of the world's ancient megaliths and various monuments. Unlike the modern use of the word that has a spiritual connotation, the Watkins ley lines also included waterways, naturally forming ridges and various routes ancients used as trade routes and migration pathways. Watkins' theory was limited to the British Isles, although modern use has globalized his concept.

What Does Ley Mean?

There are many stories surrounding how Watkins choose the term ley for the lines. One commonly accepted reason is that ancient trails or pathways intersected sites with names that had ley as their last syllable. Another suggests the use of ley as a derivative of the word lea, an open meadow or glade. These lines connected the ancient sites as tracks or trails through dense forests and natural geological outcroppings and mountain ridges.

Watkins hypothesized that these lines were simply line-of-sight navigational tools that were followed by Neanderthals and subsequent generations. These trails or trackways were later marked with various monuments and megaliths. He published two books on his theories, Early British Trackways and The Old Straight Track.

In 1969, John Michell introduced the principles of feng shui landform when applied to ley lines as points of energy. His theory encompassed the philosophy of land forms affecting the surrounding land, specifically the lines.

After publishing this theory, Michell's hypothesis that powerful energy emanated along the ley lines was eagerly embraced and others began to connect the dots. The theories grew. Soon, a spiritual component of the ley lines resurfaced. It wasn't a new concept since ancients believed in basic energy points and marked them with monuments and carved stones. It was generally agreed that rituals were held in these areas. Michell's work brought new perspective that these lines traveled around the Earth and where they intersected one could find unique and unusual energy vortexes.

Ley lines that intersect are said to create vortexes or spirals of energy similar to those believed to exist throughout the human body in what's known as chakras. One theory that ley line researcher David Cowan put forth is that these spirals or vortexes are either negative (black spirals) or positive (white spirals), much like the theory of yin and yang energy.

How To Find Ley Lines

Two popular ways to locate and identify ley lines include using Google Earth or the ancient divination art of dowsing rods. Using the tools together, you can also chart the ley lines of your property, home and business/office.

One way to find ley lines is with a combination of Google Earth and a plug-in created just for ley line exploration. Bethe Hagens on VortexMaps provides the downloadable UVG grid plug-in that can then be used with Google Earth to reveal ley lines and the Earth grid. In addition, Hagens explains how you can plot and add your own ley lines and grids by using Google Earth Plus and its push pin icon. 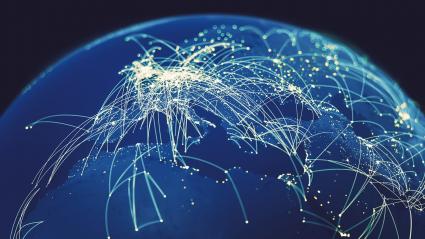 How to Use Ley Lines

Many energy workers believe that you can tap into the energy of the lines in order to conduct various healings and transformations. Some boost their individual abilities by connecting with specific ley lines.

Some energy healers use the energies of the lines to practicing healing techniques. The theory behind using ley lines in this manner is based on the energy meridians used in acupuncture and other eastern healing arts. Healers believe that this tap line into a ley line serves as a conduit of that massive energy that can be transferred to others. Therefore, when properly directed, this energy has the power to heal disease by energizing and correcting malfunctioning body meridians.

Some people practice ley line tapping for a defensive or offensive purpose. These individuals claim to use the stream of energy to zap negative energies directed by an attacker in an attempt to harm an individual.

When used as a defensive mechanism, the connection to the ley line energy is used like a fire hose to spray the ley line energy against the attacker and the energy being directed at the victim. Once the battle has been won, the victor simply turns off the hose nozzle and disengages the link in the same fashion you would unscrew a hose connector to a spigot.

There is a direct correlation to ancient burial sites and ley lines. The dead were placed outside the lines. There are two types of ley lines:

According to ley line researcher and author David Cowan, these lines were once called faery paths. In his research Cowan discovered that funeral processions to the church cemetery were taken along known faery paths. Not all faery paths were straight; many were circular. Cowan subsequently believes that this was done to ensure any negative energy of the body would be neutralized with this placement to both straight and cupped ley lines.

Some theorists have proposed that ley lines are also found in outer space as well and on other planets and this points to everything in the Universe being connected though an intricate power grid of ley lines.

The intersection points of these lines bring a concentration of energy known as vortexes or even wormholes that allow instant travel between worlds millions of light years away. Some conjecture that UFOs and beings of other worlds or dimensions are able to travel to and from our planet through these vortexes.

Science has yet to recognize the validity of ley lines, but those who have tapped into this earth energy don't require scientific proof. From the Druids to various ancient civilizations, these lines have been marked by what many believe to be sacred symbols that have withstood thousands of years and likely will survive many more.

4
Comments
© 2006-2020 LoveToKnow, Corp., except where otherwise noted. All Rights Reserved.
Resources, Advice & Tips for Covid-19
Read More
Ley Lines and How to Use Them