Rainbows have many spiritual meanings. From Biblical to prophecies, rainbows hold quite a few promises and even good luck. Rainbow colors also have different meanings depending on the culture and symbols. From the colors of orbs to auras, the colors found in a rainbow touch some area of everyone's life.

Anyone who has read the Bible knows the story of Noah's Ark and the Great Flood. After 40 days and nights of continuous rain, the world was flooded. Noah, his family and an ark filled with pairs of animals survived. When the land dried, the Ark came to rest. Noah and his family emerged from the Ark and were met with a rainbow. It's written that God made Noah a promise that he would never again flood the Earth. He created the rainbow as a symbol of his promise to humankind.

A general spiritual meaning associated with rainbows, in general, is a bridge. The arc of a rainbow appears to create a sky bridge that connects one side of the earth to the other. This is often viewed as a symbol that you can move from one moment or situation in your spiritual development to the next level.

Some people believe rainbows signify a new beginning. This can be an unexpected turn or an omen for anyone struggling with a life crisis. This is often interpreted as a spiritual sign they need to break from their current path and start over. The appearance of a rainbow provides them with the needed encouragement, perhaps sent by their spirit guides or God, depending on their faith.

Some people who feel they need to make a change find the sudden appearance of a rainbow as a sign to take that leap of faith. The arrival of the rainbow delivers a flicker of hope that it's possible. 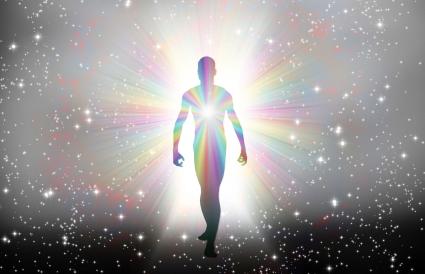 The Buddhist follow Buddha's teachings of ascension. This requires raising their frequencies to the level of the light body that once activated will transcend into the rainbow body. The human body gives over to the rainbow body as it transforms in the ascension process of returning to God or depending on your belief - the Source of all life. This immortality allows the individual to assume any shape and can manifest in the physical when desired. It is said this is what Buddha and Jesus the Christ achieved. It's reported by witnesses of monks who achieved rainbow body that their bodies vanish within a few days of their deaths.

Many cultures view rainbows as messages of hope sent from the spiritual realm. Some view rainbows as angelic signs that they are not alone or an omen in answer to a spiritual matter. These rainbows appear just as the person needs a spark of hope or a boost of encouragement. They find it difficult to argue with the timing of such omens.

Some people take great comfort when a rainbow appears during a funeral. They feel it is a sign of the resurrection or a sign of God's love. Some believe it's a message that their loved one has made it to heaven and sent the rainbow to let them know.

For some people on a spiritual path, the appearance of a rainbow can signal a spiritual inner awakening. This process of waking up to the spiritual realm holds promises of new knowledge and truths. It is a sign of hope and promise.

Double rainbows are fairly common to see, but only five triple rainbows have been reported in the past 250 years. A rarer rainbow considered a myth is four (quaternary) rainbows. 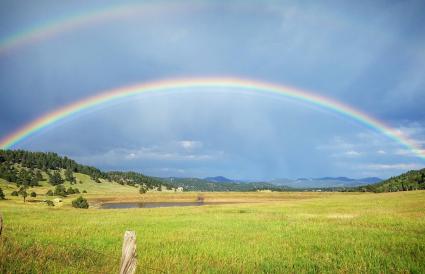 Double rainbows are believed in some cultures to have a double meaning of good luck and change. Some Eastern cultures view the inner arc a symbol of their physical world while the outer (upper) arc is the spiritual world and the two are connected by the joining of the arcs.

Some cultures believe a triple rainbow that is highly rare means you will share the good luck it brings with another person. Others believe it signifies three times the good luck.

The meaning behind the rare four rainbows is significant to the person considered blessed to witness this phenomenon. Some believe it doubles the meaning of two rainbows. Whatever the message, it is considered a powerful omen that delivers hope, luck and blessings.

The appearance of a rainbow cloud can be breathtaking. Many people believe these are angelic messages of love and hope.

A sun halo rainbow is commonly seen. When the sun has a rainbow halo, some people interpret the meaning to be one of great abundance yet to come. Others translate this messaging as the fulfillment of a particular prophecy.

Cultural Meanings of the Rainbow

Rainbows are symbols of luck and hope in many world cultures. Oral history tells the reasons why the rainbow became such an important symbol.

Irish Pot of Gold at End of Rainbow 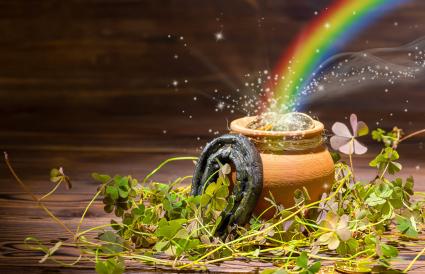 Perhaps the best-known cultural rainbow story is how the rainbow leads to a Leprechaun's pot of gold safely tucked away at the other end of the rainbow. One version tells how fairies placed a pot of gold at the end of every rainbow and commanded leprechauns to safeguard it.

How the Pot of Gold Saying Started It All

The mythology of the rainbow and pot of gold evolved over time. Another version is found on the Michigan.gov Kids' page. This story apparently emerged from a seventeenth-century saying. As a way to emphasize something was completely out of the scope of possibility. A person would remark that it was as likely they would find a pot of gold as they could find the end of a rainbow.

In Norse mythology, Bifröst is a rainbow bridge. This colored arc connects the Earth and Asgard (the realm of Nordic gods). The gods travel to Earth via the bridge and Earthly warriors will eventually join the gods during Ragnarök (apocalypse) in the final battle.

In Asian cultures, rainbows are generally viewed as good luck omens, but not always. Feng Shui guru Lillian Too explains that a double rainbow signifies meaningful and great things coming your way with more to follow.

Some cultures view rainbows as bad omens. Geographical locations that suffer from periodic floods or cyclones don't necessarily agree that rainbows are symbols of good luck. According to The Old Farmer's Almanac Book of Lore, you should never point at a rainbow or you'll suffer bad luck!

A rainbow is a colorful unique natural phenomenon that inspires with its beauty. The various colors take on significant spiritual meanings for auras, chakras, and orbs. Each color in the human aura has a specific meaning as well as a rainbow color aura. Aura colors are tied to spiritual interpretations as well as signs of health.

The Many Spiritual Meanings of the Rainbow

There are many interpretations and spiritual meanings of the rainbow. Surprisingly, different cultures have similar interpretations while individuals often assign their own beliefs what a rainbow signifies when they witness one.

1
Comments
© 2006-2020 LoveToKnow, Corp., except where otherwise noted. All Rights Reserved.
Spiritual Meaning of the Rainbow