Voodoo is not a superstition, but the foremost and fully sanctioned religion of Haiti. As with any religion, those who practice Voodoo are devout and sincere in their belief. The word Voodoo means spirit. Anthropology researchers believe the West African religion of Voodoo (Vodun) is over 6,000 years old with 60 million people practicing this ancient form of spirituality. However, modern Voodoo, especially Haitian Vodou, is a strange combination of this ancient religion blended with Catholicism.

The Ritual of Voodoo Possession

The possession of a person by voodoo spirits is done during voodoo rituals and is considered a sacred act for those who practice Voodoo. Many scholars, such as Ira Lowenthal ("Ritual Performance and Religious Experience: a Service for the Gods in Southern Haiti" Journal of Anthropological Research 34, no. 3: 392-414) explains that the idea of possession in Voodoo isn't so different from the ideology of the Holy Ghost or Spirit entering and taking possession of a Christian believer.

During a Voodoo ceremony, a spirit (Loa) will enter (ride) the individual. The person being possessed considers being chosen by the spirit, to ride her/him as a horse into the physical world, to be one of the highest honors that can be bestowed on him/her. Possession is seen as a way the person is integrated into the community or group. The ceremony itself works as follows: 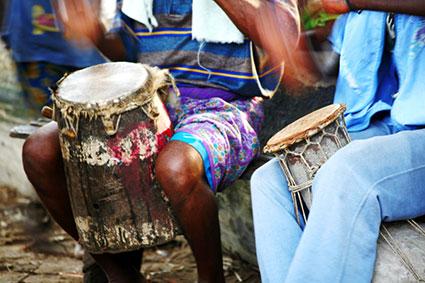 In Louisiana Voodoo and Haitian Voodoo, the spirits that serve as go-betweens for humans and God (Bondye) are called mystères or the invisibles. These spirits are also commonly known as Loa or Lwa.

These spirits aren't to be confused with angelic beings or saints. Each spirit has his or her own personality, just as a human with very specific likes and dislikes. Each Loa has its own symbols that are used in Voodoo rituals as well as specific dances and music. Webster University lists all the Loa by name along with their quirks for rituals, special objects, such as a conch shell used during a Voodoo ritual to call the spirit Agwe: (Agive) or that Ogoun's favorite day is Wednesday. Some loa are inseparable like Sogbo (lightning) and Agau (violent tremors and thunder). It's knowing, honoring and adhering to these nuances that give the ceremony its best possible outcome.

How Spirits Interact With the Possessed

If the spirits accept the invitation into the circle, one or more of the dancers will often fall to the ground in what appears to be convulsions. Their dancing mates will assist them in regaining their footing and according to those who've witnessed this ritual, the person will begin to move and act differently as the spirit takes control of his or her body. 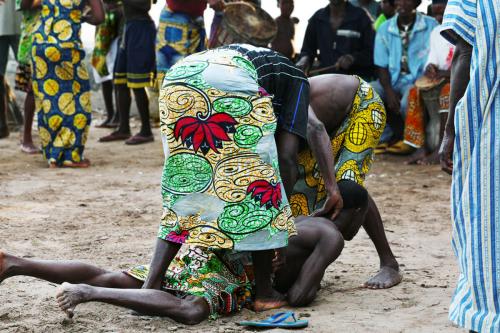 Most of the possessed experience glossolalia (speaking in tongues). This phenomenon is often witnessed in other religions, including Christianity. The purpose of the possession is for the spirit to communicate more easily with the person. The spirit may advise the possessed about his problems, give a prophecy or warning. Sometimes the communication is in the form of a dream. Often the priest or priestess receives messages from the spirit(s). According to Dr. Gerald Murray of the University of Florida (Voodoo in Haiti), the main purpose of the possession is to assist in diagnosing and healing illnesses.

The ancient form of Voodoo had none of the Hollywood trappings of Voodoo dolls, zombies and other black magic manifestations, however, these do exist in modern Voodoo. According to Dr. Murray, a Voodoo doll isn't necessary. Simple items from the intended victim, such as hair, fingernail clippings or a piece of clothing are sufficient for casting a spell.

Black magic rituals for possessing another person aren't considered impossible but aren't the mainstream of Voodoo. Black magic and white magic are two distinct areas and most who practice white magic avoid black magic completely. Most Vodou priests and priestesses don't delve into these areas, although some do.

Still, there are cases of people professing to be cursed or possessed by Voodoo magic. Possession isn't confined to Voodoo. Most of the world's religions embrace this belief, especially the Catholic Church with demonic possession.

Many believe that the spirits are so powerful they can possess a corpse and make it move to its demands. The tales of zombies follow Voodoo and one scientist claims that these can be traced to a potion made from a puffer fish.

Ethnobotanist and anthropologist Dr. Wade Davis proposes that the potion is the method used to create zombie-like effects. Davis contends that it's through this potion that the person succumbs to the will of the sorcerer. Davis's theory is considered controversial among some scientists.

There is a litany of symptoms of possession through black magic Voodoo. A few of those include:

There are other stages in a possession process that take the person in a downward spiral of bad health, illness, disease and eventual death.

How to Counter a Black Magic Voodoo Spell

Most Voodoo practitioners advise seeking the help of a Voodoo priest or priestess to break the spell. Both are believed to have direct lines to the spirit world. The spirits are there to help and heal, so most people turn to the priestess or priest for assistance.

Possession for Healing and Wisdom

To understand the purpose and function of Voodoo possession in its intended form you must understand the basis of the Voodoo religion. The premise of Voodoo is to blend the spiritual world with the physical world in an effort to further individual growth. The spirit world in Voodoo is invited to "ride" the individual like a horse, to eat the foods prepared and to impart wisdom, advice and healing energy to the ill and suffering.