Aura photography has been experiencing something of a renaissance in recent years. The original idea for taking pictures of the human aura arose during the Spiritualism era with various attempts using different types of cameras, photographic plates, and radiography. Today's aura photos, however, use different methods that may just capture something of your spirit in a picture.

Aura photos are believed to capture a representation of your spiritual energy which expresses as bands of colors surrounding your body. How the images look will vary depending on the system used to take your photo. However, generally after an aura photography session, you'll receive an image of your head and shoulders against a black background with a haze of colors surrounding and partially covering you. You will likely also receive a printout that helps you make sense of the colors and shapes of your aura in the photograph.

Where to Get Aura Photos Taken

Aura photography is often available at metaphysical, psychic, and energy healing fairs. Other places you may be able to have aura photographs taken include:

It's important to note that while you may find online sources or apps that claim to capture your aura, these are entertainment-only programs that don't use any bioelectrical data to generate an aura photo. Most likely use either basic information gathered from questions and answers, or they randomly generate colored patterns over and around an image of you.

Near the end of the 19th Century, Czech scientists began experimenting with a photographic technique called electrography, publishing photographs of leaves with a glow around them. In the 1930s, Russian engineer Semyon Davidovich Kirlian and his wife Valentina took this a step further, creating what appeared to be the first viable means of capturing the human aura in a picture. The process didn't use a camera. Rather, it involved placing a piece of photographic paper on a metal plate, placing an object on the paper, and then applying a high-voltage current to the plate. The result, a Kirlian photograph, showed a brightly colored corona around the object which was interpreted as its aura. Kirlian photography captured these electrical emissions around diverse objects ranging from the human hand, to plant matter such as leaves, to inert objects such as coins. Publishing their results in the 1950s, the Kirlians' work didn't come to Western awareness until the 1970s. Some still use the process today although it's typically too cumbersome to use for members of the public. Therefore, it's unlikely you'll encounter anyone taking actual Kirlian photographs using the process outlined above. 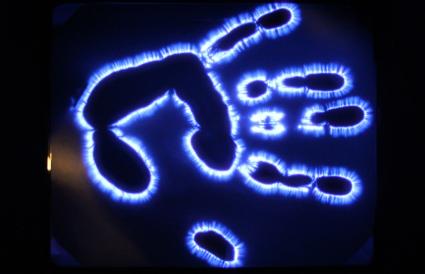 Electrography and Kirlian photography was cumbersome and only allowed for images of items in contact with the photographic paper, meaning it was impossible to capture a portrait style aura photograph of an entire person. This led to the necessity for new devices including the AuraCam.

In the early 80s, engineer Dr. Guy Coggins developed a device he called the AuraCam that allowed the photographer to take a non-contact portrait-style aura picture, and an updated version of these cameras is still used today by aura photographers. The process of taking an aura photograph using this device involves capturing a double-exposed Polaroid-style image while the subject sits for the photo with their hands touching two biofeedback receptor boxes. Two photos are taken; a simple portrait and ten seconds later an image of a color cloud generated by data from the biofeedback boxes and colored LCD lights. The cloud is then superimposed on the portrait, and the result is a printout of an aura picture representation. You can see examples of AuraCam aura photography on the Aura Imaging website. It's important to note these images are not actual images of the aura, but rather representations generated from colored LCD lights that are triggered during the second exposure by interpreting the electrical and biofeedback signals from the sensor boxes on which you place your hands.

What to Expect During an AuraCam Photography Session

While the AuraCam is extremely expensive, it is commonly used for capturing aura pictures at public events such as psychic fairs. If you have your photograph taken by an AuraCam, you can expect the following:

For those who find the AuraCam prohibitively expensive, there's also a computer-age version popular with energy healers and home users. You may find these being used in public at events such as metaphysical fairs and paranormal conferences as well. Developed by Guy Coggins, WinAura makes aura photography accessible to the masses through computer software, a bio-electrical feedback sensor, and a web cam. It uses the same type of technology as the AuraCam, and a computer algorithm uses data from the sensor to superimpose computer-generated colors over a portrait photograph.

What to Expect During a WinAura Photography Session

If you use WinAura for yourself, you'll need a Windows-compatible computer, the software, and a web cam. Your photography session will display the image and real-time data detailing what the sensors interpret about your aura. If you have the session at an energy practitioner's office or somewhere in public such as a metaphysical fair, you'll likely experience the following:

The AuraCloud 3D is a direct competitor of WinCloud and is marketed to wellness centers, energy healers, and people who wish to go to fairs and public events to offer representations of the aura in photos. As with the other aura photography products, it doesn't capture an actual image of your aura. Rather, it reads the bioelectrical data, translates it via software algorithm, and then provides a computer-generated representation of your aura colors by superimposing them on a photograph and real-time onscreen 3-D rendering of your entire body. The equipment is similar to WinAura, requiring the software, a HD webcam (which is bundled with the software), a sensor that looks like a large mouse but reads bioelectrical information from your hand (bundled), and a Windows computer (not bundled). It comes in both Pro and Basic versions with the difference being the functionality of the software.

What to Expect From an AuraCloud 3D Session

Your AuraCloud 3D session is similar what would happen with WinAura. Along with basic aura information, it may supply additional data as well. What you receive from your session includes:

No Camera Captures Photographs of Your Actual Aura

To date, there is no technology to capture true aura portraits. Instead, all aura images are simulated by taking sensory readings and using various methods to translate that data into color clouds superimposed over your photograph. Kirlian photography comes the closest, creating the coronas by measuring energy and water content in the object being photographed. Additionally, there are other aura photography products that may measure other data, such as emitted heat with use of a thermal camera. All of these products offer a representation of your aura that is a best guess based on the data collected through sensors.

Your Aura Photos May Change Over Time

Because aura photos use translated data such as biofeedback, you can have aura photographs taken a few hours apart that will look completely different from one another. This is because unless conditions are exactly the same from one photo to the next, your biofeedback and electromagnetic output may be slightly or significantly different based on mood, hydration, stress levels, and other factors.

Visualizing the Human Aura With Photography

Aura photography is in its relative infancy, and it's changed significantly since the turn of the last century when people began experimenting with electrography to capture auras. Since then, it's come into the computer age, making it possible for even home users to imagine how their aura looks.

1
Comments
© 2006-2020 LoveToKnow, Corp., except where otherwise noted. All Rights Reserved.
Resources, Advice & Tips for Covid-19
Read More
What to Expect From Aura Photography