When asked to define black magic, many people suggest all magic is black magic, but this isn't true. As its name implies, black magic is used for much darker reasons, often expressly for the purpose of causing harm.

What is black magic? What black magic and white magic are, are two sides of the same coin. Magic is used in many religious traditions as an attempt to influence the physical world via supernatural means.

Magic may be achieved via many methods including:

While white magic seeks to influence the physical world in positive ways, black magic intends to do so negatively.

Black magic may have many applications, such as:

A number of spiritual, religious and mystical traditions utilize magic as part of their practices. Individual practitioners of magic may draw from multiple traditions, such as black magic when practicing their craft.

Wicca is a pagan witchcraft religion. While practitioners do engage in magical practices, Wiccan laws strongly discourage the use of Black Magic. For example, the Wiccan Rede, which is the guiding principle of Wicca, states, "An it harm none, do what ye will." Though the language is archaic, the meaning strongly discourages Wiccans from doing harm to others. Likewise, the Wiccan Rule of Three suggests that what one does is returned to him or her threefold. Therefore, if harm is intended through Black Magic, the practitioner will receive three times the harm in return.

In spite of this, a few Wiccan practitioners may practice Black Magic, although these practitioners are the exception rather than the rule. This magic is primarily accomplished through spells, potions, and incantations. 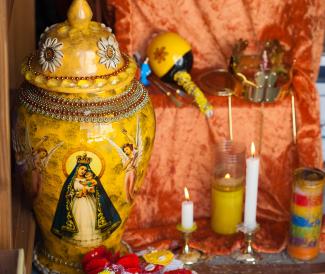 Santería is an Old World religion originating in the Caribbean and West Africa. The religion has magical practices but also follows some of the beliefs of Roman Catholicism. With its Catholic roots, Santería practitioners believe in the Golden Rule, "Do unto others as you would have done unto you." (Luke 6:31) However, practitioners can return what has been given to them in Santería, so if someone harms them it is considered acceptable to return the harm via black magic without expecting further harm.

The form of Voodoo practiced in the United States is called Louisiana Voodoo or New Orleans Voodoo. It is also closely related to, but not the same as, Hoodoo, Vodou, and Vodun. All include folk magic practices. While many of Voodoo's magical practices involve white magic such as healing and love potions, some practitioners engage in black magic directed at causing harm to others. For example, many people are familiar with the practice of placing pins in Voodoo dolls to bring harm to another. Potions, herbs, and spells may also be used.

Many people are surprised to learn that not all Satanism is about Devil worship. In some forms, it is a philosophical movement focused on hedonistic and humanistic pursuits. However, some followers believe that worshiping Satan will bring them great power on the earthly plain. They may attempt to summon Satan or demons via black magic rituals, incantations, and ceremonies.

The signs of a black magic spell attack are very similar to the symptoms of a psychic attack. Both types of attacks are personal and often designed to cause confusion, unfound fears, reverse in fortune and various outside forces that attempt to affect your life. This type of spell attack can also have physical effects, such as depression, weakness, headaches, sickness or other physical symptoms. If you're a sensitive, you may feel the presence of the spellworker and the negative energy being sent to you. There are several ways you can counter and break this type of evil, intrusive and immoral attack.

How to Break Black Magic Spells

There are several methods you can use to break a curse/hex/spell. Choose one and use it with the belief it will break the spell. 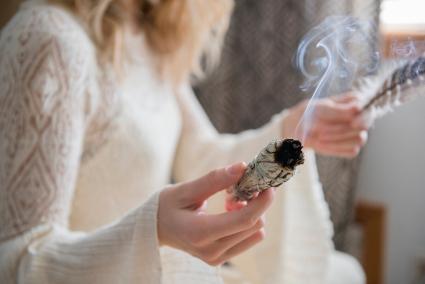 The easiest way to break a spell is to burn uncrossing incense. You can purchase self-igniting incense or create a bundle of herbs that include, wormwood, vetiver and mugwort to burn. While the incense burns, you can pray, chant or simply focus on releasing yourself from the evil spell. Be sure to burn the herbs completely to ensure the spell's power is broken. Once broken, you want to ensure the curse cannot be placed on you again. Carry a small bundle of these herbs with you, such as purse, pocket or inside a locket or charm.

Another way to break a spell is to cleanse your aura and destroy negative energies attached to you by taking a sea salt bath. You'll need to add the sea salt to a warm bath and immerse yourself. Use a cup to anoint your head with the sea salt water or submerge your body beneath the waters. Once you feel as though the salt has cleansed the spell from you, shower to completely remove the salt water from you. Fill the tub with clean warm water and infuse it with holy basil, wormwood and any other herbs you prefer for protection. Once finished, drain tub and towel dry.

You can also wear protective symbols, especially one representative of your religion or belief system. You can further counter the negative energy assaulting you through meditation, creative visualization and prayer. Never underestimate the power these practices to generate protection and to break a black magic spell.

If you aren't able to break the spell yourself, it may be time to seek a black magic expert. This person should have a positive reputation and proven experience in breaking black magic spells. You will need to follow this experts advise and directions to break very powerful black magic spells.

While some people do practice black magic, others practitioners prefer to use magic with care. The intent of the spell, hex, or other ritual is always in the hands of the one casting it, and only he or she can decide if it is being cast to do good or harm.

5
Comments
© 2006-2021 LoveToKnow, Corp., except where otherwise noted. All Rights Reserved.
Resources, Advice & Tips for Covid-19
Read More
Black Magic: How to Recognize It and Break It