Mental telepathy is believed to be a form of extra sensory perception (ESP) ability that allows a person to have direct mental communication with another person. There are two paths to understanding the mental telepathy meaning. The first is through psychical examination as a paranormal event and the second is through clinical exploration of the phenomena as a scientific experiment.

Mental telepathy has been relegated to the mysterious category of paranormal phenomena. Experts define mental telepathy as a psychic ability similar to clairvoyance and ESP.

Psychic Library defines telepathy as a form of ESP that is direct communication between living beings. This is achieved without any form of writing or oral communication or the commonly used five senses. The use of telepathy isn't just a human sixth sense but is believed to exist in other life forms such as animals.

During the 19th century, a number of experiments were conducted on those claiming to have telepathic and other psychic abilities. Most were proven to be frauds while other claims weren't able to be duplicated per scientific principles used to authenticate them.

One of the most famous 19th-century cases of telepathy was the experiment of the Creery sisters. In 1881, The Society for Psychical Research tested the sisters and determined they were the real thing, possessing true psychic powers, especially telepathy.

The Creery sisters were tested by using eight different subjects and supposedly were successful. However, years later, seven of the subjects admitted they'd cheated. In 1888, the sisters were caught using signal codes and confessed to having committed fraud. The sisters eventually admitted that with the help of their servant they had used secret signals to fool the investigators.

Frederic William Henry Myers (1843-1901) helped found the Society for Psychical Research (SPR). He is credited with theorizing that telepathy is a basic law of life. Prior to Myers coining the word "telepathy," it was known as "thought transference."

Myers believed that distant thoughts and scenes perceived without the five senses were perhaps a mental extension of an individual or that of another upon the clairvoyant. The society was interested in communication between "living minds."

One of the first telepathy experiments SPR conducted was in the form of the then-popular parlor game, "The Willing Game." It required one person to leave the room and those remaining to decide on a task they would mentally convey to the person when he or she returns. If the person succeeded in completing the task, they were the winner of the game.

Mark Twain claimed to have telepathic communications on a regular basis.

In his autobiography, Twain reported that he had a lifetime of telepathic communications that first started as "crossed letters and premonitions." He would suddenly think about someone he'd not seen for years and write the person a letter only to receive a letter from that person written on or before the day he penned his own letter.

Another instance was a book he thought a dear friend he'd not communicated with in over a decade should write. Twain penned a letter to his friend about the idea but didn't mail it, thinking he'd pitch the idea to an editor at a later date. A week later, Twain received a letter from that friend, written the very day and hour Twain had written his letter. The friend wrote to Twain suggesting the exact book idea for Twain to write.

According to Princeton University, telepathy is "the transfer of information on thoughts or feelings between individuals by means other than the five classic senses." The various clinical attempts to test the proof of telepathy have been recorded with very different results from the above claims of telepathy.

Perhaps the first recorded scientific approach to understanding telepathy was undertaken by the Greek philosopher Aristotle (384 - 322 BC). While writing about dreams and how some people might have the same dream, Aristotle wrote that perhaps it was a matter of telepathy. He hypothesized that telepathy transmissions were comparable to a stone being thrown into still water and the ripples radiating from the splash.

Aristotle questioned whether thoughts had similar waves that moved through the air and affected dreams. Although these mental waves were also present during the day, he believed that the tranquility of nighttime combined with the person being in a restive sleep meant the human mind was more receptive to these mental motions.

German physicist Heinrich Rudolf Hertz discovered "invisible waves" that he noticed were generated by electromagnetic interaction. Italian engineer Guglielmo Marconi was fascinated by this discovery and in 1895, through experimentation, received his first radio signal. 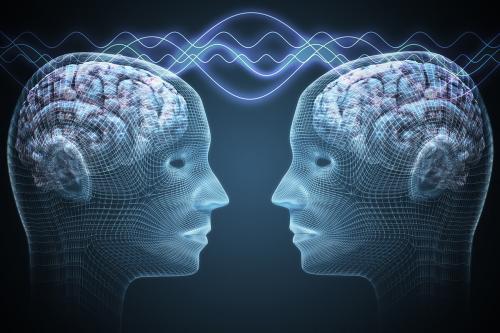 1895 also saw the discovery of what would become x-rays. British scientist Sir William Crookes' psychical research was inspired by these discoveries, and he hypothesized that the rays could be a mode of transmission for intelligence. He theorized that a part of the brain might serve as a receiver for the rays, similarly to how vocal chords manipulate sound vibrations and send them out into the air.

In February 2013, Duke University announced that its neuroscientists had invented an implant that allowed rats and possibly monkeys to communicate telepathically at great distances. The experiments consisted of one rat pushing a specific lever to release a food pellet while a different rat in another room received the telepathic communication and pushed the same lever.

The connection between the two rats was achieved via electrodes implanted in their brains. The success rate was 70%, which represented more than a statistical coincidence. The researchers expanded the experiment with one rat in North Carolina and one in Brazil. The rats responded similarly.

Srini Pillay MD writing for Psychology Today discusses new research that indicates mental telepathy is possible. There are several factors that may contribute to this ability. These include:

Can Telepathy Be Learned?

Many people believe that mental telepathy is just another sense that is latent in most people, but like any other form of exercise for an existing muscle or talent, it can be strengthened. Others believe that telepathy can be taught.

How to Train Telepathic Ability

You can try to learn or exercise your telepathic ability with this simple method. It requires two people, one to send the thought and another to receive it. You and the person conducting the experiment should both keep journals of your process. Set a time, note climatic conditions and any other possible influencing factors in the environment.

Go to a quiet place and focus on the message you wish to send. Keep it simple in the beginning by concentrating on a single word. Set a time limit and then check with your friend at the end of that time to see if you were successful. It may take several tries before you have any results. Once you've made progress with this method, you can try some more advanced methods.

Telepathic Abilities and the Future

As science makes advancements, such as Duke University's success with electrodes in rats, telepathy between humans may be possible in the future. It could usher in a new method for humans to communicate with each other.

2
Comments
© 2006-2020 LoveToKnow, Corp., except where otherwise noted. All Rights Reserved.
Resources, Advice & Tips for Covid-19
Read More
Mental Telepathy: What Is it and Can You Have It?