Santeria is a prominent religion found in Cuba, Puerto Rico and the Dominican Republic. According to the Encyclopedia Britannica, African slaves brought from the Yorùbán region to Cuba also brought their religious practices much the same way slaves brought Voodoo to Haiti. And, like Voodoo, the Yorùbán religious beliefs evolved through the blending of Roman Catholicism into modern day Santeria.

Santeria also took religious aspects from various practices in West Africa and the Caribbean as well as a few Native American spiritual ideals. The blending of these practices created a unique, oral tradition-based religion.

At the core of Santeria is the Yorùbá religion. Anthropologists believe that the Yorùbá migrated from various Middle Eastern regions including Egypt and Assyria. The Yorùbá religion embraces a form of trance divination used to communicate with the spirit world. Many of these practices seem similar to Voodoo, such as inviting spirits to possess ritual participants so they can communicate with the divine.

As with most slave religions, the Yorùbá religion was supplanted with that of their owners. Even though the slaves were forced to be baptized and converted to Catholicism, they retained their heritage through their religious practices.

The slaves meshed their religion with Catholicism much the same way slaves in Haiti did with Voodoo. The transformation of the original religion can be seen in how the Yorùbá deities (Orichás) were blended with the Catholic saints.

Not all initiates are on the path to becoming a priest or priestess, but all initiates have a godparent to sponsor and help them learn. While there are no churches in the Santeria religion, there are Ilés (house temples or houses of saints).

The Ilé and Home Shrine

The Ilé is typically the home of either the priest (Santero) or priestess (Santera) or a rented building. A part of the home is dedicated to a shrine honoring one or more Orichás and an altar (igbodu). In his book, Santeria: African Spirits in America, Joseph M. Murphy describes the Ilé as a "complex hierarchy of initiates grouped into families of godchildren." The Ilé is often used to describe this extended family of a community.

After going through a cleansing initiation followed by four major initiations, the priest or priestess spends the following year wearing only white and avoiding contact with any non-initiated. At the end of the year, a ceremony is held, and the initiate is granted the right to perform initiations and cleansings, hold consultations and administer remedies to the sick and afflicted.

Some priests will become diviners using cowrie-shell divination but rarely is a priestess allowed this right. Priests and Priestesses serve as the Orichás representatives and are treated with great reverence and honor as a divine conduit.

Music, drumming, chanting, dancing, praying and eating are all part of Santeria ceremonies and rituals. The drums are considered sacred and only men can play them. The dancers show their respect by never turning their backs to the drummers. 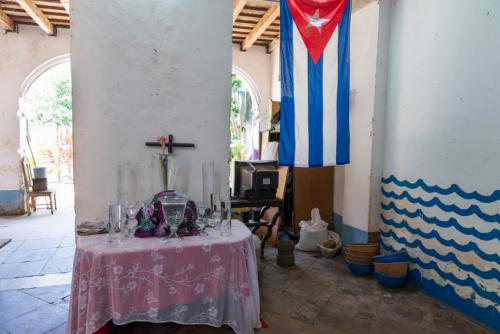 Some ritual dances are performed by covering the body in white powder made from eggshells (cascarilla) and drawing spiritual symbols with it. The purpose of rituals is to assist the performer in connecting with the Orichás. The ultimate goal of these practices is to reconnect with the divine, Olodumare (God).

As in Voodoo, the spirits often possess those participating in ceremonies and rituals. Similar terminology is used such as the spirit "mounting or riding" the person like one would a horse. The spirit then moves through the person in dance and takes part in the eating of the sacrificed animal that has been cooked and prepared for the celebration.

It's important to note that many of the Santeria practices are ritual reminders to the practitioners of their history as slaves from Africa. There are very complex and specific rituals for afflictions by spirits, such as an intrusive spirit that attaches itself to a person or is conjured and sent to create havoc in a person's life or relationship. The afflicted consults and works with a priest or priestess to not just resolve his issue, but also the spiritual issue binding the troubled spirit. The priest or priestess assists in first ascertaining if there is a struggle with a spirit, known as a spiritual twisting (trastornos). Depending on the type of twisting, the priest or priestess will help the person by not just evicting the assaulting spirit, but also treating the possession as a call for healing.

A healer helps individuals suffering from spiritual issues that manifest into physical illnesses. This requires the healer to connect with the divine then interpret what is going on with the sick person. Spirits are often blamed for bad luck as well as illnesses.

Since the Santeria belief system is based on the theory that all life comes from a primal life force known as the aché or growth, the aché is very central. According to Cynthia Duncan, Ph.D. and initiated priestess, the aché exists in everything and is too complex to comprehend fully. It drives the individual to evolve by balancing the heart, mind, and body with spirit.

Practitioners Use the Aché

Through this guidance, practitioners find their paths and purposes in life. The priest or priestess taps into this energy for a wide range of uses. For example, the priest or priestess can use the aché to connect and communicate with spirits to facilitate healings, divinations or counsellings.

The sacrifice of animals plays a vital role in Santeria. Chickens are the most commonly used animal, though other fowl, as well as goats, sheep and other animals, can be used. The ritual sacrifice of animals has to be performed in a very precise and specific way of cutting the collar area.

This process represents the cutting away of the nooses tied around slaves' neck as they were hung. The ritual cutting is done to protect against such a fate. According to an interview with a Santeria priest published in Cultural Anthropology, the crux of being a priest is to become "Lucumi" (enslaved Yorùbá ) as a way to recall heritage and achieve greater self-knowledge.

The animal sacrifices are performed to bless various life events, such as a marriage, death, birth, and healing. After the ritual, the animal is cooked and eaten, except when it is sacrificed for a death or healing rite. In those instances, the death or sickness is passed on to the animal. The spirits feed on the animal's blood. Those participating in the ritual share the animal with the Orichá by eating it.

Santeria practitioners embrace that they share the world and the space around them with spirits, and these spirits can even be on their bodies. They connect and communicate with these spirits during rituals and moments of spiritual possession and trance.

Santeria Practices in the United States

The Christian Research Institute states that Santeria has been growing rapidly throughout the US along with the ever-increasing Hispanic influx. According to Religious Tolerance, the number of Santeria practitioners in the US ranges from 800,000 to 5 million. In a 2014 Houston Chronicle article citing a 2004 survey, it was estimated 22,000 Santeria practitioners lived in the US. In 2014, Faizah Perry, leader of her local Santeria church, told the Chronicle she believed there were thousands of practitioners in Houston and the religion was spreading via the Internet. Perry compared her religion to that of a charismatic church, especially when spirit possession took place during the rituals. The practice of animal sacrifices isn't discussed within these publications; however, traditionally goats and chickens are used as sacrificial animals.

DOJ and Santeria in Prisons

In a 1992 paper published in the US Department of Justice's Federal Bureau of Prisons Journal, the 1980 Cuba Freedom Flotilla is discussed. The article states that of the 125,000 Cubans who arrived in the US, a small portion (350) were discovered to have criminal records and were placed in federal prisons. Over time, 7,600 of the initial group ended up in prison, mostly for parole violations. Many of the Cuban Freedom Flotilla practiced Santeria and a hybrid form evolved within the prison systems due to the lack of proper food and items necessary for religious rituals.

Are Santeria and Voodoo the Same?

The answer is no. While the two religions share many similarities, they are not the same religion. Both originated in West Africa but morphed into the present day religions imported from non-African countries.

Understanding Santeria and Its Practices

Santeria is a multi-layered religion steeped in ancient traditions mingled with other religions. Those who practice Santeria move through life alongside spirits and participate in healings and a vast cache of rituals steeped in both the supernatural and the energies of the physical world.