Not every psychic has visions where they actually see something, although it is a term commonly used for any type of information a psychic receives whether it involves sight or receiving information through other channels. Psychic information can come through any of the five senses or through the emotions (empathy) or even just by receiving "downloads" of information and suddenly knowing a story. All of these are forms of extrasensory perception (ESP) which opens the psychic to the information he or she is receiving.

Visions may come in snippets of videos, or they may be flashes of pictures or slideshows that appear in my mind's eye. For example, when playing the piano, I see flashes like a quick slideshow of other places where my antique piano has been. I can see the rooms it sat in, a man playing it, a fireplace, and other images like a slideshow. The images are fleeting but clear; they look just like I'm seeing a photo although unlike a memory or image, there tends to be a faint haze or a blur around the edge, and the images often flash by very quickly.

Additionally, sometimes the "visions" appear as downloads of knowledge, where one moment I'm thinking normal thoughts and suddenly, I know a whole story complete with details. This is a type of psychic ability known as claircognizance, or clear understanding.

I also receive information through physical sensations and emotions. For instance, in a room where a woman died of a sudden brain aneurysm, I felt severe pain in my head, the room spun four times, and then everything went black. This happened several times as I walked throughout the room. In another example, aboard a naval ship now docked as a floating museum, I felt burning pain in my chest and terror followed by deep sadness in a spot where a gun turret explosion had killed several sailors. I also smelled smoke and gunpowder.

Frequently, visions are accompanied by sensory information, such as an aroma or a sound. For example, I often smell ozone when a spirit is present, or I may notice a scent or taste strongly associated with a memory, such as a certain perfume, the smell of cigar smoke, or the taste of a particular food. Likewise, sometimes I hear snippets of songs or other sounds, such as crying or laughter. I've also felt hands stroking my skin, light touches, and sometimes firm taps.

Psychic advisor Seth Michael is a well-known psychic medium who works in the Camas/Vancouver, WA and Portland, OR metropolitan area. Seth frequently offers public gallery readings and works full-time with clients from his office in Camas.

Movies in His Mind

According to Seth, "How visions come to me come is slightly different depending on the memory of the spirit; however, typically it's a flash of an image, or it may play out like a movie."

For example, Seth notes, "If their memory of a house or room is solid, I would typically see more details such as vivid colors or layout. If not, there may be some details left out or the image or it may be more difficult to make out." Seth also notes sometimes in his visions he will see a feature accented in order to communicate important information. For example, "If they had a bigger nose than most, they may show me a significantly larger nose so I am sure to make mention of it." 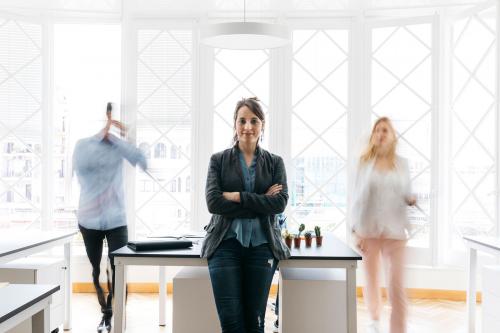 Seth's visions also extend to potential future events. If he's seeing a future event, it often plays out with an emotion or feeling attached so Seth has a better idea of how a particular outcome may feel. He says, "In these types of visions, they may roll more like a film or could just be a still picture of a particular event yet to come. These types of visions are usually solid and easy to make out."

Difference Between Imagination and Visions

As to how he can tell the difference between his own thoughts or imagination and his visions, Seth notes, "Overall most visions of any kind have a particular difference in I notice my brain isn't creating them like imagination. They don't have a feel like a memory would, it's more like seeing it for the first time."

Sharon Lewis, who goes by AuroA, is a psychic medium working in the greater Portland, OR metropolitan region. She feels giving a reading is a great honor, and a client's trust is not to be taken lightly.

During sessions, some of AuroA's visions come as visual imagery. She notes, "[It] is often scenes like in a movie with movement, and change of scenery, or in stills. Often they are in color but sometimes in black and white." She also says the visions take her out of time and space, seeing them "for mere moments" as everything else is gone but what she is seeing. She describes it is like toggling back and forth between psychic sense and the present moment. Often, the images come in a flash. According to AuroA, it's like "a scene just suddenly appearing out of the blue with no reason at the time."

What a Psychic Sees

What psychics "see" can vary widely. Some psychics see things symbolically and have come to understand the language of their visions and are able to interpret them clearly. Others may see movies or images, hear sounds like music and voices, feel emotions, or even smell or taste things significant to the reading. Experienced psychics weave this information together in order to get a clear vision of what is being communicated so they can pass it on to the person receiving the reading.

3
Comments
© 2006-2020 LoveToKnow, Corp., except where otherwise noted. All Rights Reserved.
Resources, Advice & Tips for Covid-19
Read More
What Does a Psychic Vision Look Like?