Stories about real poltergeists, or noisy ghosts, are quite different from Hollywood makes them out to be in movies like Poltergeist. While the paranormal activity may be caused by either spirits or living agents, true poltergeist stories are rare but fascinating looks into the phenomenon.

As a paranormal investigator, I am often asked to consult on cases with unusual activity, but sometimes I encounter it in the places where I live and work, as well. I spent many years as a volunteer at the Lewis County Historical Museum in Chehalis, Washington. It has a haunted reputation, and I even wrote a book about the activity there. I also spent time as part of a paranormal research team investigating the happenings at the museum. While a lot of the activity came in the form of disembodied voices, electronic voice phenomena, and seeing shadowy figures, the museum also had its share of poltergeist activity.

The historical society in Lewis County uses the attic of the museum as a storage space for items not on display. While in the attic, I've personally experienced several objects moving on their own. The first is a chair. Many times I walked down an aisle in the attic, turned a corner, and then came back and walked down the same aisle again. More than once on that return trip down the same aisle, there was a chair that wasn't there on the first trip blocking the aisle on my second trip through.

Objects Thrown in the Attic

Two separate times as I led ghost tours through museum, my group and I experienced objects thrown in the attic. The first was a book. While leading a tour group, there was a loud bang, and a book landed at my feet. The books were kept on the other side of the attic. Even more interesting, the title of the book thrown was Natural Law in the Spiritual World. The second time, I was leading a tour group when something landed at my feet and skittered. It was a pencil. Others have reported similar experiences in the attic.

The Pen and the Hearse

Another time, the museum had a horse-drawn hearse from a local funeral home on display during the Halloween season. The museum's director noted paranormal activity seemed to have increased since the hearse arrived at the museum so a group of us investigated after hours. We were sitting in the museum's main gallery near the hearse looking down the length of the building and quietly chatting. Things were quiet for quite a long time when suddenly there was a loud bang. It was so loud, I thought someone had driven by outside and shot out one of the windows along the street. We immediately began to investigate, and I discovered the pen that had been previously sitting at the front desk was now lying 20 yards away on the floor. It appeared the pen had been thrown with such force it made a loud bang when it hit a display case and then skittered along the floor. 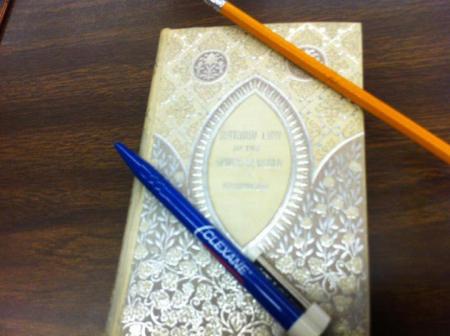 Items thrown at the museum

One of the most famous real-life poltergeist cases is the Enfield Poltergeist, a case that occurred in Brimsdown, Enfield, England. It has been the subject of several television shows and movies, the most recent of which was The Conjuring 2. One of the most respected parapsychological organizations in the world, the Society for Psychical Research (SPR), investigated the claims in the case, and it also attracted the attention of American investigators Ed and Lorraine Warren.

Claims in the Case

A family of five, a mother and four children, rented the home on Green Street in Enfield in the late 1970s. At first, activity was frightening but not over the top and included knocking on the walls and beds being jostled during the night. Then, two of the children also reported furniture moving by itself, something police investigating the claims saw, as well. As the activity ramped up, heavier pieces of furniture moved and were pushed down the stairs, objects were thrown by an unseen hand through the air, and witnesses saw two of the daughters levitating. The daughters also spoke in men's voices offering disturbing messages, and toys that had been thrown across the room felt hot to the touch.

Hoax, Real, or Both?

Investigators did discover evidence of family members faking some activity. However, one of the main investigators from the SPR, Guy Lyon Playfair, believed that while some of the activity was likely faked, other activity appeared to be genuine and generated by supernatural causes. Other skeptics argue that if some activity was faked, it was likely all was. The case remains controversial, with both sides still debating its merits four decades later.

In the United States, one of the more well-known cases of a poltergeist haunting occurred in San Pedro, California. It is commonly referred to as either the San Pedro Poltergeist or the Haunting of Jackie Hernandez. The haunting occurred back in 1989 and 1990, and it was connected directly to a single person as opposed to a location. Hernandez was recently separated from her husband and had moved into a new rental home with her two children. Seeing a scary entity in her children's room, Hernandez contacted parapsychologist Dr. Bary Taff, who brought a team to investigate. I interviewed Dr. Taff about the San Pedro case in an episode of Paranormal Underground Radio (starts at 26:19).

What Happened in San Pedro

Hernandez contacted investigators Dr. Barry Taff and his associates, Barry Conrad and Jeff Wheatcraft, after seeing an entity in her children's bedroom. The first thing the investigative team noticed on entering the house was a foul smell. The team observed a number of poltergeist-type of activities including objects being thrown and hearing loud bangs and knocks from the attic space above. Wheatcraft went into the attic to investigate the activity and while he was there, a cord mysteriously wrapped itself around his neck, nearly strangling him. Conrad shot a video of the San Pedro poltergeist, including the attempted strangulation of Wheatcraft. The activity is extensively documented in Barry Conrad's book, An Unknown Encounter, in a documentary of the same name, and in Taff's book Aliens Above, Ghosts Below.

According to Dr. Taff in his interview with Paranormal Underground Radio, the San Pedro poltergeist is an example of a case where the poltergeist activity is caused by a living agent who is unaware he or she is the source of the activity. After researching the case extensively as it occurred, Taff concluded Jackie Hernandez, who was experiencing a period of intense psychological distress, was the cause of the activity. Taff points out that the disturbing poltergeist activity was most commonly directed towards one of the investigators on the case, Jeff Wheatcraft, whom Hernandez disliked.

While real poltergeist cases are rare, they do exist. Many are extensively documented and include disturbing events that are either attributed to spirits or to living agents. This has caused investigators to conclude the poltergeist phenomenon is real in spite of some cases where it is evidence hoaxing is present.