The demon of Black Star Canyon is said to haunt the popular 2.5 mile hiking/biking trail located in Orange County, California. The stretch of the trail is also reported to have strange and terrifying paranormal activity for anyone unlucky enough to cross paths with any of these spectral entities.

Visitors to the canyon report the sensation of feeling as though they are being watched. There are some specific claims to seeing what's commonly called the Black Star Canyon Demon. The demon is said to lurk in the shadows, often frightening unsuspecting hikers and bikers as it crosses the path several yards in front of them. The demon appears as a dark humanoid shape roaming about the mountainside.

Other ghostly canyon dwellers reported to haunt the area include:

Haunted History of Black Star Canyon and Its Demon

The history of Black Star Canyon is said to be one of bloodshed. This remote canyon is located in the Santa Ana Mountains in Orange County, California. It's a popular hiking and biking trail, but it also has a dark and bloody past. Many people believe reported 1831 massacre of the Gabrielino-Tongva tribe in the canyon spawned a demon.

As an archaeological site, artifacts recovered from the canyon tell the story of a Tongva summer retreat from the unrelenting heat. The abundance of oak trees provided the Native Americans the mainstay of their diet - acorns. Archaeologists believe the tribe lived elsewhere during the winter months.

JE Pleasants' account of horses stolen by the Tongva being tracked down by hired fur trappers is an accepted retelling of the 1831 massacre. According to OC Weekly, no archeological evidence has ever been recovered from the site to substantiate the story. However, the paranormal phenomena of the Black Star Canyon Demon seems to revolve around this incident.

Cast of Ghostly Characters and Incidents

There are several stories about deaths and murders in the canyon. It's difficult to sift through myth and truth, but when it comes to the ghost stories, there are plenty of ghostly characters to psyche you out before you venture into the canyon.

According to Patch, there have been many deadly wrecks on the canyon roads around midnight. In addition, there are claims of missing hikers still in the canyon after midnight.

There are also tales of the restless ghosts of coal miners from the now defunct coal mine located in the canyon. Witnesses claim to see the apparitions of coal miners near and around the closed mine.

Another ghost story associated with the canyon has ancient Mexican roots. The tale is about a mother, known as La Llorona who murdered her children and then committed suicide. Her ghost has been reported as wandering the canyon in a flowing white gown crying and wailing as she searches for her children.

One story places James Gregg, a man shot and killed by two brothers who owned a ranch in the canyon, Hidden Ranch. Thomas Hungerford and his brother Thomas settle the disagreement when they shot and killed Gregg. Another version states the argument was over a horse trade gone wrong. Whatever the cause of the disagreement, many wonder if Gregg's ghost is wandering about seeking revenge.

Terra Umbra - Empire of Shadows explains some of the newer tales of the Black Star Canyon Demon and other paranormal stories may have been inspired by an eyewitness account in the book, Weird California. The story tells of a group that stopped their car in front of the gated entrance and witnessed spectral dwarf shadows in hoods marching toward them. This story spawned an Internet sensation and the story morphed into a all manner of ghostly tales.

Tale Beyond the Trail

Reddit poster, galumph_triumph, gives a personal account of a haunted house located in the Black Star Canyon. He spent the night with a buddy to help babysit the friend's toddler brother while their parents went out for the night.

Some of encounters he claims they experienced included an apparition taking on the form of his friend's mother, the mother's voice on the house intercom system long after his parents' car had driven out of the driveway, and other strange sounds coming from the house intercom. A ghostly woman was reported peeping into a neighbor's windows and a woman's voice broadcasting over the intercom system from inside the house asking to be let into the house.

OC Ghosts and Legends offers a ghost walk along the Black Star Canyon Trail at night. The tour company states they and their tour guests have experienced strange ghostly phenomena and share these personal stories with their tour guests. Some these include EVPs captured during their investigative tours. 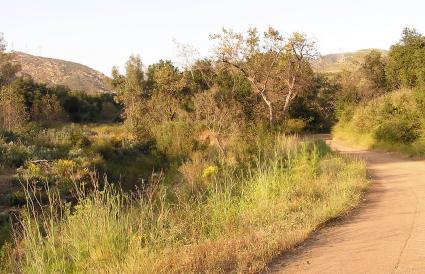 The story of a demon that haunts Black Star Canyon is just one of many other ghostly encounters reported over the years. Many visitors claim to have a sense of a malevolent presence lurking in the canyon.