There is a cornucopia of haunted places in Connecticut. Many of these sites were homes and resting places for American Revolutionary War heroes and heroines. Apparently, some still hang around keeping an ever-watchful eye.

The museum is open Mon through Sunday from 1 pm to 4 pm. Admission is $5 to $8 and free for museum members and children ages 5 and younger. It's closed on major holidays. You can participate in a self-guided tour using a museum tablet and a docent-guided tour (subject to availability). The house is located at 227 S Main St in West Hartford. If you wish to contact the museum to inquire about a paranormal investigation, call 860-521-5362, complete an online form with your request or email comments@noahwebsterhouse.org.

American Revolutionary War Patriot, Captain Nathan Hale, was captured and hanged as a spy by the British army in September 1776. The 21-year-old's words still ring out in their historic sentiment, "I only regret that I have but one life to lose for my country." His family homestead is part of the Connecticut Landmarks' 11 historic properties.

According to Ghosts of New England, there are several ghosts that are permanent residents at the homestead.

If you wish to contact the museum about a possible paranormal investigation, call (860) 742-6917 or complete an online form.

The downtown 16-acre New Haven Green park looks lush and green. Visitors would never suspect that underneath the grass are an estimated 5,000 to 10,000 unmarked graves. Two yellow fever epidemics in 1794 and 1795 claimed thousands of lives.

The acreage served as the local cemetery for 150 years. In 1821, the headstones were moved to the new town cemetery, Grove Street Cemetery. However, the bodies were left undisturbed in their old graves. Proof of this was seen in 2012 when a large oak tree was upturned by Hurricane Sandy and a human skeleton was unearthed trapped among the roots and clumps of dirt.

Ghosts on the Green

It's no wonder so many stories exist about the many ghosts seen on the green.

You can visit New Haven Green park at 250 Temple Street in New Haven. Even though it is a privately owned park, it is open to the public. If you wish to conduct a paranormal investigation, you can call (203)946-8027, contact the New Haven Department of Parks, Recreation and Trees for permits and information on filming guidelines. 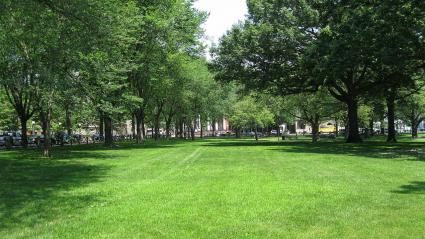 The Sterling Opera House was the first Connecticut building to be listed with the National Register of Historic Places. The last performance was in 1945. The building lower levels housed the police station, jail, and city hall until the 1960s when the city abandoned the building. Renovation has been underway for several years. In 2011, the television show Ghost Hunters filmed an investigation at the opera house. Some paranormal activity includes:

The opera house is located at 104 Elizabeth Street in Derby. You need specific permission from the town to enter the premises since it is not open to the public at this time; however, you can call (203) 736-1450, complete an online form or contact the Board of Aldermen to inquire if a paranormal investigation is possible. If the site is still not deemed safe, you can walk by and see if you can get a sense of the paranormal activity there from the street.

The Gallows Lane is located in the village Quaker Hill in the township of Waterford in New London County. Legend states witches were burned on this road, but there are no existing records to verify this. People have reported a few strange paranormal encounters.

You can choose a cemetery, museum home, colleges/universities, or an open area like a park or road to conduct an investigation. The numerous places in Connecticut make it an ideal place for ghost hunters.