In Wisconsin, haunted places filled with paranormal activity include some very malevolent entities terrorizing home and business owners. Phantom men and women wander Wisconsin highways, cemeteries and private homes. No place seems safe from sinister ghosts when they wish to make their presence known at these haunted areas in Wisconsin.

The Journal Sentinel lists Summerwind Mansion (also known as Lamont Mansion) as Wisconsin's most haunted place. The mansion was originally a fishing lodge, built in the early 1900s. At one time, it was owned by US Secretary of Commerce Robert Patterson Lamont who served during the Herbert Hoover administration.

According to an episode of Discovery Channel's A Haunting, the Lamonts dismissed the ghost stories their servants told until they began to experience strange phenomena. The couple was having dessert in the kitchen when the basement door flew open and a dark apparition emerged. Lamont grabbed a pistol from a kitchen drawer and shot twice at the entity that quickly slammed the door behind it.

Numerous people have since owned the mansion, but the most significant story came in the 1970s when the Hinshaw family of six moved in. The family remained in the home for a torturous six months. Their experience was featured on A Haunting and included paranormal events such as:

The husband, Arnold, suffered a nervous breakdown and his wife Ginger is often reported as having attempted suicide. One of her daughters asks what would drive a child to consider suicide, implying she'd contemplated it as a way out of her situation.

One night in 1988, the mansion was struck several times by lightning that set the mansion on fire, leaving only the chimneys, rock foundation and basement. Over the years, paranormal investigators have reported strange phenomena including:

Closed to the Public

The mansion no longer stands, but it was located on West Bay Lake. The location is closed to the public, though occasional tours, camp outs and other events are available at the ruins through the Summerwind Restoration Society.

Most Haunted Bed and Breakfast - Brumder Mansion B&B in Milwaukee

The Brumder Mansion is now operated as a B&B but according to Haunted Houses, it has a haunted past and present. The four-storied 8,000 square foot mansion has a long history starting with the original owner George Brumder Sr., known as a business leader of a German language publishing company.

The mansion was sold to brothers Sam and Ed Pick, who worked secretly for Al Capone. The mansion become a speakeasy that was favored by aristocrats and gangsters alike. Folks were shot and killed on the premises during this era and their ghosts, along with gangsters and servants, seem to still be hanging around.

Some of the activity includes:

In 2008, guests of Gold Suite were locked out of their room. It seems that the deadbolt mysteriously locked from inside. One staff member witnessed a vacuum cleaner cord being unplugged from a wall by something invisible.

Some of the resident ghosts have been identified and a list reads like a cast of characters from a very complex play. A few of these are:

Before it became the Old Sherman House Restaurant, this 125 year old house was home to the William Sowiak family from 1957 to 1982. Later, Tim and Louise Mulderink bought the house and turned it into the Old Sherman House in honor of the early resident Eugene Sherman. Both couples report having encountered strange events on the property. 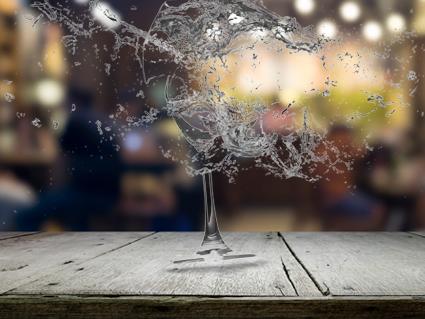 Prairie Ghosts reports on the Old Sherman House Restaurant haunting with instances such as:

The Mulderinks researched and when they discovered that former residents church deacon James Pierce and his family considered alcohol evil, they believed they'd found the offended ghosts. However, it's said that the paranormal activity eventually drove the Mulderinks out of business.

New owners re-opened and named the restaurant The Cottage Cafe. Their page on Facebook reveals a limited menu with a greater emphasis on various paranormal events, such as past life and psychic readings and psychic fairs.

Most Haunted Funhouse - Dungeon of Horrors in Wisconsin Dells 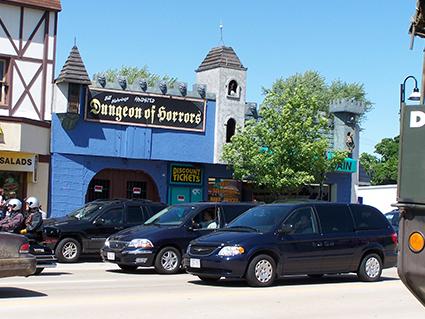 The building has been the scene of several deaths. Unexplained Research lists these deaths as follows:

Unexplained Research interviewed Dungeon of Horrors owner Mr. Nehring who verified that employees don't last long on the job due to the paranormal activity. Nehring said that during the past 24 years the majority of his employees have experienced some type of ghostly activity, which is most active during the month of August. It seems the most active spirit is a man wearing glasses that enjoys taunting people by following them around.

Listed with the National Register of Historic Places, the Octagon House is considered one of the most haunted places in Wisconsin. However, it is no longer open to the public. The Octagon House was built in 1856 on the site of what was once an Indian village. Over the century, a fort stood there as well as a trading post and even a settlement house.

In 1975 Helen Hanson purchased the house, and it was during restoration that hidden passages and an underground tunnel were uncovered. The house, it was discovered, had served as a station for the underground railroad. Slaves stayed in the house before continuing their journey to Canada and freedom.

Unlike some haunted places, the majority of the ghosts don't appear to be malevolent.

Fairlawn Mansion, a 42-room Victorian mansion, is now a museum. In 1891 the Pattison family moved into the mansion. They often sponsored immigrant Scandinavians who in turn served in the Pattison home to repay their passage expenses. 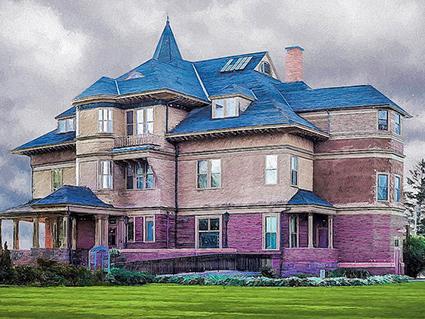 One of the ghosts that haunts the museum is often thought by visitors to be a museum guide. She's reported to be very kind and helpful to visitors, according to Prairie Ghosts. The ghost guide's real identity is unknown, but she could have been a servant in the mansion who may have been "murdered by her husband, shortly after leaving the sanctuary of the Pattison home."

After the Pattisons moved out of the house it eventually became an orphanage from 1920 to 1962. There are reports of two ghost children. The apparitions of these two children are seen playing around the swimming pool located in the building's basement. The spirits residing in the museum seem happy to be there.

In May 2015, the International Paranormal Society met to see if they could communicate with the resident ghosts though they have yet to publish their findings.

Most Haunted Road in Wisconsin - Highway 12 in Baraboo

The story of the phantom man seen along Highway 12 in Baraboo is one that's told by many drivers. The hitchhiker is seen walking late at night dressed in 1960s clothing. Many speculate that he's a returning soldier from Vietnam. 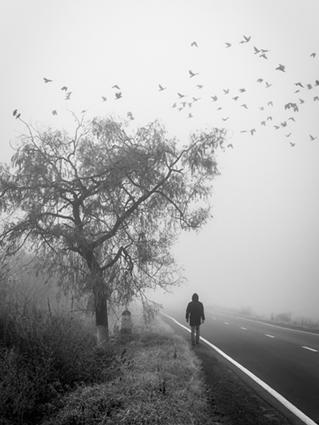 The ghost has shoulder-length, greasy black hair. He wears some type of baseball style cap and a green vest. He's also wearing a dark long-sleeved shirt and a pair of jeans. The story goes that the witness passes the phantom man once while traveling on Highway 12 and then, a few miles later, passes the same man for a second time. The driver is left stunned and confused over seeing the same man in two different places on the highway, miles apart.

One eyewitness wrote about his encounter on the website Ghosts of America. The driver had never before heard the story of the phantom hitchhiker. He recounted that the first time he passed the man between 2 and 3 am. The second time he passed the same man, the driver was unnerved. Later, his girlfriend was surfing through various ghost tales on the internet when the story of the phantom man on Highway 12 popped up. The eyewitness reports were almost identical to his.

If you want to see the Phantom Man, try driving along Highway 12, Baraboo, WI at night.

The Wausau Downtown Airport is said to be haunted by its former airport manager Archie Towle. According to Unexplained Research, Towle's ghost has been accused of turning water faucets off and on and witnesses have also seen a shadowy figure nearby. 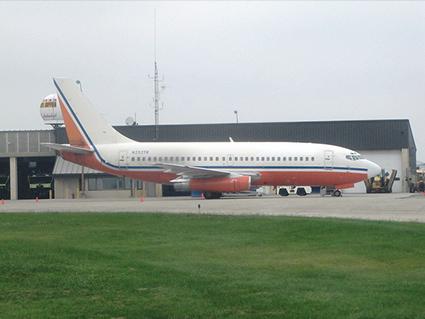 The book Weird Wisconsin reports that in 1945, Towle died in a plane crash at the airport. Witnesses have since seen Towle's spirit roaming about the hangar. Footsteps that "sound like wing tips walking across a hardwood floor" have been heard. When the airport underwent renovations there was a noticeable increase in paranormal activities.

The book tells of an employee working late one night. The man was in his office on the second floor office when he was startled by a pounding sound that seemed to be coming from a closet. He answered by knocking on the wall. He yelled for Archie to "keep it down." The employee reported that the pounding moved to the outer wall and eventually "made its way around the entire building."

von Stiehl Winery, the oldest licensed winery in Wisconsin, is housed in an 1868 Italianate building constructed as a brewery that went out of business in 1886. The building includes three underground tunnels carved out of limestone bedrock. Until the 1960s it was used for various businesses, such as a warehouse, washing machine factory, factory for making fly nets for horses, and feed storage. It was purchased and restored in the 1960s by Dr. Charles Steihl whose hobby was making wine. It's believed that Dr. Steihl never left his beloved winery and his spirit still resides there.

The bottling room is most active with paranormal events such as:

Paranormal Investigation of the Winery

In 2012 the Fox Valley Ghost Hunters investigated the winery for two nights. The owners reported:

Other Reports of a Haunting

Employees at the production plant have reported:

Marquette University is a "private, coeducational, Jesuit, Roman Catholic university." According to the Marquette Wire, Helfaer Theater and Humphrey Hall dorm buildings are two of the hotspots for paranormal activity. 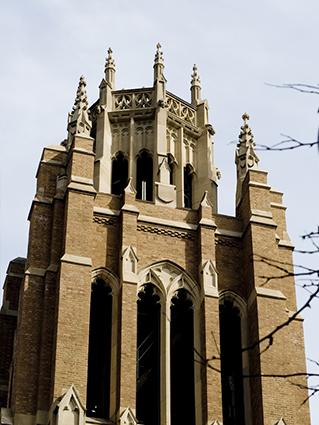 There are many other haunted areas on the campus as well.

Location of the University

These are but a few of the many places said to be haunted in Wisconsin. With both Native American and early Colonial settlements, there is an abundant history here ripe with tales of ghosts and supernatural activity.