Get your kicks on a haunted road trip along Route 66. Find Bobby Troup's classic song Route Sixty-Six (written in 1946) on your playlist and put your car in drive. This iconic song describes driving from Chicago to LA along the Mother Road, which features many spooky stops for ghost hunters.

Your road trip begins at Jackson Boulevard and Michigan Avenue in Chicago where Route 66 begins. Illinois pays tribute to the famous Route 66 with a total of 31 Route 66 Wayside Exhibits spread out over 17 communities dotting the road.

Situated on top of Mount Lookout Park, McPike Mansion was once the town's crown jewel. Abandoned sometime in the 1950s, it is under restoration and listed on the National Register of Historic Places. Due to its current state of repair, the cellar is the only area of the house open to public tours. However, the crypt and surrounding grounds are filled with paranormal activity, especially during October. This stopover is about 35 miles west of Route 66, but worth the journey. Orbs, apparitions of a man, woman and a child, EVPs and shadow figures are some of the paranormal activities witnessed.

The mansion is open on Saturdays, except in October when its open on Fridays and Saturdays at 7 pm for special ghost-themed tours. Spirit communication with spirits using dowsing rods and a cellar session with Medium Sandy Little Lizard are part of the 1.5-hour tour. You can also participate in the Annual October overnight campout. (618) 830-2179.

Where to Dine and Sleep

Stay at The Beall Mansion at 407 E. 12th St, Alton, IL 62002 (618) 474-9100, a boutique Bed & Breakfast Inn that features a 24-hour all you can eat chocolate buffet. Some claim the mansion is haunted. Regardless, it is steeped in history and famous guests, such as Mary Todd Lincoln and Jesse James.

Other Places to Visit in Alton

While in Alton, be sure to visit The Mineral Spring Hotel, converted into an antique mall. Employees and visitors have reported three possibly four different resident ghosts along with sounds and sickly-sweet scents. It is located at 301 East Broadway. You can also schedule a ghost walking and/or overnight tour with Mineral Springs Haunted Tours located at 301 East Broadway # 311, Alton, IL 62002 (618) 465-3200. 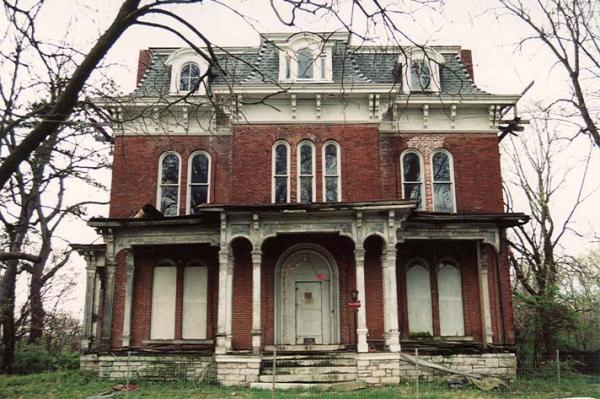 The forgotten town of Avilla is located right off Route 66 and is dubbed a living ghost town (circa 1856) with around 100 residents. This is a place you can visit, although much of the town's buildings are abandoned. Still the haunting tales of ghosts should be satisfying for a paranormal visit. Old Flo's Tavern is still occupied and is next door to the IOFF Lodge (abandoned) and the Old French's grocery store (abandoned).

The ghosts said to be roaming about the town include Bloody Bill (William T Anderson) a Confederate guerilla leader killed in 1864. Along with him is the headless Rotten Johnny Reb also known as the Avilla Phantom Bushwhacker who searches for his missing head. According to legend, Johnny has been blamed over the decades for numerous deaths and is responsible for the townspeople abandoning Avilla. There's also the Death Tree where these ghosts are seen hanging about. And, if that's not enough to satisfy the most curious ghost hunter, there's the abundance of shadow people seen in windows, hallways and walking about the town roads.

Where to Stay, Dine and Visit

If you visit Avilla, you'll need to go to a nearby town for accommodations and food. The Grand Avenue Bed and Breakfast located at 1615 Grand Ave, Carthage, MO 64836 (417) 358-7265 is a Queen Anne Victorian. Built in 1893, this B&B give you a true sense of the past. There aren't any known ghosts haunting this lovely B&B, but you can participate in Murder Mystery venue. After breakfast visit the local sites, such as Civil War Museum and Battlefield, the George Washington Carver National Monument. There are plenty of places for lunch and dinner, including Lucky J Steakhouse and Arena, Mother Road Coffee, Iggy's diner and Boomer Sooner BBQ. You may decide to enjoy a touch of nostalgia at the Route 66 Drive In open Friday through Sunday.

Motor on down to Oklahoma City and stop over at The Skirvin Hilton known to be haunted with numerous witnesses, including the NBA New York Knicks who blamed an off game on the night they spent being haunted in the hotel (2010) and one Los Angeles Lakers team member, Metta World Peace, claimed more than one ghost touched him inappropriately during his stay.

History of Hotel and Its Ghosts

In 1911, The Skirvin Hotel opened and was touted as the newest, best and finest hotel in all of Southwest. It remained a destination speak-easy throughout Prohibition. A 10-story tower, the hotel features 224 rooms and many seem to be occupied by resident ghosts, especially one, a maid named Effie, said to have been owner WB Skirvin's mistress. When Effie became pregnant, it's said that WB locked her in a room. After the birth of her child, she began a downward spiral of half-crazed and depressed. One day, she took her child and jumped from the window, killing herself and her baby.

Effie and Other Ghosts Haunt Hotel

Her ghost is said to still haunt the hotel. Sounds of her crying, an infant crying, men guests being propositioned by a disembodied voice, showering men have discovered the apparition of a naked woman and others, like the Metta have claimed sexual assault by an invisible being. Objects float about on their own and strange sounds are reported.

Aside from the hotel, you may want to get a bite at The County Line BBQ Restaurant located at 1226 NE 63rd (405) 478-4955 for lunch or dinner. Gangsters hung out at this spot, once a lively night spot. The attic is said to be a hotspot for paranormal activity, where a bordello once operated.

Shop with Ghosts and Visit Museum

Be sure to visit Langston's Western Wear Store (circa 1910) and go on a shopping spree with the ghosts of Patty and Rose, two Taxi Dancers (dance hall). Said to haunt the first (store of western wear) and second floors (office spaces), Patty's boyfriend shot her in a fit of rage and distraught over her death, Rose hanged herself in a room on the second floor. The Oklahoma City Zoo Aquatics Building is said to be haunted by the apparition of a woman with long hair. 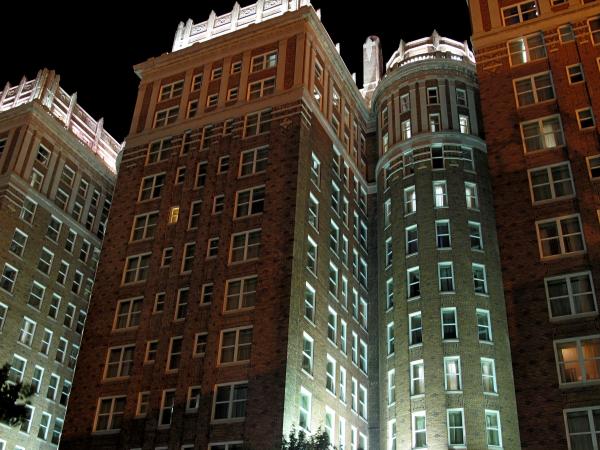 Located just one block off Route 66 at 106 North San Francisco Street, the 73-room Monte Vista Hotel in Flagstaff, Arizona is a must-stop ghostly visit. You may not get much sleep thanks to the many resident ghosts. However, you can enjoy a delicious evening meal and drinks before setting off to your room. Known for its big cast of ghosts and paranormal activities, the hotel has hosted a wide range of famous guests, especially 1930s to 1960s movie icons, including western movie hero, John Wayne who saw a ghost in his hotel room.

The hotel isn't shy about their many resident ghosts. They encourage guests to try to communicate with their guest ghosts and to ask their staff, especially housekeeping to share their many stories of ghostly encounters. Some of these include, a shadow man, elevator attendant, phantom bell boy, bank robber, two prostitutes, young boy, cries of an infant, meat man, a creepy rocking chair and a dancing couple. Light bulbs are found unscrewed or missing, disembodied voices and apparitions and shadow silhouettes moving throughout the building.

Other Eats and Haunted Places to Visit

You may also want to check out The Museum Club (circa 1931) a former roadhouse. Pappy, the former owner in the 1960s to 1970s is said to haunt the restaurant along with his wife, Lorna. The mischievous couple enjoys playing around with bottles and standing beside visitors. Located 3404 Historic Rte 66. Other haunted places to visit, include Orpheum Theatre where a shadow figure walks the balcony aisle and the Flagstaff Historic Railway Station (circa 1926) where disembodied creepy voices and apparition of period-dressed man frighten visitors. Two hours west of Flagstaff, you can visit the Grand Canyon Caverns accessed by a 21-story elevator and view the Grand Canyon at mile marker 106. 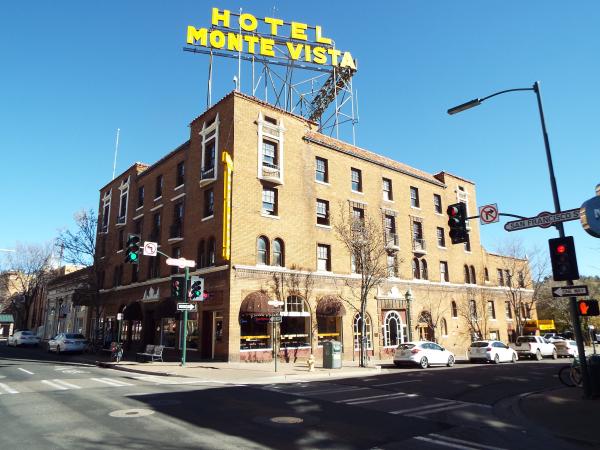 On the way to LA, you'll want to stop by Colorado Street Bridge located at 504 W Colorado Blvd in Pasadena, California. Built in 1912, the Colorado Street Bridge was once part of Route 66. The Arroyo Seco River flows beneath the bridge. Known as Suicide Bridge, more than 100 documented cases of suicie haunt this bridge. You can stop to take a breather and perhaps meet up with a ghost on the bridge featured in the movie, La La Land.

Before Route 66 was rerouted, the Aztec Hotel (circa 1925) used to be right on the famous Mother Road. It suffered from years of neglect until 1978 when it was listed on the National Register of Historic Places and in 2000 with National Park Service's Route 66 Corridor Preservation Program grant assistance restoration began. Located at 311 West Foothill Blvd. in Monrovia, California, the 44-room complex also has a restaurant, Mayan Room Restaurant and a lovely courtyard. (626) 358-3231. With years of being abandoned and used by drug addicts and various transients, the hotel is said to be haunted. Room 120 is said to be haunted by an aspiring actress who met her untimely death at the hands of her husband. Do you dare to request this room number?

Other Places to Stay, Dine and Visit

One of the most haunted Los Angeles hotels include the Biltmore Hotel where the Black Dahlia (Elizabeth Short) was murdered outside the hotel. She haunts the hotel interior and is seen by guests and staff. 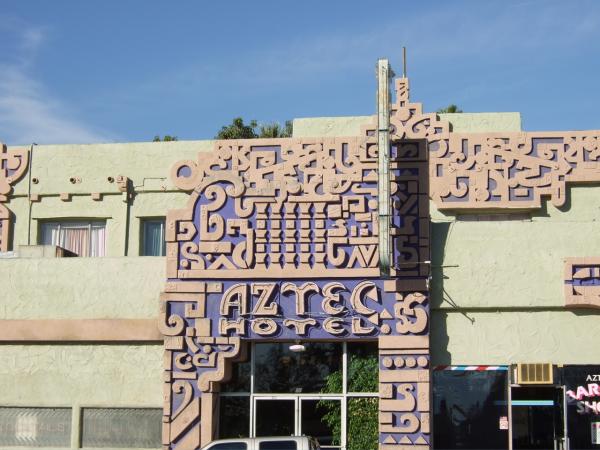 There are many haunted places you can visit on a haunted road trip traveling Route 66. Take time out to explore little known places and learn the local ghost lore.