There's more to a road trip along the West Coast than big trees and ocean waves; there are also plenty of haunted places to stay, eat, and visit along the way. From north to south, try all or part of this haunted road trip along America's Pacific Coast.

Your haunted trip starts even farther west than the West Coast on Orcas Island. One of the San Juan Islands, you can reach Orcas Island by taking a ferry from Anacortes, about a 50-minute crossing.

Built in about 1906, the mansion at the Rosario Resort & Spa drips with Old World elegance. The resort is believed to be haunted by the ghost of Alice Rheem, whose husband owned Rosario in the 1920s. Visitors have long reported Alice sightings as well as hearing the clicking of her heels on wooden floors and other ghostly activities. The Rosario Resort & Spa is located at 1400 Rosario Road in Eastsound on Orcas Island. 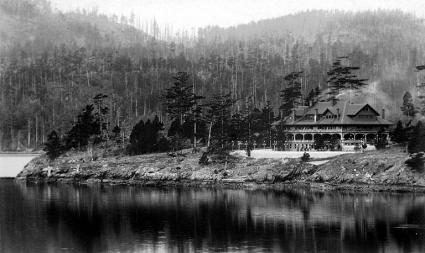 Bask in the ambience of the resort and enjoy peaceful island life for a spell before moving on. You may just spot a pod of migrating orcas from the shore or ferry deck, so keep your eyes open.

From Orcas Island, take the ferry ride to Friday Harbor and then drive north to Roche Harbor on San Juan Island. There, you can stay and eat at the Roche Harbor Resort at the Hotel de Haro. The quaint hotel has some rooms with bathrooms and showers in-room, while the others are European style lodging with bathrooms down the hall. The hotel was built in the 1860s, and many believe it is haunted by the ghost of Adah Beeny, a governess to the children of the home's original owner. Employees report phantom sounds as well as doors that won't open even though they aren't locked and nobody is inside. The hotel is located at 248 Reuben Memorial Drive in Friday Harbor.

When you've spent enough time in the islands, hop back on the ferry to Anacortes and head south down Interstate 5 (I-5) to Olympia. In Olympia, exit on Highway 101 (US101) West and follow it to Grays Harbor County and Lake Quinault. It's about a 5-hour drive.

As you pass through Aberdeen on your way to Lake Quinault, be sure to stop at Billy's Bar and Grill located at 322 East Heron Street in Aberdeen. It's a casual dining restaurant, and people believe it is haunted by the ghost of a notorious serial killer, Billy Gohl, who was a bartender there. People have reported seeing poltergeist type activity such as glasses levitating and apparitions, among other paranormal activity. If you're a music lover, don't forget Aberdeen is the hometown of Nirvana front man, Kurt Cobain. Fans can stop and pay your respects at Kurt Cobain Memorial Park on Young Street before you leave.

From Aberdeen, head to the Lake Quinault Lodge, located at 345 South Shore Road in Quinault. The Olympic National Park owns the rustic lodge, which was built in 1926. It sits on the shores of lovely Lake Quinault amongst towering trees. Employees and visitors believe the lodge is haunted by Beverly the ghost. 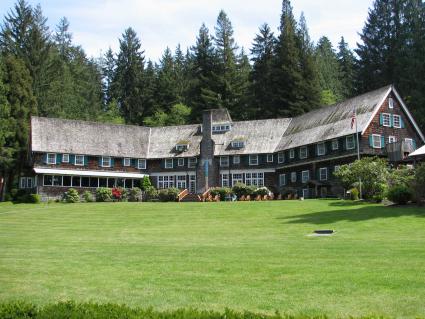 Lovers of sparkly vampires and werewolves with six-pack abs rejoice. Just 90 minutes north along US101 from the lodge is the tiny town of Forks, Washington. And while it's not necessarily haunted, if you or one of your traveling companions is a fan of the Twilight series of movies or books, it's worth a pass-through just to say you've been where Bella and Edward's love began.

Graveyard of the Pacific, Oregon Coast

From Lake Quinault, head south along US101 for almost four hours. You'll pass through several seaside towns to get to your next destination, a charming inn on the shores of Nehalem Bay. As you travel along the Oregon Coast, you'll pass the area where the Columbia meets the Pacific Ocean, often called the Graveyard of the Pacific because hazardous conditions frequently caused ships to wreck and notice sweeping ocean views that will take your breath away.

Check in to the Old Wheeler Hotel. It's charming, historic, quiet, comfortable, hospitable, filled with lovingly selected antiques, and haunted. It's also the subject of the upcoming documentary, The Permanents - A Paranormal Case Study. Many people who visit the Old Wheeler Hotel feel so at home there they don't want to leave, which makes this a fantastic place to stay as you explore the North Oregon Coast. The hotel is located at 0555, 495 US-101 in Wheeler. You can't miss it. Wheeler is tiny, and the hotel is painted yellow. It sits on the east side of the highway.

Either on your way to Wheeler (Astoria is about an hour north of Wheeler) or as a day trip, stop and drink and dine at Rogue Ales Public House located at 100 39th Street (Pier 39) in Astoria. The 21 and older establishment has a simple, affordable, and tasty menu and a haunted reputation.

There's a lot to do and see while you're here.

From Wheeler, head back south on US101 for about 7 hours and you'll come to Crescent City, California. If you wish to break your drive up, stop at the Heceta Head Lighthouse Bed and Breakfast for the night (it's about halfway there). The lighthouse is located at 92072 Hwy 101 South, in Yachats, Oregon. It's equal parts stunningly beautiful and haunted. Then, continue your drive down the coast to Northern California.

Situated in Six Rivers National Forest northeast of Crescent City, the Patrick Creek Lodge is located at 13950 US-199 in Gasquet. The accommodations are peaceful and rustic, and the 1926 built inn and restaurant is rumored to be haunted by Maude who reportedly hanged herself on room 16. Stay there if you dare.

Head into Crescent City to the Battery Point Lighthouse Museum. Timing is everything here, as you can only walk to the lighthouse at low tide, but when you can get there, it's both adorable and reportedly haunted by a playful and mischievous ghost. It's located on Lighthouse Way in Crescent City.

Of course, these are hardly the only haunted places you can visit as you travel the West Coast from Northern Washington to Southern California. As you head south, continue with a haunted ship road trip through the state, stopping in San Francisco at Alcatraz along the way. Once you've gone from North to South, you can truly say you're a well-traveled haunted West Coast road tripper.