What Is an EMF Detector?

EMF stands for electromagnetic frequency. EMF meters detect electromagnetic energy in the area. To understand how an EMF meter works it helps to know one of the universe's four basic forces, electromagnetism, occurs when electric current changes or moves. Stronger currents give off higher EMF readings. While you cannot see electromagnetic fields, they are often present in the atmosphere from natural, electrical, and magnetic sources.

Powered objects such as video and audio equipment, cell phones, and clock radios give off electromagnetic energy when a current flows. Likewise, power lines, outlets, and other common electrical items all generate EMF. Many natural sources of EMF exist as well, such as the charging of the atmosphere during a lightning storm.

EMF meters detect the presence of electromagnetic frequency through the use of one or more antennae that measure varying types of current such as AC or DC. When EMF is present, the meter registers a reading. The strength of the reading depends on the strength of the frequency.

EMF meters are quite simple, so there isn't much of a learning curve for how to read an EMF meter. Most contain either a digital or analog readout and an on/off switch. One of the most popular EMF meters for paranormal investigation, the K-II meter, has a series of lights in place of an analog or digital indicator. When there is no EMF present, no lights will be lit, there will be a "0" on the digital indicator, or the needle will be in the starting position over a reading of zero for an analog display. When EMF is present, the display will indicate through the presence of lights, movement of the needle towards higher numbers on the display, or with a higher number reading on a digital display. Meters may indicate a large or small amount of EMF. 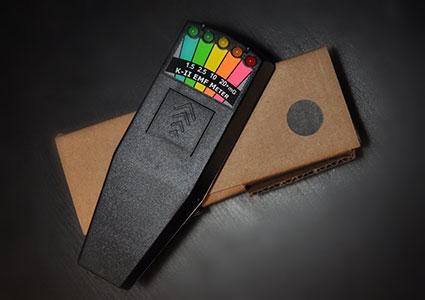 Some EMF meters may also have setting switches. For example, the popular Trifield Natural meter has settings for magnetic EMF (the kind not caused by electricity) and electrical EMF. With this meter, investigators typically choose the magnetic setting, because items like cell phones and electrical appliances will not cause the display to indicate the presence of EMF.

One popular meter paranormal investigators like to use is the K2 (K-II) meter. Some people believe this meter can communicate with spirits. They use it as a form of spirit communication, asking yes or no questions and waiting for the meter's lights to light up for a "yes" answer.

A K2 meter is one with marketing claims that it was specifically designed for ghost hunting. It has a simple interface including lights that allow investigators to see it in the dark.

There is no proof this works for spirit communication, and it is a misuse of the intended purpose of an EMF meter. Likewise, the K2 meter is highly sensitive to EMF, and cell phone signals or other types of EMF can cause it to light up.

There is a common misconception that EMF meters detect the presence of ghosts. Currently, no science backs up this assertion. Some investigators do notice anomalous EMF readings that occur concurrently with unexplainable activity. However, this evidence remains anecdotal with no basis in hard science.

A change in an EMF reading does not necessarily show a ghost is nearby, even in the presence of possible paranormal activity. Instead, it remains one more data point that may help measure anomalous activity. In order for this correlation to become a scientifically valid indicator of ghosts, a controlled, peer-reviewed scientific study needs to prove it is so. Thus far, no one has been able to prove or disprove the EMF-ghost hypothesis.

Why Paranormal Investigators Use EMF Meters

Despite the lack of scientific evidence backing up their usefulness in detecting ghosts, paranormal investigators frequently use EMF meters during investigations. They may do so for a number of reasons.

High EMF May Cause Weird Sensations

Finding high levels of EMF in an allegedly haunted location may suggest a logical explanation for reports of possible paranormal experiences. For example, some studies have shown that high EMF may affect melatonin, which plays key roles in sleep regulation. High levels of EMF in a home may provide a logical explanation for why family members experience sleep disturbances they erroneously associate with paranormal activity. Likewise, individuals who are hypersensitive to EMF may display a whole host of physical, mental, and emotional symptoms that may be wrongly attributed to paranormal activity.

Anecdotal evidence from paranormal investigators does seem to suggest a possible correlation between spikes on an EMF meter and the presence of ghosts, but the correlation remains highly speculative and relies on a number of assumptions. While there is no scientific proof of this correlation, it still remains interesting and provides investigators with another data point to evaluate.

Doing What They See on Television

While EMF meters can be a valuable tool in the paranormal investigator's arsenal, you should always be aware of the limitations of this equipment.

Many EMF meters, such as the K-II meter, are extremely sensitive to cell phone activity. Cell phones pulsing to find a tower, incoming calls or texts, and other cell phone activity can cause the meters to register a reading. Therefore, when using EMF meters in paranormal investigation, you should always make sure all cell phones are turned off.

Other Equipment May Cause False Positive

Other pieces of paranormal equipment, such as walkie talkies, can also cause EMF meters to register a reading. Test your meter with other pieces of equipment you carry to determine how it reacts in the presence of that equipment. For example, stand a few feet away from the meter with a walkie talkie and key the talk switch. Watch to see if the meter's reading changes. This will help you better understand your equipment and allow you to remove sources of false readings.

EMF meters do not detect ghosts. Rather, they measure changes in the electromagnetic frequency in the area. Therefore, use extreme caution when drawing conclusions about the meaning of anomalous EMF readings that occur during the course of an investigation. Never use readings as the sole evidence to "prove" a haunting.

Many EMF meters, such as the Trifield meter, are sensitive to motion. Lay the meter on a flat surface and do not move it. Allow it to settle before taking a reading.

EMF Meters and Evidence of Ghosts

While EMF meters are a popular piece of ghost hunting equipment, they do not detect the presence of ghosts or other paranormal entities. In fact, no scientifically valid equipment exists that can prove or disprove ghosts exist. Instead, paranormal investigators rely on an array of different tools to provide data to help them show that something anomalous is occurring.