Eyewitnesses claim Alcatraz is haunted. Once the most feared penitentiary to be incarcerated, desperate ghosts and spirits are believed to haunt Alcatraz. An inside guide reveals how Alcatraz is haunted by the insanity, murders, and suicides that occurred on a regular basis.

Inside Guide to Ghosts and Reported Hauntings at Alcatraz

Is Alcatraz haunted? The ghosts and legends, along with the many reports of paranormal activity over the decades seem to suggest Alcatraz is, indeed, haunted. Since the prison was closed, it was officially opened under the US National Parks Service as a tourist destination. Many people conduct informal investigations during regular tourist hours. Others seek special permission to conduct a night-time paranormal investigation. In 2017, the prison offered sleepovers for October 30 and 31 for $666.

The Battle of Alcatraz

The most prominent area of Alcatraz where people experience paranormal activity include Cell Block D. During the time it operated, the prison was rampant with stories of ghosts, so it was no surprise prisoners tried to take advantage by claiming they were under duress by a ghost. Understandably, when reports of Cell D-14 being haunted were spread, the guards shrugged them off and ignored inmates when they complained or became frightened. 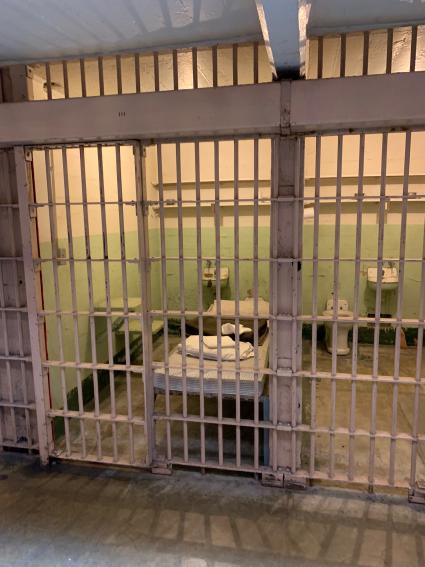 One case sticks out among the others and occurred sometime during the mid-1940s. The guards locked an inmate in Cell D-14, but he immediately began screaming there was a glowing-eyed creature in the cell with him. The man screamed the creature was attacking him, but the guards turned a deaf ear to the man's terrified cries. Even though he called out all night, none of the guards bothered to investigate. Eventually, the man stopped screaming and when the guards opened his cell the next day, they discovered he was dead.

It was reported the inmate's face was contorted into a terrified expression and a pair of handprints bruising wrapped around his throat. The autopsy is said to have revealed death by strangulation, but supposedly stated it was not self-inflicted. Rumors spread through the prison that one of the guards had strangled the inmate after hours of enduring his screams. The following day during the morning lineup, guards counted one too many inmates. It's reported that everyone witnessed an apparition of a convict vaporize into thin air.

Cell Block D seems to have the most paranormal activity. In fact, out of the 42 cells located in this section, four are said to be where the majority of activity takes place. Specifically, cell numbers 11, 12, 13, and 14 are the most investigated for paranormal activity. Cell 14-D is said to be consistently 20 to 30 degrees cooler than the other cells in the vicinity. The cell has been reported to be icy cold during the height of summer.

Many of the prison guards (1946-1963) reported various paranormal encounters. Some of these include:

Visitors and paranormal investigators share many reports of strange sounds. Some of these include: 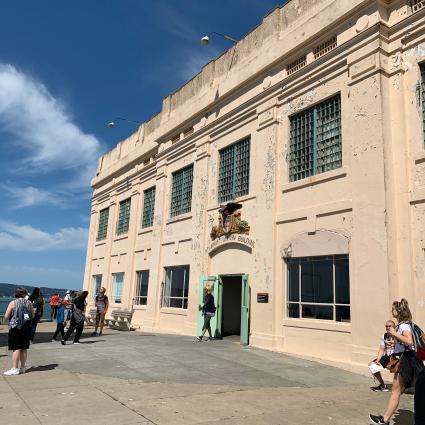 While there have been countless claims of people being touched, hearing ghostly sounds, and seeing apparitions, there's only a handful of evidence substantiating these claims. Over the past couple of decades, paranormal investigators have set out to gather such evidence. Some have captured what they believe to be proof with EVPs (Electronic Voice Phenomenon), photos, and other equipment confirmations. A few visitors have taken videos and photos they believe are proof of ghostly activity. 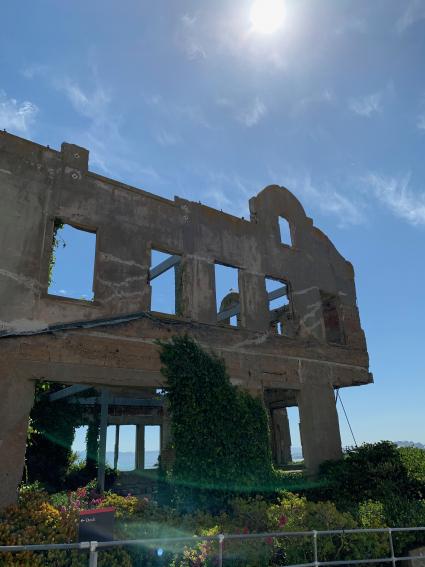 There has been quite a bit of internet misinformation about the ISPR Team's investigation, so ISPR team member Daena Smoller shares exclusively with LTK, what really happened at Alcatraz during the filming of that fated Travel Channel episode.

In 2000, a production company working on an Alcatraz-focused episode of a three-season series airing on the Travel Channel, contacted parapsychologist Larry Montz for his participation along with just one of his ISPR Team investigators, Daena Smoller. She states, "We reached the island while it was still dark and accompanied by a ranger, we walked uphill to the prison." Deana explains her role as part of the ISPR Investigative Team, "I was an additional psychic tool in the areas of empathy and physical mediumship."

With her psychic mediumship abilities, Daena began to sense the presence of an entity. She says, "In my case, my empathic episodes manifested in feeling physically or emotionally or both simultaneously, something that someone currently alive or deceased, experienced." For field work, she explains, "I was used as a psychic tool and there were never any guarantees and never did I pretend for the cameras and not stand in my own light of honesty." 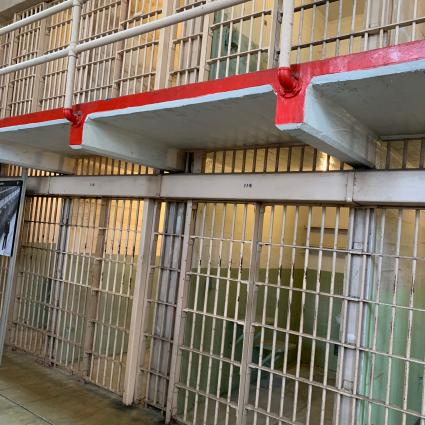 How Alcatraz Made Daena Physically Ill

The powerful negative energy of Alcatraz was something Daena felt during the entire investigation. She explains, "It made me ill to feel what it would have felt like to me to be trapped in such a small and gross space. This was not surprising at all, nor did I consider that a psychic experience."

Daena describes how she recalled entering the block of solitary isolation cells. She says, "I remember walking with Larry and the film crew was right with us. The next thing I was cognizant of was being in a dark area with Larry talking to me with a bit of urgency to his voice and trying to get me to stand up and walk out of the cell."

Finding herself crouched down in the back corner of a cell, Daena describes, "I felt like I was rocking back and forth ... and smiling. As I became more aware of my own existence, I felt like I knew I was insane and that I was actually happy to be where I was and that I belonged where I was." Time escaped Daena. She had no idea how long she'd been there. 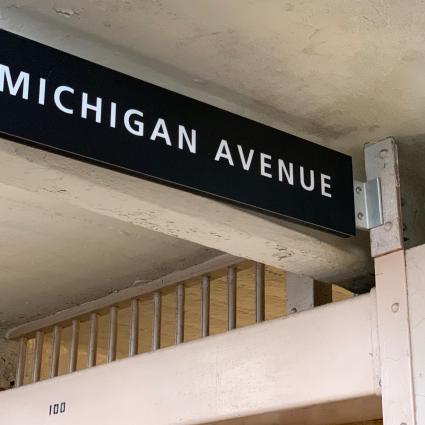 Larry quickly filled her in. Fortunately for Daena, Larry recognized the foreshadowing of an entity stepping in and taking control of Daena. "It was a male that stepped in," she explains, "Larry said that I threatened the cameraman with physical harm." Larry proceeded to question the entity and discovered the spirit had been a male prisoner at Alcatraz.

Want to Fight Me?

The spirit inmate revealed there were five other entities present and asked Larry if he'd ever been in a fight. Larry admitted that he had and asked if spirit wanted to fight him. Daena says the spirit responded, "I don't want to hurt the little girl," referring to her.

Daena shares that once the crew left the prison, they ventured into the Industrial Building. Immediately, she had contact with a spirit and an accompanying physical reaction, "I had an incredible pain above my shoulders and in my head." She also sensed the presence of a little girl. This confused Daena, until she later discovered the families of the island lighthouse keepers, prison guards, and soldiers lived with them on the island which included their children.

In 2014, the Daily Mail reported, "Tourists spooked by photograph of young woman waiting in the notorious prison's visitation block." The couple were on vacation and decided to visit Alcatraz. Sheila Sillery-Walsh held her iPhone 5c up to the window in the door of the inmates' visitation waiting room and snapped a photo. At first, her companion Paul Rice thought it was just Sheila's reflection until he noticed the woman in the photo wore clothing and a hairdo from the 1930s or 1940s. Did she capture a photo of a spirit woman who had visited an inmate at Alcatraz?

The SyFy channel's show Ghost Hunters celebrated its 100th episode with a live broadcast from Alcatraz. Some of the evidence captured during the show included the disembodied woman's voice saying either no or hello. One cast member came face to face with a dark shadow.

In December 2009, Ghost Lab conducted an investigation at Alcatraz for one of its episodes. One of the EVPs captured during the investigation proved very disturbing to one investigator.

The team recorded another attempt to contact spirits in The Dungeon.

Collection of EVPs Captured by Anthony P Anderson at Alcatraz

Author of Alcatraz History True Or False, Anthony P Anderson shares several of his 2010 EVPs session at Alcatraz captured during an overnight paranormal investigation at the prison.

Becky Vickers captured some impressive EVPs during a day trip. The EVPs begin around 8:32.

Bob Davis participated in an overnight investigation and capture this ghost just wanting to say, "Hey!"

From 1850 to 1933, Alcatraz was a military post originally created to defend the bay but quickly began the dual purpose of a military prison. When it was turned over to the US Department of Justice, the prison became a maximum-security with minimum-privilege penitentiary. The most notorious criminals were sent to the prison island. Many people believe the forms of punishment carried out within the walls of Alcatraz contributed to the massive number of reported hauntings.

Prisoners at Alcatraz were placed inside windowless, cold cells for punishments that could last from one day to weeks. Prisoners often emerged from the "Strip Cell" a.k.a. Oriental, the Hole, and the Dungeons, insane. These men endured great physical and psychological torture from living in the dark and cold, surviving on small amounts of bread and water. Suicide rates were high. Murders were committed in the prison, and mental illness resulted from the living and punishment conditions.

Deciding if Alcatraz Is Haunted

With so many eyewitness accounts of strange happenings inside the walls of Alcatraz, it is difficult to discount all of them. When decades of ghostly reports are added together, the evidence seems to point to paranormal activity in the former prison. At the very least, something unexplained is taking place. Whether it is residual, intelligent/interactive, demonic, what's known as shadow people or poltergeist activity, or a combination, people can investigate and find out for themselves.

2
Comments
© 2006-2020 LoveToKnow, Corp., except where otherwise noted. All Rights Reserved.
Resources, Advice & Tips for Covid-19
Read More
Is Alcatraz Haunted? Inside Guide to Its Ghosts & Legends