There are several scary haunted places in Delaware you can visit. You can find places, such as Fort Delaware that offer opportunities to participate in a paranormal investigation.

The history of Fort Delaware dates back to 1813. Fort Delaware served as a harbor defense for Wilmington and Philadelphia. Located on Peas Patch Island and situated in the Delaware River, the fort is only accessible by ferry. The US government completed Fort Delaware in 1859. During the Civil War, the fort was used as a Union prison camp with 12, 595 Confederate prisoners. The fort was briefly used during World War I and World War II. In 1951, it was transformed into a state park.

It's no wonder Fort Delaware is considered one of the most haunted places in the state/ Fort Delaware has been featured on paranormal shows, such as SyFy's Ghost Hunters. During the Civil War, many of the thousands of prisoners perished on the island prison. The dungeons are believed to be haunted by a lot of paranormal activity reported. Shadow figures, full-bodied apparitions, disembodied voices, rattling chains are a few of the paranormal encounters. WHYY reports a female apparition was captured on video as she walked through the Officer's kitchen wall. It is believed her angry disembodied voice calls people by their name and shouts for them to get out.

You can also visit Fort Delaware and take a guided tour with a period-garbed interpreter. The Fort is located at 45 Clinton St. The ferry runs every 30 minutes. Check various events, dates and times and then reserve your place on the ferry. (302) 834-7941.

According to The Shadowlands, the Dead Presidents Pub and Restaurant is a well-known haunt. Housed throughout this 200-year-old building is a collection of various United States Presidents memorabilia. There were no reports of paranormal activity before the accidental death of longtime patron, Lemonade Mullery who slipped in the pub bathroom. Since then, stories of ghostly antics have haunted the pub. Patrons and staff share stories that include, dishes being thrown, pranks followed by manic giggles, disembodied voices/screams and even gameboard dominoes floating about.

Said to be the first place where the American flag was raised, Cooch's Bridge was the scene of the only Delaware battle (1777) often referred to as a skirmish. General Washington selected 1100 elite marksmen to engage the British over a two-mile stretch that ended at the bridge. 50 American Patriots died in the fight to slow the British troops making their way toward Philadelphia, the American capital at the time.

Legend tells of an unfortunate British soldier whose head was literally shot off by cannon fire. It's said that on a moonless foggy night, the headless British soldier is seen wandering along the roads in search of his head.

You can visit the Cooch's Bridge Museum located at 2029 Sunset Lake Road in Newark on the first and third Saturdays of each month from 10 a.m. to 4 p.m. Admission is free. Call (302) 584-4570 to make an appointment for other visits.

The Bellevue Mansion, located in the Bellvue State Park, is said to be haunted. The historic estate of William du Pont, Jr. overlooks the Delaware River. It's said the upper floors have so many mysterious and odd paranormal activities that these areas are closed off to visitors. Some of these include unexplainable mysterious rearrangements of the dining room furniture, disembodied laughter and screams, flickering lights and malfunctioning electronics.

The park is open daily from 8 a.m. until sunset (April through October) and Monday through Friday from 8 a.m. to 4 p.m. (December through February). You can participate in paranormal tours during October (check available dates and times). 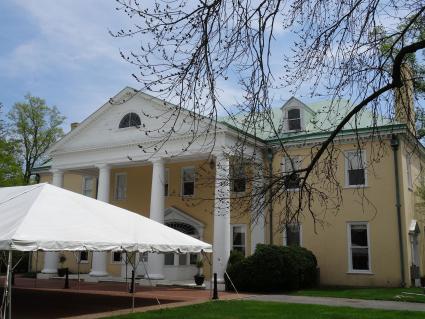 Woodland Beach is nearly forgotten and sits along the Delaware River just before it dumps into the Delaware Bay and the Atlantic Ocean. Once a bustling resort town in the early 1900s, visitors enjoyed strolling along a boardwalk, riding the roller coaster and various amusement rides and catching a ferry. All that is gone, reportedly destroyed by a 30-foot tidal wave. The only remnant of what used to the boardwalk is a few pilings.

Locals and visitors believe Woodland Beach is haunted by the spirits of the past. The most common reports are of shadow figures and faint apparitions strolling along the water where the boardwalk was. It's said that if you wait until night, you, too may see these spirits still enjoying Woodland as it used to be. The beach is open to the public.

There are several scary haunted places in Delaware that are open to the public. Whether you explore state parks or a public beach, you may just see a ghost or two.