Turnbull Canyon in California has a sad history filled with tragedies, murders and other untimely deaths. Many people believe the canyon is cursed and lost souls haunt its hills and ravines.

Are the stories of satanic worship, witchcraft, occult rituals, Native American spirit revenge, and Hell's Gate true or are these scary stories just myths? Where the sad history of Turnbull Canyon begins is really unknown, but it's speculated it began when settlers took the land from Native Americans and the spirits of the tribes haunt the canyon seeking revenge.

No Documentation of Tale

There's no documentation to support this common belief, just as there is little documentation for many of the paranormal claims about the canyon. This hasn't stopped the endless tales of the haunted canyon ruled by an evil force.

Some people point to the naming of the canyon as the start of the hauntings and mysterious happenings eyewitnesses report. Canyon namesake Robert Turnbull, a local Quaker, was murdered in 1888 and many believe his murder unleashed a wave of evil that has doomed the canyon ever since.

Turnbull Canyon tales of satanic rituals being performed and gruesome stories of children and even babies being sold in secret transactions and their sadistic sacrificial deaths. Some people believe a dark evil lurks among the canyon hills - waiting for its next victim.

The stories about Turnbull Canyon are filled with frightening sights of the ghosts of murdered sacrificed children, the ghostly body of a hanged man, KKK members meeting in secret in the canyon valley, witches and Satanists performing rituals and human sacrifices, and perhaps the most benign report of hikers hearing phantom footsteps as they walk the canyon trail.

Group Tours shares stories of cultists wearing black robes being responsible for kidnapping children from orphanages. One story tells of a local man coming upon the group with a young boy suspended upside down on a cross. The story doesn't give any other information and is often viewed as just an urban legend. 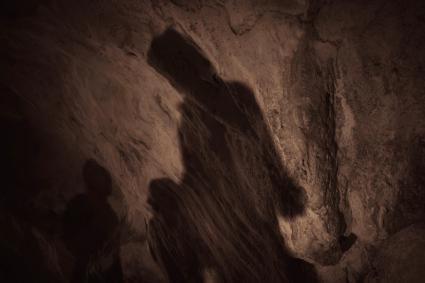 The ghosts of the murdered children have been seen in the canyon at all hours of the day and night. Some visitors report seeing bodies hanging from what's been dubbed, The Hanging Tree. The body of a man is seen one moment and the next moment it's gone.

There's a long-enduring story of a former asylum for the insane that existed in the canyon sometime in the 1930s. Although there's no record of the ruins the stories persist. One story tells of partying teenagers burning the complex down, but not before one of the boys was electrocuted.

Weird US reports the Native Americans avoided Turnbull Canyon, known to them as Hutukngna (Dark Place). There are all kinds of rumors and speculation about the Gabrielino-Tongva Tribe and their avoidance of the canyon. These include warnings of witches and ghosts residing in the canyon.

The path that lies between Skyline Drive and Descending Drive is said to be the way to Hell's Gates. However, the truth is this is private property. It appears in the video below that interlopers and curiosity seekers have forced the homeowners to take extreme measures to discourage trespassers.

This video shows the fortification of the supposed entrance to the trail leading to Hell's Gate on private property.

The airplane crash of 1952 is often recounted as evidence of the evilness lurking in the canyon, drawing death and the macabre to it. Flight 416 from New York City crashed in the canyon killing all 29 passengers.

Over the decades, the story of the crash has morphed into several urban legends. The stories center around how the canyon evil was responsible for the crash in a demand for human sacrifices. However, Forgotten Tales presents its investigative documentary, The Crash of Flight 416 West - A Forgotten Tale of Turnbull Canyon that ultimately discredits all these urban legends.

The murdered bodies of two women were recovered from the canyon between 2002 and 2011. In 2009, one woman, the victim of a stabbing survived and was able to identify her attackers who were arrested.

While the Turnbull Canyon is filled with a history wrought with sadness and tragedy, the stories of paranormal happenings seem to be mostly urban legends. Still, many who venture the canyon trail report feeling uncomfortable as though someone is watching them.