A séance is defined as a meeting of people attempting to communicate with the dead, typically through a medium. These gatherings have been taking place for centuries, and though the tools and methods used to conduct a séance have changed over time, the main elements and goals have remained the same.

What Is a Séance

The word séance is French and means seat, sitting or session. It's a derivative of and old French word, seoir, that meant "to sit." According to Evelyn Dorothy Oliver and James R. Lewis's Book, Angels A to Z, "References to séance-type communications go back as far as the third century." Of course, the details of these early meetings are not widely recorded.

In 1848, three sisters in New York, Leah, Margaret "Maggie" and Kate Fox made sensational news with their claims to be communicating with spirits. The sisters reported that a spirit told them a body had been buried in the basement of their family home, although this wasn't proven until 1904.

The two youngest sisters Maggie and Kate said spirits communicated with them through rapping sounds (typtology). The girls became international celebrities and conducted séances for the rich and powerful. Older sister Leah guided her younger sisters in their mediumship. They are credited for playing a major role in the development of Spiritualism.

Séances and the Spiritualism Movement

According to the National Spiritualist Association of Churches, Spiritualism is "the Science, Philosophy and Religion of continuous life, based upon the demonstrated fact of communication, by means of mediumship, with those who live in the Spirit World."

Séances were embraced by the Spiritualism Movement that gained momentum from the 1840s through its peak in the 1920s. Mediums emerged to facilitate the séances, although they weren't required.

In the mid-1800s séances were traditionally held within a circle formed by attendees known as sitters. The purpose of the circle was to create an unending field of energy to attract spirits. The circle was typically formed by sitting in chairs placed around a round or oval table. Depending on the medium, sitters could be instructed to hold hands, grasp the wrist of the person sitting to their right, or simply flatten their hands onto the table in front of them. The medium could sit in a spirit cabinet or join those at the table. 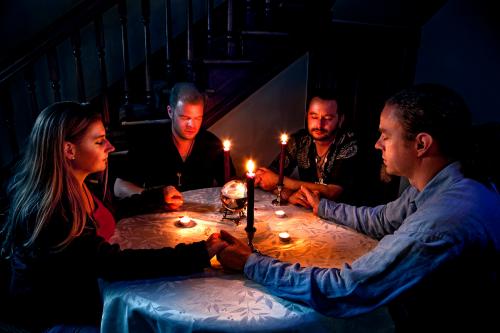 Séances didn't always include a medium, which made them very popular since most people conducted séances in their homes. These were known as home circles. Usually these were small groups of friends and family who sat around the dining table. The doors and windows of the room were closed and the lights usually turned out or a candle lit to provide some light in the room.

Those sitting in the circle would attempt to contact the spirit world and ask questions. Many people reported raps, moans and other sounds during the séance. Sometimes, a person within the circle might emerge as a gifted medium.

How a circle was conducted often depended on the medium. Some required the sitters to hold hands in order to build up the energy in the room for the spirit to use for manifesting. Other mediums forbade the sitters from touching each other, requesting that they face the table so they were all looking at the center of the circle.

According to Oliver and Lewis there were specific guidelines followed for holding a séance:

A safeguard against becoming obsessed with spiritual contact was put in place by restricting group meetings to no more than two or three a week, with no more than two hours duration for each one.

Early Mediums and Their Séance Tools

The Fox sisters popularized the use of typtology that evoked spirits to rap once or twice for yes or no questions. The tipping of tables, achieved by lifting up one side then allowing the table to fall back onto its legs several times, was another method, often hoaxed by mediums.

As the showmanship of séances emerged, the tools became more elaborate. Some of these earlier tools used by mediums during séances were proved to be props used by hoaxers and were abandoned when the public began to mistrust those using them.

During the peak of the Spiritualism movement some of these tools included spirit trumpets. The spirit trumpet was a "speak tube" shaped like a horn. It was used to supposedly amplify the spirit's whipsers.

Spirit slates were also a popular showman tool. These consisted of two chalkboards that were tied together in book style. The medium would open the slates to reveal a message written in chalk, supposedly penned by a spirit.

These were special lightweight tables, which were said to rotate, float, or levitate when spirits were present. Being lightweight meant that hoaxers could easily manipulate the table as desired.

The spirit cabinet was introduced and popularized by the Davenport Brothers during the 1850s. These portable closets were used as a medium's workspace. Typically, the mediums sat in the closet and were bound with ropes to demonstrate they weren't manipulating anything during the séance. Out of sight, the medium could then manipulate everything, from sights to sounds.

Some tools from the Victorian era were not used for trickery, and these have proven to be useful even today.

The spirit board or Ouija board is often a favorite medium tool. The medium is usually the one who asks the questions that the participants wish answered. The participants place their fingertips lightly onto the planchette. The spirit then uses their energy to move the planchette about the board to either spell out words or answer yes or no questions. 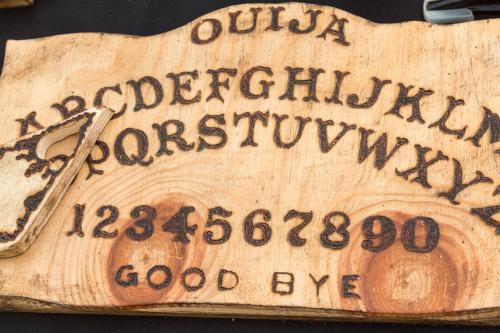 A pendulum can be used with a variety of pendulum charts in a séance, such as placing a photo of the deceased person in the clear window section. This chart has letters, numbers and a yes or no option. The pendulum is then guided by the spirit contacted through the medium to respond using the chart.

The same type of yes or no questions can be answered using tarot cards, and an experienced tarot reader can interpret various card layouts during a séance as opposed to a reading.

In the modern world, the rules of engagement for séances depend largely on the medium. Some prefer traditional techniques, but the majority are mental mediums as opposed to the physical mediums of the Victorian era.

The physical mediums were all about the manifestation of spirit into the physical, such as raps, moans, ectoplasm, tilting tables, direct voice, and apparitions. The showmanship of that period gave over to mental mediumship that typically calls upon three psychic abilties:

Today, seances are performed using a combination of the old methods and new ones.

There is a rich history of mediums communicating with spirits by conducting a séance. While many were outed as fakes, many others rose to celebrity status and were sought out by powerful people. The need to communicate with deceased loved ones is a powerful and driving force that is just as prevalent in modern society as it was during the heydays of Spiritualism and séances.

0
Comments
© 2006-2021 LoveToKnow, Corp., except where otherwise noted. All Rights Reserved.
Resources, Advice & Tips for Covid-19
Read More
What Is a Séance?