The Travel Channel's popular television show Ghost Adventures quickly became a viewer favorite. Nick Groff was one of the show's three original investigators along with Zak Bagans and Aaron Goodwin. In 2011, Ghost Adventures' Nick Groff joined LoveToKnow Paranormal from a filming location in Fall River, Massachusetts for an exclusive interview.

Ghost Adventures rocketed to national attention in 2008 with the release of 90-minute documentary in which Groff, Bagans, and Goodwin grabbed cameras and headed on the road in Nevada where they had spooky experiences in the haunted Goldfield Hotel and Old Washoe Club. At the time, Groff notes he had no idea where the filming would take him.

According to Groff, "In the beginning I thought we were just a couple of dudes going out to see if we could capture the unexplainable. If anything came of that, it would be awesome! I didn't realize it would turn out to be such a phenomenon. Now here we are years later and still visiting amazing locations and gathering incredible evidence. It's been a roller coaster ride."

Groff's Early Interest in the Paranormal 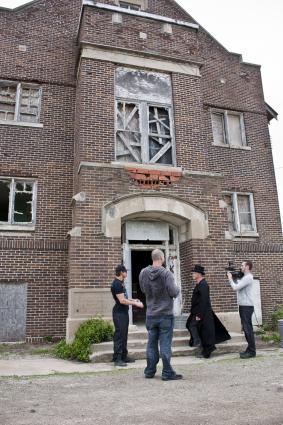 "It was a fascination," Groff notes. "I attended UNLV and was visiting haunted locations while I was there."

However, it wasn't until Goff met Bagans he knew he wanted to pursue it more thoroughly.

"It wasn't until I met Zak though, that we decided to capture it on video," Groff says. "I really wanted to try and see it with my own two eyes. I'd known Aaron for quite a while. The three of us teamed up and hit the road, never realizing where it would take us."

Even with his avid interest, however, Groff wasn't prepared for what they found.

"It caught us totally off guard," he states. "We were not really prepared for some of the stuff we captured. The Goldfield Hotel and the Old Washoe Club were amazing. Capturing evidence, going home and reviewing it was surprising. Seeing a full body apparition at the Washoe club blew our minds, but it was what provided the energy for what we do now. We keep striving to find that kind of stuff. We are trying to invent new equipment to get closer to spirits and show even better evidence. Every location we go to is so different than the next. It's amazing."

Even though paranormal investigation and Ghost Adventures became his full-time gig, Groff has never lost his enthusiasm for the paranormal. He says the entire team stays excited because they believe they're getting close to answers.

"The biggest question on everyone's mind is, 'What happens when we die?'" Groff muses. "I don't care what your background is, everyone wants to know that. It's on our minds too. I always think maybe I will have a personal experience, and it will be the one that answers that question. It is like when I was at Linda Vista Hospital in Los Angeles. I turned around and saw a ghost two feet in front of my face. That was a personal experience I will never forget. I walked away pumped up. Stuff like that keeps me pushing to try and capture more." 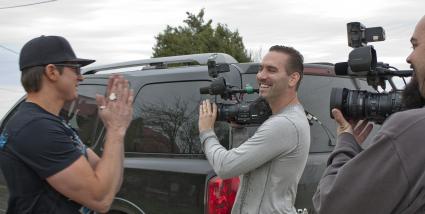 Groff on Location for Ghost Adventures

Groff mentions that Linda Vista Hospital encounter as one of his top 5 scariest and most interesting moments. Others included the Moon River Brewery, New Jersey Mental Hospital, and the Old Washoe Club.

"That location gets to me every time," Groff says about the Old Washoe Club. "When you not only hear the spirits but they know you by name, it's crazy."

And what does it feel like when Groff hears a spirit call him by name?

"All of my emotions drop. It's like free falling," he says. "When I hear someone call my name, it is mind blowing. I never thought in my life a spirit could intelligently know me by name. It's not just my first name. The spirits at the Washoe are saying, 'Nick Groff.' I can't wrap my head around it. How can a spirit say that and I hear it in the living world on this piece of equipment? I have a real connection with the Old Washoe Club. It creeps me out every time I go there."

He Still Gets Scared

Even though he's a seasoned investigator with years in some of the world's scariest locations under his belt, Groff admits he still gets frightened sometimes.

"It takes a lot to scare me. Over the years I've gotten used to it, but things still scare me. I'm the first guy to go off by myself though. It's scary when you sit by yourself in pitch darkness and you know the history. You have to stay mentally strong, but boom - something happens. It startles you. It doesn't matter how tough you are."

Groff remained on Ghost Adventures through 2014 when he left to pursue new ghostly adventures. After Ghost Adventures, he returned to television in 2016 co-starring in the docu-series Paranormal Lockdown with former Paranormal State investigator Katrina Weidman. The show entered its third season in 2018. Groff and Weidman appeared on an episode of the radio show Paranormal Underground Radio with the author of this article in 2016 and discussed Paranormal Lockdown. You can learn more about what he's up to now by following Groff on Twitter.