From the Keys to the panhandle, Florida's varied history makes it a haunted juggernaut. Filled with haunted lighthouses, dolls, hotels, restaurants, and more, there are plenty of haunted places you can visit throughout the state of Florida.

Opened in 1695, Castillo de San Marcos protected coastal Florida from threats both foreign and domestic. The Castillo is now part of the National Park System, and it's considered a standout haunted location in a city that's filled with ghosts. Spirit sightings include both Spanish soldiers and Seminoles, as well as a female apparition in a white dress. 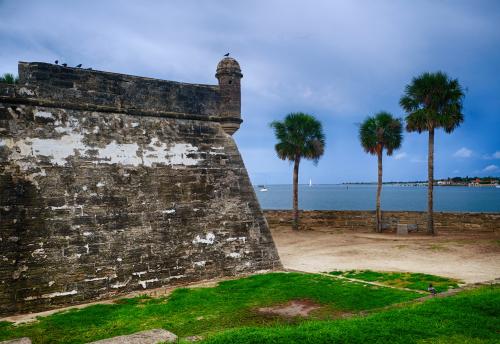 If you're in the Florida Keys, stop by the Fort East Martello Museum in Key West. It's home to one of the most notorious super-creepy haunted toys on the planet: Robert the Doll. Robert wears a sailor suit and is the size of a toddler. His face is rather unformed except for button eyes, and he holds a toy dog in his lap. It's said Robert follows people with his eyes, and he likes to move around on his own. His presence at the museum makes it worth a visit, but be careful. Robert doesn't take too kindly to those he feels disrespect him.

The Island Hotel and Restaurant is located at Cedar Key, directly west of Ocala. Cedar Key was a major port for shipping supplies for the Confederate Army. The building itself, originally a general store, has survived numerous hurricanes, tropical storms, and even a fire. Locals and visitors alike claim that the hotel is home to a total of 13 different spirits. In the basement, there is the spirit of a little boy that is still hiding after he was accused of pilfering from the premises. There is also Bessie Gibbs, former owner of the hotel. Apparently, she was full of personality in life, and her spirit enjoys playing tricks on hotel guests. She likes to lock guests out of their rooms, rearrange furniture and straighten paintings on the wall. The most common apparition, is that of a Confederate soldier standing guard on the second floor balcony. While he has been seen the most, no one knows his full story.

One of the better known Florida haunted places is Umatilla Cemetery. Located just outside of Umatilla, many visitors have heard a variety of unsettling noises and local rumor says that the spirits in this haunted cemetery are anything but friendly. People have reported hearing a woman scream or calling for help. Others have said they felt like they were being watched. It seems that while there is very strong activity at this cemetery, it is perhaps limited to just one or two spirits although local town talk credits quite a few apparitions.

Sunland, also known as Sunnyland, was originally a hospital for those with tuberculosis. It was converted into a hospital for the mentally insane and then later a hospital for the severely handicapped. Reports are that the hospital was horrible in every sense of the word. Lack of appropriate patient care, overcrowding, filthy accommodations, and immoral orderlies were all common. The hospital was closed in 1985, and it was finally torn down in 1999. Today, there is a park with a playground where the hospital once stood. Perhaps a playground is fitting since it seems that the spirits that reside here are mostly children. People report seeing apparitions at night and some people even report smelling the aroma of roses.

The lighthouse in Saint Augustine looks innocent, but its picture-perfect exterior belies the truth that lies within: the lighthouse is one of Florida's most haunted places. It was built in 1874 with the lighthouse keeper's cottage added a few years later. The lighthouse is reportedly haunted by a few of its keepers, as well as children who died in an accident on the grounds. In the lighthouse, locked doors unlock themselves, and furniture moves without anyone touching it. 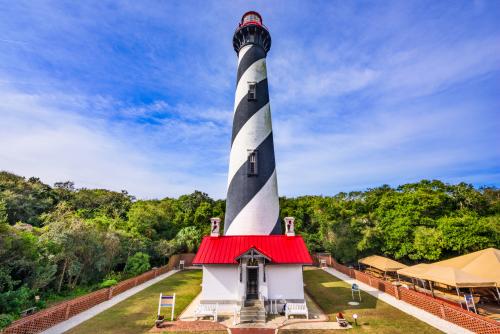 The Old Courthouse in Bartow, Florida has certainly seen and heard its share of interesting history. Many people have heard a man scream from the basement. Supposedly, it is the spirit of a man who died in an explosion there. There are also tales of two male spirits. These are the Mann brothers who were lynched by a mob for committing murder and their bodies put on display at the Old Courthouse. There is also a roomful of ancient Indian artifacts. People visiting this room have reported feeling as if someone is brushing up against them. Workers say that things are moved and electrical equipment mysteriously stops working and then suddenly begins functioning normally. No one has an explanation for this phenomenon.

If you're looking for a haunted place to stay when you're in Miami, why not book a room at the Biltmore Hotel Miami Coral Gables? The site wasn't always a luxury resort hotel. Built in 1926 and now on the National Register of Historic Places, the hotel served as military hospital during World War II, and then a medical school until 1968. After the medical school left, it became abandoned property that locals snuck into. Many left with ghostly tales. In the 80s, Biltmore took over the property and turned it into one of Miami's finest luxury hotels, but the ghosts have remained. Ghost sightings include mobsters in the Everglade Suite on the 13th floor, reportedly the ghost Thomas "Fatty" Wash, who was gunned down in the suite in 1929 during a gambling dispute.

Haunting and History in the Sunshine State

Florida has a long and storied history and is home to many historic properties. No matter where you are in the Sunshine State, you're sure to find haunted places you can visit. From conquistadors to mobsters, Florida's ghosts are there waiting to be discovered by those who dare.