Haunted places in Texas share a rich and colorful history of ghosts and paranormal activity. Locations of tragedy, dastardly deeds and deadly gunfights are conjure up spooky tall tales of restless spirits.

One of the best-known Texas locations is The Alamo. The Battle of the Alamo was a crushing blow to San Antonians. Originally a mission to train "uncivilized" Native Americans in Christianity. The Alamo later became a fort that was invaded by Santa Anna's armies. The soldiers that were killed, dismembered, looted and then buried in a mass grave.

There are numerous ghost stories at the site. The first report occurred in 1836 when Santa Anna sent soldiers back to the fort to burn down the church and prevent it from becoming a Texan shrine. His soldiers returned claiming guards with flaming sword had surrounded them. When Santa Anna sent his General with another detail, they saw a white spectre with balls of fire in his hands and fled in terror. Many visitors have seen sentries standing guarding around the fort. Other ghostly apparitions include:

The Alamo is a state historic site and is open to visitors. If you can't visit in person, you can take the virtual tour on the website minus the ghosts. 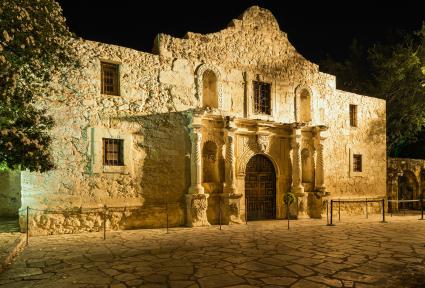 The rich history of the Magnolia Hotel began with Texas Ranger James Campbell as a two-room log cabin. The cabin was sold after Comanches ambushed the ranger. It was used as the first stagecoach station and hotel. It underwent various transformations and conflicts with Comanches as the hotel expanded over the decades. It was abandoned in the 1990s and renovation began in 2013 despite the continuous paranormal activity.

The Texas State Capitol is on the National Register of Historic Places and designated as a National Historic Landmark. The majestic domed building had humble beginnings as a two-room log cabin with a small meeting room.

Over the past decades, several ghosts have taken up residence in the Capitol building. Eyewitnesses have reported seen a Lady in Red wandering about the third floor. Another regular apparition is top hat wearing Robert Marshall Love. The state comptroller was shot what sitting at his desk in his Capitol office. It's not known why the former employee shot Love. The ghosts don't just haunt the State Capitol, seems they also like the Governor's Mansion. In fact, many of the former governors love the mansion so much, they decided to stick around after death. Sam Houston is one of the former governors haunting the mansion.

You can visit the Texas State Capitol by participating in a tour, guided tour or call to set up a group tour. You may just bump into one of the resident ghosts. 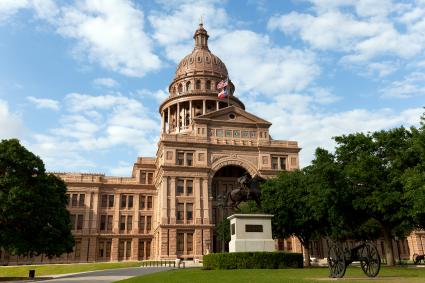 Shafter Lake is now a ghost town. Its original name was Salt Lake, but today is a dried up salt bed. The town was abandoned when Andrews was chosen over it for the county seat. Many locals have reported that on fall nights you can see a small army of soldiers on their horses galloping across the dried-up lake. Some say that it is General Shafter and his men as they were attempting to escape certain death at the hands of pursuing Comanche warriors. The salt bed attracts other apparitions, such as the Lady in White often seen walking across the salt bed.

Closed in 1972, the Baker Hotel has several ghosts still waiting for the doors to be opened once more. The hotel is listed on the National Register of Historic Places but is closed to the public. Fundraising for renovations began in 2015.

It's believed the ghosts of Bonnie and Clyde hide out in the hotel. Some eyewitnesses claim to have seen the infamous couple. Other resident ghosts include a Woman in White believed to be the spirit of the owner's mistress. It's rumored she committed suicide by leaping from the seventh floor window. A bellboy who met an ill fate being sliced in two by a malfunctioning elevator is said to roam the hotel.

Currently, the hotel is closed to the public. While some ghost tours skirt the hotel, no one is allowed inside the building.

The Hotel Galvez was built in 1911 and is on the National Register of Historic Places. Named for the city's namesake, the Bernardo de Gálvez, it is a functioning hotel.

The hotel is rumored to be haunted. Guests have told stories of seeing the Lovelorn Lady wandering the fifth floor of the hotel. Room 505 is said to have the pungent sweet smell of gardenias. Many stories surround the room and the Lovelorn Lady who is still waiting for her husband who died at sea. Another ghost story tells how she hanged herself in Room 505 when she learned her husband was lost at sea.

The Hotel Galvez is an operating business. The only way to visit the hotel would be as a hotel guest. 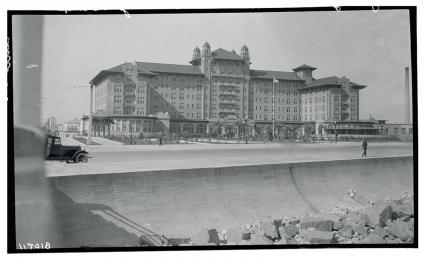 The Granbury Opera House is a registered historic landmark. In 2012, the building was renovated into a state-of-the-art theater. Off-Broadway productions are held in the renovated building.

The story of the tall apparition dressed in black and wearing black boots is a bizarre tale. The ghost is said to be that John Wilkes Booth. Yes, the man who killed President Abraham Lincoln apparently escaped to Granbury, changed his name to John St. Helen and lived out his days there. This anomaly in history is explained with the tale that the man killed in the barn in Virginia was a look alike actor and not the infamous murderer of President Lincoln. As ghostly evidence, Ghost Lab, a Discovery Channel show, captured an EVP (Electronic Voice Phenomenon) of a man's voice claiming to be Booth.

You can visit the Granbury Opera House by attending one of the productions. There is no information about the building being haunted or allowing paranormal investigations.

The Grove is often said to be one of the most haunted houses in America. It's also known as the Stilley-Young House and is listed as a Texas Historic Landmark and is on the National Register of Historic Places. The first owner of the property was Frank Stilley and subsequently had other owners including the Young family and the Grove family.

The Grove Is Haunted

The numerous stories of the different types of paranormal activity on the premises have attracted a lot of attention, including William Shatner's former show, Weird and What? As well as being featured in numerous magazines. Stories of murders and secret graves underneath the house have plagued The Grove. Some of the strange activities include:

While The Grove is a private residence, it is also a tour home. You can visit The Grove and participate in a tour. Many people report having a paranormal experience or encounter while on the tour.

Many Texas Haunted Places to Explore

Texas is overflowing with tales of ghosts and stories of haunted places. You can explore many of these locations and perhaps catch a glimpse of the other side.