A hominid is any member of the Hominidae (great apes) biological family, extinct or extant. This includes humans, chimpanzees, gorillas, orangutans, and monkeys. When researchers refer to a hominid as being cryptid, they are talking about a species of hominid that is either unknown or one that is considered extinct. All around the world, there are tales of hairy, giant wild men that roam the vast stretches of unpopulated forests. From Northern California to Peru and from Russia to East Asia, hundreds of thousands of reports have been filed concerning encounters with hominid cryptids.

Otherwise known as Bigfoot, the Sasquatch is a massive, ape-like, bipedal humanoid that is believed to roam the Pacific Northwest region of North America, although sightings have been reported in virtually every state. The creature is reported to be between six and ten feet tall, weighs over 500 pounds and is covered in a thick, matted layer of dark brown or reddish hair. 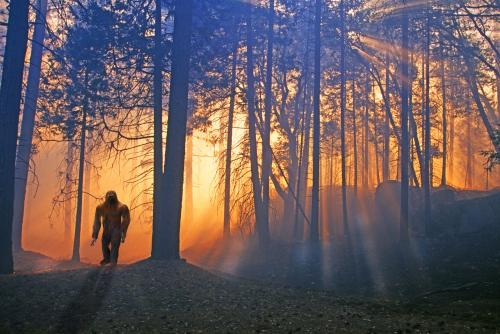 This small, bipedal hominid cryptid is believed to inhabit the island of Sumatra (Indonesia). Supposedly seen and documented for over 100 years by the local tribes and countrymen, the Orang Pendek is one of the shortest cryptids since it's said to stand between 30 to 60 inches tall. It is supposedly covered in short hair that ranges from gray to brown. It has very broad shoulders, a huge chest and extremely powerful arms.

Also known as Meh-Teh, the Yeti is said to inhabit the Himalayan region of Nepal, India and Tibet. Considered by many cryptozooligists to be a direct relative of Sasquatch in the United States, scientist have speculated that the Yeti might be anything from the endangered Himalayan brown bear to a present-day species of the extinct giant ape, Gigantopithecus.

Australia's Bigfoot or Yeti is known as the Yowie. This hominid cryptid is a common staple found in Aboriginal folklore. The Yowie is considered to be about five feet tall and is often referred to as being the original inhabitant of the country.

The south's version of Bigfoot, the skunk ape or stink ape, is known for its swampy sulfuric aroma. This upright, hairy creature was sighted repeatedly during the 1960s and 1970s in the Southern swamps of Florida and Louisiana.

In the late 1980s and early 1990s, there was a plethora of sightings in rural Wisconsin of a large, bear-like or wolf-like creature that was capable of standing and walking on its hind legs. The subject of many articles and books, the Beast of Bray Road is often referred to as being a werewolf. Many witnesses of the beast took lie detector tests that indicated they weren't lying when they described their encounters with these hominid cryptids.

Sightings of hominid cryptids are reported all across the globe, and many of these sightings have no scientific explanation. Additional examples of these mysterious creatures include the following.

First sighted in 1937, the Agogwe is reported to be a 4 to 5 foot rusty-haired bipedal cryptid.

This bipedal creature from the Pilippines is said to have long nails, walk on two legs, and look like a hairy man. Some have credited Amomongo with disemboweling livestock in the Philippines.

The subject of a 1980 Hindi movie, Ban-Manush (also Nyalmo) is a 20-foot tall hairy, bipedal creature that appears in Bangladeshi folklore.

If you visit Chitral and Karakoram Ranges of the Himalayas, you may hear tales of Barmanou, a mountain hominid similar to Bigfoot or the Yeti.

Is Bukit Timnah an actual creature or a figment of the imagination created from Malay folklore? Sightings of the monkey man, which has an appearance similar to Orang Pendek, have been reported since the early 1800s in the Bukit Timnah region of Singapore.

The Russian hominid cryptid Chuchunya reportedly lives in Siberia and is about 7 feet tall with lots of coarse hair.

First sighted in Dover, MA in 1977, the Dover Demon is said to walk on two legs. It has large eyes and fingers like tentacles. All Dover Demon sightings were reported by teenagers during a period of about a week in the same area.

Also known as the Boggy Creek Monster, the Fouke Monster makes the Sulphur River Bottoms of Southern Arkansas its home. Many people have spotted the monster, which has an appearance similar to Bigfoot or Skunk Ape.

Spotted along the back roads of Beltsville, MD, the Goatman is half human, half goat. Urban legends suggest he is the product of a science experiment at a nearby university gone terribly awry.

Japan has its own Bigfoot sightings in the form of the Hibagon. Sightings of the biped, which looks like a bristly-haired gorilla, have been reported since the 1970s.

These shape shifting bipedal creatures come from Tsimshian and Tlingit folklore. These shapeshifters can assume bipedal forms or become any other creature they wish, according to legend.

These ape-like bipeds are said to inhabit South America's jungles. People have been reporting encounters since the turn of the 20th century.

If you visit Nahanni National Park Reserve in Canada's Northwest Territories, you may just encounter Nuk-luk, a 5-foot tall, stocky, hairy biped. People have reported sightings since the early 1960s.

Also known as the Chinese Wildman, this bipedal creature has been spotted hundreds of times in the forests of western Hubei in China.

Evidence of Existence of Bipedal Cryptids

Over the years, people have found everything from photographs and unrecognized footprints to strange hair and scat samples they put forth as evidence to prove the existence of these and other hominid species. While many test results came up inconclusive or unanswerable, there has always been enough evidence to make many respected scientists continue the search.