Explore the spiritual meanings of common colors for various purposes. You can use these colors to enhance your meditation practice, home décor or make fashion choices.

Common Spiritual Meaning of Primary Colors in the Bible

The three primary colors are red, yellow and blue. You can choose one or more to boost your own spiritual energy.

Red is the color of blood and for the Church represents Jesus, the Christ and his ultimate sacrifice. It isn't surprising that the Church uses red as its official color.

Yellow and its variation of gold is considered a divine color that represents God. The holiness and majesty of divinity are found in yellow and specifically the color and metal of gold.

Blue is the color that represents heaven. This sky color also represents the Holy Spirit and truth. It is used in cleric robes. The Virgin Mary is often depicted wearing blue. 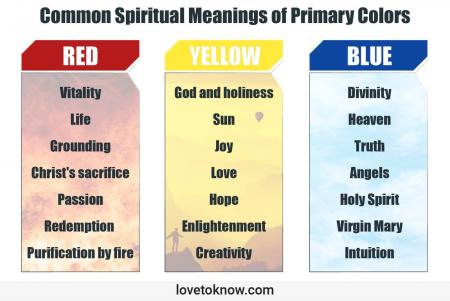 Secondary colors are created when two primary colors are mixed together. They produce three more colors that also have spiritual meanings.

In the Bible, cedars (evergreen trees) were used in purification rites. Green is created by combining yellow (God) and blue (heaven). Christianity recognizes green as the color of immortality through the defeat of death by Christ.

Orange is considered the color of fire. Just as the burning bush was of the presence of God, so is fire and the power it wields. 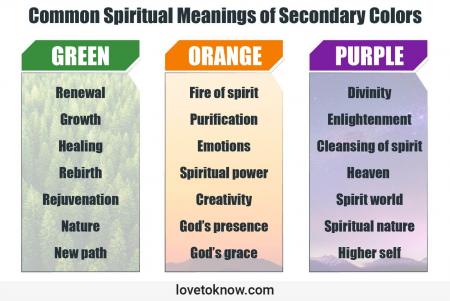 Other Spiritual Meanings of Primary Colors

There are other common religious and spiritual meanings for primary colors. Some are based on the chakra systems, while other are a hybrid between various religions and belief systems.

Red is considered the color of intense passion that is often found in those first discovering their spirituality. Modern spiritual meanings take into account the range of the color from bright red to pale magenta, especially when it comes to reading auras. The vibrational quality of red is powerful and can overwhelm people with its brilliance.

Yellow is the color of joy, love, hope, and creativity. When seen in auras, yellow is a highly positive color that is expressed by someone who feels free and has divinely inspired spiritual values by which they live. Yellow is the color of celebration of divine love and the job discovered within the higher realms of spirituality.

Blue is the color that ties humans to the divine realms. It's like an umbilical cord that allows communion between human life and those of the divine spirit world. Blue auras are often seen in people called to be healers, intuitives, psychics, and mediums.

Other Spiritual Meanings of Secondary Colors

Just as the Bible and other religious texts refer to orange as a color of fire, in modern spirituality, it is often the color of the process of purification, such as going through the fire. Just as an orange aura reveals a powerful, risk-taking, emotional nature on a spiritual level, so can it with a spiritual nature. This highly charged color vibration can represent a newly discovered spirituality that is undisciplined.

Purple is a color of divinity and represents enlightenment. Purple is also the color of cleansing of spirit and the connection with heaven or spirit world. In an aura, purple reveals a highly developed spiritual nature.

Spiritual Meanings of White and Black

The spiritual meanings of white and black are often the same throughout various religions and beliefs. Each one has specific spiritual attributes.

White is typically revered as the color of purity and considered a holy color. White clothing is donned on holy days. Christians wear white for confirmations since the color is one of purity and innocence. In other religious and spiritual traditions, white is considered a color of redemption and rebirth. It is rare that a person has a white aura since this color vibration is that of angelic beings.

Black is considered a negative spiritual color. It is associated with dark and evil forces. Biblical depictions of hell are given as being black and full of darkness. A black aura often indicates a spiritual conflict or battle the individual is undergoing that can manifest in a physical or emotional illness.

Interpreting the Spiritual Meanings of Primary and Secondary Colors

There are many spiritual meanings of primary and secondary colors. Many of these meanings are the same throughout various religious and modern spirituality practices.