You won't find a hedge witch in a coven since this magic practice is solitary. A hedge witch works with nature and understands how all life is connected.

What Is the History of a Hedge Witch Practice?

A hedge witch, traditionally a woman, lived outside the village on the other side of the hedgerow that bordered the village. When the land for a village was cleared, a thick dense hedge was made of the cleared timber and bramble, so plants would grow over it. The hedge protected the village from wild animals and raids from marauders.

The hedge marked an in-between space or buffer and every hedge witch knows that in-between places always contain magic, especially at sunrise and sunset! This was the ideal place for a hedge witch to live and practice shamanistic magic and other forms of magic, such as earth magic. This location was convenient for the townsfolk, so they had easy access to the witch for various herbal healings, potions and even spells.

A hedge witch follows the ancient tradition of solitary practice that existed long before the 20th century Wicca and the creation of covens in 1921. She isn't restricted by rules, guidelines or dogmas. Like all solitary practitioners, she creates her own form of magic. Traditional hedge witchcraft carries out a generational tradition of herbal knowledge and cures specific to her ancestral practices. These cures are created to treat medicinal ailments and spiritual infirmaries. 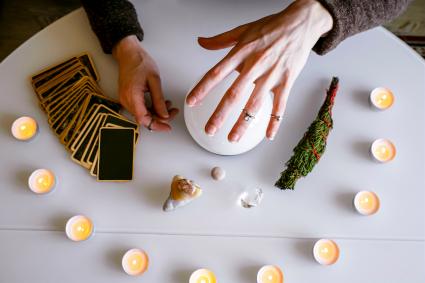 A hedge witch is an independent herbal practitioner. She has her own belief system and doesn't conform to that of covens or any other witchcraft practices. She may worship nature, a goddess or God. Her spirituality belongs solely to her and is a vital part of her magic practice.

A Hedge Rider is another name often used to describe a hedge witch since she moves between the spirit and earthly worlds with ease. This is traditionally done through various divinations and trance work.

A hedge witch is said to be flying the hedge when she goes into her altered state of being and travels into the spirit world. Hedge witches were mostly women who were the head of their households. One of the most common cleaning tools was the broom. The idea of flying the hedge morphed into the hedge witch physically flying via her household broom instead of her spiritual journey.

The hedge witch uses various herbs, concoctions and flying ointments. The flying ointment dates from just before the Dark Ages. It became a prominent salve that hedge witches used to obtain the altered state of consciousness to travel (fly) to the spirit world. The different flying ointment recipes were made from rendered animal fat and various hallucinogenic herbs and plants.

A hedge witch has an arsenal of herbal teas, tinctures, salves, ointments, and incense sticks from her garden. Basil, sage, rosemary, lavender, and less known herbs are part of this herbal medicine cabinet. A hedge witch uses herbs in combinations with various woodland objects and folk magic. Each authentic hedge witch has a customized magical practice that includes herbal recipes and uses. 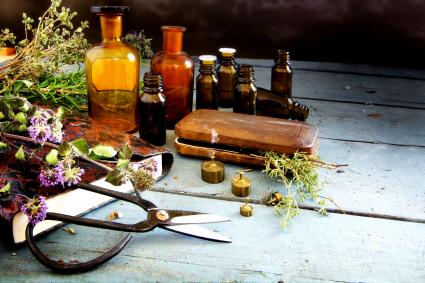 A hedge witch was trained by her mother, grandmother or other relative knowledgeable in the family practice. However, if you aren't from an ancestral practice, there are some ways you can train to be a hedge witch. While most hedge witches have traditionally been women, some men practice as a hedge witch.

Create Your Own Solitary Practice

As with all solitary practices, you will develop your own form of magic that may include folklore magic. You can experiment to decide which ones you're comfortable using. You can incorporate any kind of magic you prefer, such as candle spells.

Many newbies to hedge witch practices are surprised that hedge witches have practiced different forms of meditation for centuries. Meditation is one of the easiest way to connect with your higher self to regain forgotten knowledge, tap into information hidden from this world and converse with the spirit world. 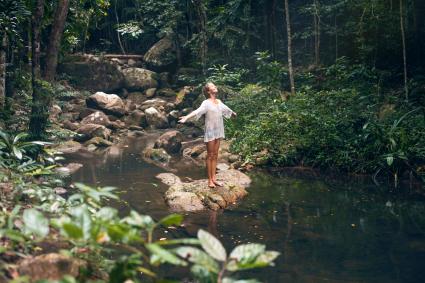 Modern forms of healing can be incorporated in a hedge witch's repertoire, such as energy healing, holistic and alternative medicine. Some website offer coursework with diplomas, although traditionally, such credentials were never required, but may bear more weight in some social circles.

The most common difference pointed out between a green witch and hedge witch is how the green witch works with nature spirits to perform healings and divinations. The Green Witch has a strong connection with plant and tree spirits, water sprites and various elementals. She/he is assisted by their animal spirit guides.

Like a hedge witch, a green witch creates her/his own rituals and magic and takes advantage of objects found in nature, such as rocks, crystals, wood, plants, and other living matter. A green witch grows food and herbs while living in harmony with all of nature.

A hedge witch is an ancient form of witchcraft that remains in its truest form of solitary practice. You will grow as a magical being when you learn through personal trial and error to become an accomplished hedge witch.

0
Comments
© 2006-2020 LoveToKnow, Corp., except where otherwise noted. All Rights Reserved.
Resources, Advice & Tips for Covid-19
Read More
What Is a Hedge Witch? History, Practices, and Training