Defining what white magic is can help you understand how to use it. While it is believed that practitioners call upon supernatural powers, white magic is used primarily for selfless purposes.

Understanding What White Magic Is

Many white magic practitioners are self-proclaimed healers and intuitives. They are often called white witches or white wizards, along with other numerous titles used to distinguish themselves from black magic practitioners. Some critics believe the term white magic is a modern term used for various self-promotion and self-aggrandization, which are in direct opposition of the intentions of white magic.

The roots of white magic are obscured. However, it's believed to be a practice of antiquity that long preceded ancient Egypt. Some practitioners believe white magic was the first form of human worship, such as the gods and goddesses of fertility and harvest. Whatever the origins, modern white magic is a nature-based form of magic. In his book A History of White Magic, renowned occultist expert/author Gareth Knight writes that when Rome fell, the eventual recovery from the Dark Ages resulted in white magic being fragmented and obscured.

Today, there is a large population of white magic practitioners who are heirs to a long lineage of white magic workers. These families know and practice white magic. They possess an accumulative knowledge that their ancestors protected and passed down through each generation.

Along with this family tradition, it is believed that certain types of power are also passed down from one generation to another. This can be finely tuned psychic abilities, mediumship and a large range of similar intuitive gifts. Some families have compiled a grimoire over several generations. This book of incantations and magic spells is passed on to the next generation of white magic practitioners or white mages.

Power of a Grimoire

The power of a grimoire is in the spells that have been entered into the book, having been used by their ancestors. The creation of the spells themselves imbues a certain amount of magic into the work.

Tapping Into the Powerful Family Grimoire

Practitioners are able to tap into the energy and power of their ancestors when they repeat these magical spells and incantations. They add their own energy to each one that future generations can tap into and bolster with their own energy. This is the true value of a family grimoire!

Along with natural psychic gifts, white magic workers use various magic tools in their practices. These can include things like charms, talismans, amulets, spells, incantations, chants, songs, sigils, and other types of magic tools. Healings are also part of white magic sacred work.

What Is the Difference Between White Magic and Black Magic?

White magic is the opposite of black magic. Unlike the dark arts, white magic has its roots in nature and the ancient practice of nature worship. A benevolent pagan practice, white magic is a natural magic. It focuses on tapping into the balanced energies found in nature, the beauty of the natural world and the healing properties nature provides.

Black magic is often considered a malevolent and selfish practice by white magic workers. White mages believe in the pursuit of selflessness while they believe black magic practitioners are focused on selfishness and personal gains.

Black magic workers conduct their spells and other work to achieve personal and selfish gains and advancement. In its malevolent form, black magic destroys and is often used as a tool of revenge and hate. Black magic dominates the free will of others to bend it to the practitioner's will.

White magic takes the higher road of the human psyche with tenants of goodness, kindness and respect of others and their free will. White magic spellwork isn't used for self-gratification or advancement. White magic practitioners respect all life and desire to be of service to others and the world at large through their knowledge of magic, herbs and the bounties that the natural world offers.

White magic spells can be cast by adepts, but if you've never done any spellwork, you should rely on a white mage to assist you or perform the spell for you. There are professional white witches, wizards, magicians, mages, and other who cast spells for others for a fee. 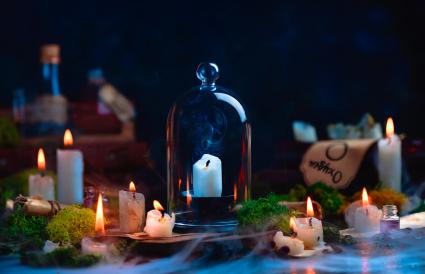 One of the most popular white magic spells is a love spell. In white magic, love spells aren't cast to break up couples so you can be with one of them or bend a love interest's will to force him/her to love you. Instead, a white magic spell puts out a call to the universe to assist you in connecting with a true mate. As long as you approach this type of spell with this mindset, you should have good results from your spellwork.

A pink candle love spell can be cast to attract a love interest. The spell announces to the universe that you are ready for the right partner to share your life with.

White candle spells for love are ideal since white candles are considered magical. A white candle love spell can open the various energy channels so someone with similar energies to yours will be attracted to you.

There are all kinds of money spells and abundance spells you can cast to attract money to you. This type of spell requires a green candle and sometimes specific herbs and/or essential oils.

How to Use Your White Magic Knowledge

White magic is the benevolent side of magic. The main thing to remember when it comes to magic is intent. It's your intent that defines whether you are performing white magic or black magic.