A soul can reincarnate into the same family. There have been many cases of children recognizing former family members from photos, often identifying themselves in family portraits.

Does Reincarnation Stay Within the Same Family?

There are two terms used by reincarnation research to describe this type of reincarnation; they are group reincarnation and group karma. It's widely believed that the same group of people reincarnate together either as blood relatives or marry into the family to rejoin it.

Pregnant After Death in Family Reincarnation

Another phenomenon is a pregnancy after the death in a family. Souls often return immediately upon the death of their physical bodies in an effort to attend to unfinished business. A family may experience the loss of a loved one only to have a family member discover she is pregnant. This phenomenon happens frequently in a family that participates group reincarnation.

Author Sally Painter explains how this happened in her family. "My grandmother died five years after my grandfather. Within a couple of months of her death, after years of no luck, I became pregnant and my cousin also became pregnant. Surprisingly, we had the same due date! She gave birth to a boy, and I had a girl. Both children had distinguishing physical markings that their great-grandfather and great-grandmother had developed during their adult lives that weren't hereditary."

The roles within a family can change when deceased members return. You may have been your uncle in a previous life or you may return a different gender than your previous incarnation. 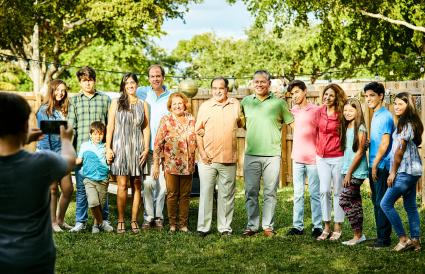 My Dad Reincarnated As My Son

Children often tell parents about their past incarnations. In the case of an 18-month-old boy named Sam, he claimed to have been his grandfather. While Sam's father was changing the child's diaper, Sam announce he'd changed his father's diapers. He went on to tel how he'd been the father in his past live. Sam went on to identify himself in family photos as the grandfather he'd never met or seen in a photo.

Dr. Ian Stevenson spent his career investigating such cases. His reincarnation research led him to India and other regions of the world to interview children claiming to have past life recall. In one of his many books, Children Who Remember Previous Lives: A Question of Reincarnation, Dr. Stevenson summarized his 40 years of interviewing and researching children claiming to recall past lives. He observed:

After children reach a certain age, usually around seven or eight years old, they forget their past incarnations. What's referred to as the veil of forgetfulness is believed to be thin enough when the soul first returns to recall past lives. As the child ages, that connection with the other side and past lives weakens, and the veil is no long transparent and separates the child from their past.

Theories on Why the Veil of Forgetfulness Exists

There are many theories about why a person doesn't usually recall their past lives. The most widely accepted reason is the memories of many lives, the emotions and pain would overwhelm most individuals and could easily cause insanity. The confusion this blood of memories and thought would negatively impact your daily life.

Another reason is being able to accept your new role and family dynamics. It would be very difficult to treat your parents as authoritative figures if you recalled being their grandparent or sibling. Compound that with any conscious conflicts and the purpose of returning to fulfill life lessons would be lost.

How Long Does It Take For A Soul To Reincarnate?

The time it takes for a soul to reincarnate is believed to hinge on several factors. The first is a willing vessel to serve as mother to the soul. The other is often a matter of soul preparation for another lifetime. According to Dr. Jim Tucker of the University of Virginia, the time interval between incarnations is an average of four and half years with a mean interval of 16 months.

Past Life Regressions and Spontaneous Recall

The waiting time between incarnations has been explained through past life regressions and children having spontaneous recalls. The process of reconciliation that your life is over, and a new one is starting requires soul work.

Guides work with the deceased to plan the next step in that soul's spiritual evolution. It may not be good timing for the soul to return immediately to its family of souls still on Earth. There may be other factors such as family members needing to fulfill their karmic obligations without that soul's support. Reincarnation of the soul could be negatively impacted if the soul returned.

How Many Times Do We Reincarnate?

There isn't an exact number of times that a person must or can reincarnate. The determining factor is the individual soul's spiritual growth. At the time of death, when the soul is greeted by their guides, the next step is discussed thoroughly. It's believed that more evolved souls earn the right of self-determination when it comes to their next incarnation.

In such cases, the ties that soul has to its soul family may be too strong to move to the next level of soul growth. This type of loyalty and devotion can create problems, entrapping souls in an endless cycle of reincarnation.

Signs of Reincarnation in Babies

Babies often exhibit what family members often consider to be clues or signs that a deceased family member has reincarnated and rejoined the family. Many of these first signs are seen in physical attributes that the deceased relative had. 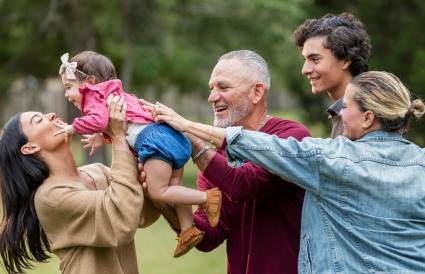 A baby may be content with a family member but grow upset around another one. Some people believe this can be and indicator of past life recall of a conflict experienced in the last incarnation. The person the baby is content with might be the child's mother or wife in the last life. The one the infant doesn't like might be the result of past life sibling rivalry or worse.

Siblings that died during childhood have been documented as returning as a child of their sibling. In some other cases, the soul of a dead sibling returns quickly as a new sibling in the same family, having decided to return to their parents.

Family Is Where You Learn the Most Difficult Lessons

The old saying that you suffer the most karma with families is believed to be a truism. Families offer the widest range of dynamics and personalities that can test your spiritual mettle and help you grow and advance. Not recalling your past lives together makes meeting your karma within the family dynamic a true test of your soul's desire to grow spiritually.

Your Soul Can Reincarnate Into the Same Family

Once you've met all your karmic debt within a family circle, you may decide it is time to advance beyond an Earthly incarnation. You may choose to venture into other worlds or dimensions in search of your next spiritual challenges and growth.

0
Comments
© 2006-2020 LoveToKnow, Corp., except where otherwise noted. All Rights Reserved.
Resources, Advice & Tips for Covid-19
Read More
Can a Soul Reincarnate Into the Same Family?