Sightings of cigar-shaped UFOs are part of the mysteries and unanswered questions that surround these events. One of the oldest cigar-shaped UFO events occurred in 1897.

One of the least reported but most profound cigar-shaped UFO incident happened in Aurora, Texas in 1897 with one victim reported- the pilot. The wreckage was combed through by many of the townspeople.

An article featured in The Dallas Morning News written by SE Haydon, describes the UFO crash. On the morning of April 19, 1897 at six o'clock, the town was startled when a cigar-shaped UFO was spotted in a low descent. The account reads as though the UFO had been previously seen, stating that morning the airship was, "much nearer the earth than ever before." 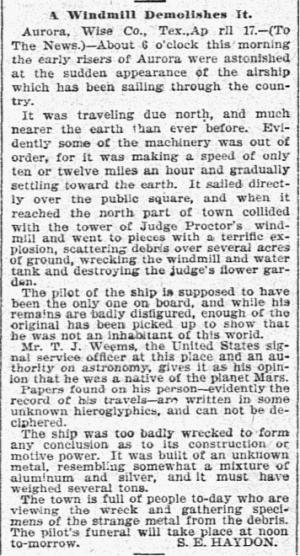 The craft, referred to as an airship, flew directly over the public square then crashed into Judge Proctor's windmill tower, which was located in the northern part of town. Upon impact, the UFO exploded, scattering debris over several acres.

The article goes on to describe how the remains of the pilot were quickly identified as, "not an inhabitant of this world." In fact, the local US Signal Service Officer, TJ Weems, declared the pilot was from Mars!

Among the remains of the crash, it was reported that the pilot had logged his journey, but the entries were of strange unidentified hieroglyphics. The explosion left no discernible evidence of an engine or other machinery/equipment. The article describes how residents collected pieces of metal that was a combination of aluminum and silver.

The town held a funeral for the pilot the following day and the body was interned in the town cemetery, marked only with a rock. The rock was removed sometime later, and the exact location of the grave is said to be unknown.

October of 2017, an enormous cigar-shaped object was detected on its path toward the sun by the Panoramic Survey Telescope and Rapid Response System-1 (Pan-STARRS-1) in Hawaii. Taken by surprise, scientists struggled to determine what the oddly shaped object was as it tumbled closer.

All kinds of speculation electrified the Internet. The object named 'Oumuamua, which is Hawaiian and means "scout or visitor from afar arriving first". Many UFO theorist speculated that the cigar-shaped object was an alien scout ship or mother ship. Ultimately, scientists concluded it was a comet, albeit not a typical one. Still other scientists speculated it was something else, such as an ancient remnant of a comet or asteroid. A few facts about the 'Oumuamua include:

In September 2019, a pilot flying a private jet over Utah at 40,000 feet filed a report with MUFON (Mutual UFO Network) accompanied by a video of a white cigar-shaped UFO. The video reveals a cigar-shaped UFO moving at a sustained moderate speed below the pilot's aircraft.

After viewing the video, Metabunk, West Mick used the original video on MUFON's website to get the timestamp and GPS location of the private plane. Using this information, he was able to ascertain the UFO was actually a United Airlines plane. He published the flight number as well as how high the United flight was traveling in its descent to the Las Vegas airport.

In 2016, documentary filmmakers, Sam Chortek and Jimmy Chappie were shooting footage for a film a few miles outside of Beaver, Utah. Using a drone, the two men and the drone operator were approximately 400-500 feet away from drone. Later that night upon reviewing the day's footage, they discovered the UFO. The three men had not heard or seen anything during the filming. Doing a little research on the region, they estimated the object traveled 3.5 miles in one second.

National UFO Reporting Center (NUFORC) database has hundreds of reports of cigar-shaped UFOs dating from the 1897 crash to present day. Most of the reports have a link that takes you to a page that gives details about the incident.

In 2016, a 73-year-old male reported to NUFORC how he witnessed cigar-shaped UFOs at his job at Vandenberg AFB in California during various Atlas D missiles launches between 1965 and 1978. He watched many of these launches using "Big Eye', a 4400mm telescope and the Range Camera data at Building 7000. His report with NUFORC states, "While viewing some of the launch films, it was quite common to see UFO activity paralleling the flight."

The witnesses states the UFOs would catch the missile exhaust tail and track with the missile. The UFOs would then speed up to pace beside the missiles before speeding away at very fast speeds. He points out their radars could track up to 10,500 m/h speeds but were unable to track the UFOs' speeds that exceeded that maximum tracking speed.

A report was made in 2013 about a 1971 incident with a large cigar-shaped UFO in the Philippine Sea was made by a former seaman who was on board the USS Bronstein DE-1037 ship headed toward North Vietnam. The ship had moved away from the carrier when the port lookout shouted something was hovering above the water

The eyewitness stated he observed the UFO through the Big Eyes, which are three-foot-long binoculars capable of a range of 18 miles. He said the UFO that looked like a dirigible in shape. The man described how a white cloud encased the middle of the cigar-shaped object.

As the USS Bronstein got closer to the object that was hovering above the water parallel to the ship. The eyewitness claimed the UFO was a mother ship. The object suddenly disappeared as soon as the lookout radioed the bridge.

The man reported the UFO left a round shape of rainbow colors in its wake. He claims naval officers filmed it with 8mm cameras. The round rainbow colors dissipated after 20 minutes. He adds that no one was debriefed. In retrospect, he was baffled that no one on the ship spoke about the incident, including him. 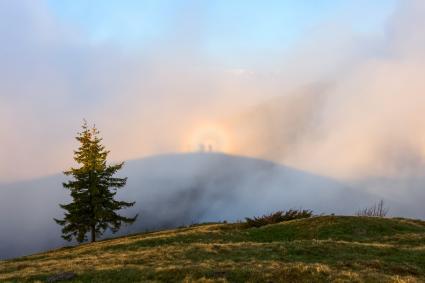 On January 29, 2020, an eyewitness reported to NUFORC a cigar-shaped UFO was the third one he'd seen in his area of Littleton, Colorado. This time, he witnessed a contrail and noticed a glint from a metal craft in a clear blue sky. He stated it was possibly two times larger than an airplane. He watched the cigar-shaped UFO travel beside the contrail then make an abrupt turn and slowly move away eventually disappearing.