Famous sightings of a V-shaped UFO had multiple witnesses and eyewitness videos. Years after these sightings, researchers still debate what these objects were and more importantly, where they came from.

The UFO sighting on March 13, 1997 became the most witnessed one in modern history. It's believed this UFO traveled over 300 miles at a steady pace. Eyewitnesses in Phoenix, Arizona, reported seeing six attached or stationary lights as part of a much larger V-shaped object that was difficult to discern against the night sky. However, there were some witnesses who saw the object earlier during the afternoon and described it was a V-shaped UFO with round ends.

The Arizona Governor Fife Symington didn't attempt to find answers for his state and the people concerned about what they'd witnessed. His response was to dress up his chief of staff in a Grey alien costume and parade him in front of the press. His goal was to diffuse the growing panic, but instead his antics infuriated witnesses who felt insulted and that they were being minimized and ridiculed. After he was out of office, Symington confessed his response wasn't appropriate.

In a 2014 candid interview with Fox 10 Phoenix in 2014, Governor Symington admitted he jumped in his car and drove so he could see what was going on. He described seeing a UFO that was breathtaking and not of this world.

UFO as Big as Battleship Carrier

A former Air Force pilot, Governor Symington told the reporter he saw embedded lights on the V-shaped UFO and the UFO was bigger than anything he'd ever seen in the sky. When asked if the UFO was as large as an aircraft carrier, he replied, "Yes." Symington also mentioned that an American West pilot was approaching Sky Harbor and saw the UFO and said he could have landed on it. 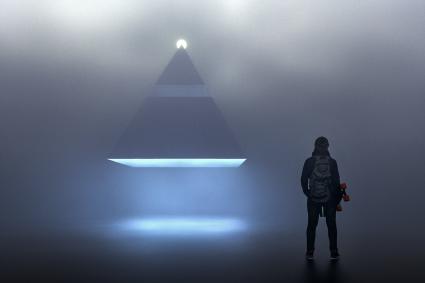 A couple of hours after the UFO passed over Phoenix, residents saw another formation of lights close to the mountain range. This time, the military claimed to be conducting a flare exercise. Eyewitnesses didn't seem convinced since there was no smoke with the first sighting and the lights appeared to be in rigid formation, unlike the flares.

Still, the media ran with the explanation that the first and second sightings were military flares. However, there were several conflicting stories about military flares from the military stating there were no planes flying after 8:30 pm and the military doesn't fly over cities, much less drop flares over populated areas. A story was circulated that a Maryland National Guard was conducting flare exercises.

In 1951 during August and September eyewitnesses reported seeing V-shaped light formations flying over Lubbock, Texas. The US Air Force issued a report claiming it had been an illusion of light reflecting off a flock of plovers, a type of bird.

At 9 pm Texas Tech University (Texas Technological College at time of sightings) professors sitting in one professor's backyard, saw approximately 15 to 30 lights flying in formation. An hour later another group of lights flew over that weren't in a formation. After reporting their UFO sightings to the Lubbock Avalanche-Journal, other eyewitnesses came forward.

Texas Tech freshman, Carl Hart, Jr saw 18-20 white light in a V formation. He rushed outside with a 35mm camera just as two more formations flew overhead. He captured five photos and sold them to the Lubbock Avalanche-Journal. The photos eventually made it to Life magazine.

Convinced they could determine what they'd seen, the professors, joined by others, sat in the front yard of one professor. That night they witnessed around 15 green-blue lights the size of dinner plates. The professors ruled out birds based on the speed and circular nature of the lights.

The three incidences occurred in the same town within a close timeframe. However, the professors claimed the formations were semi-circle with the second sighting not having in any type of formation.

In his book, The Report on Unidentified Flying Objects by Edward J. Ruppelt, the former head of Project Blue Book, states the lights were a natural phenomenon. However, due to some kind of agreement he made with the scientist who solved the mystery to protect the researcher's identity, he states he can't reveal what it was and how he knows. Critics claim this lack of data of proof discredits Ruppelt's conclusion.

The Phoenix Lights and the Lubbock Lights are two famous UFO sightings of a V-shaped object. Each incident had multiple witnesses and explanations offered were mostly rejected by the eyewitnesses.