The green aliens began through a journalistic choice of words. The rest is history when it comes to this particular UFO mythology and the various depictions of little green men in comic books and cartoons.

One Kentucky night in August 1955, just outside of Hopkinsville, a family of 11 were terrorized by aliens later described by the press as little green men. However, the Sutton family never described the creatures that attacked them in their home as green. In fact, they described the small vicious beings as being grey. Were the Suttons the first humans to witness the Greys?

A Family Under Siege by Aliens

On August 21, 1955, the Sutton family lived on a farm in rural Kelly, Kentucky. The home lacked any modern necessities, such as a telephone, much less running water. It was reported the family didn't own any books, a television or a radio that might have stimulated their imaginations. None of the adults had been drinking and declared alcohol was forbidden in the house. 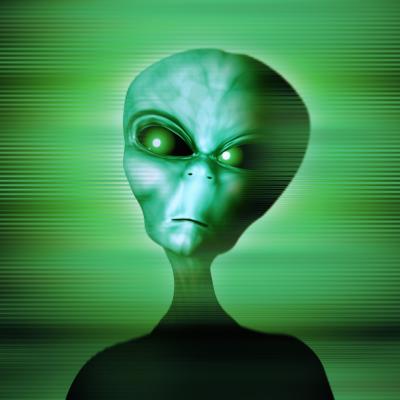 That night eight adults and three children were in the home when a UFO landed in their field and small beings emerged and attacked the Suttons. The attack lasted for several hours, with the Suttons shooting at the creatures who would do back flips and run away, appearing unharmed by the bullets.

The Suttons described the little men as being 3.5 feet tall with no neck and a round bald head. There was no visible nose and the mouth was little more than a slit. The ears were oversized and elongated in a swept back angle. The eyes glowed yellow. The torso was very muscular while the legs were sticklike. The arms extended nearly to the ground with 2-inch to 3-inch talons. The fingers were webbed around the knuckles. The body seemed to shimmer in the light reminding the witnesses of silver metal.

Suttons Escape from the Farm

The family escaped the farm around 11 pm and raced to the Hopkinsville police department. The children and women were hysterical, and an investigator reported one of them men's pulse was 140 beats per minute. Police Chief Russel Greenwell said the Suttons weren't the type of people to appear at a police station, but instead would settle matters with their guns.

In this video, the Suttons story is told by the daughter of one of the Suttons.

The phrase, Little Green Men, usually conjures up an image of small humanoid aliens with green skin. Cartoons often depict these beings as having antennae positioned on each side of their roundish hairless heads.

There are stories that the press coined the term Little Green Men. History Channel credits a mix of one headline Little Men from the Suttons' encounter and another alien encounter a couple of years later where small aliens and a tall alien dressed in green were reported. Somehow these two descriptions became entwined and the mythology of Little Green Men was born as a common description for aliens. 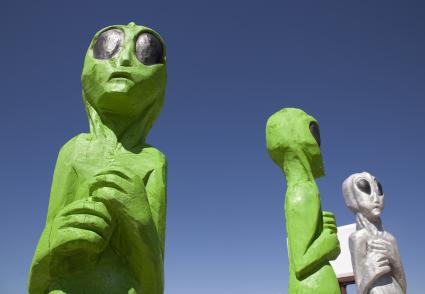 Earlier Use of Little Green Men for Aliens

The Encyclopedia of Science Fiction dispels the belief this is the beginning of the Little Green Men mythology. In fact, it may be much older, such as leprechauns­­­­­­­­­. Eventually other science fiction books often included little green men from Mars.

There are several depictions of green aliens that offer a non-frightening humanoid, while others are more vicious representations. The green alien history is a mix of eyewitness accounts, zealous creative authors and cynical assessments.