There are multiple ancient alien theories about who built the pyramids. These theories displace the capabilities of ancient Egyptians by espousing the idea that only aliens could create these architectural marvels.

Did Ancient Aliens Built the Pyramids as Power Plants?

The purpose of the Giza pyramids is widely accepted as burial tombs for the pharaohs. However, one ancient alien theory claims the massive structures were some type of ancient power plants. With the knowledge of the technology long forgotten, the theory speculates the pharaohs commandeered the majestic structures for their burial tombs.

The exact age of the pyramids is often debated, but the common belief is they were built by the pharaohs during their reigns. In 2016, physicists used cosmic rays, the subatomic particles in space or more aptly their muon byproducts, over a period of several months and discovered a hidden chamber above the grand gallery.

What Is the Void Inside the Great Pyramid?

The space was dubbed the void. It's located in the core of the pyramid about 20 meters (65.6') above ground. The space is 8 meters high (around 26') by 2 meters (6.5') wide and 30 meters (98.5') long. Needless to say, no one knows what's inside the void or its purpose. Some speculate it was designed to relieve the stress of the structure, while those claiming the pyramids were power plants have locked on to this discovery as possibly explaining why the pyramids were built and how they generated energy.

Are Egyptian Pyramids Older Than Thought?

One alien theory dovetails into the controversy surrounding the true age of the Giza pyramids. One of the ancient alien pyramid architect arguments uses the famous ostrich egg often called the Aswan egg as proof the pyramids are older than 4,500 years.

Since its discovery in 1907 the Aswan egg has become a topic of debate. Some people believe the three triangles etched onto the 7,000-year-old egg are representations of the Giza pyramids. If this is true, it would mean the Giza pyramids are much older than believed. This argument is sometimes used to lend credence that only aliens could have built such ancient structures.

One argument made by ancient alien theorists is that the Giza pyramid and the various precision mathematical formulas found within the construction of the pyramid are highly complex. This gives over to the argument that ancient Egyptians didn't have the knowledge of such exact and complex math at the time of the pyramid construction.

One of the examples given in argument of ancient alien assistance is how the pyramid is aligned to true north since Egyptians didn't have compasses. The conclusion of this argument is such mathematical formulas could only have been made by a more advanced civilization, aka ancient aliens.

RG Bauval put forth the Orion Correlation Theory and alignment of the three pyramids of Giza. Bauval stated the ancient Egyptians planned the three pyramids to match the configuration of three stars, Zeta, Epsilon and Delta Orionis, within the Belt of Orion on the Orion constellation.

Bauval referenced the Pyramid Texts that describe how the ancient Egyptian god Osiris (god of life, fertility, afterlife, dead, and resurrection) was the counterpart of the constellation of Orion, the symbol of rebirth and the afterlife. Using the three stars' positions in 10,000 BC, Bauval inverted the map of the three pyramids (upside down) to match with the three stars.

The Pharaohs Were Aliens or Hybrids

The Pharaoh Akhenaten, King Tut's father, is depicted with an elongated skull. Many ancient alien theorists point to this as more than an oddity, but similar to abductee accounts of the Greys, a group of aliens described in human abduction reports. 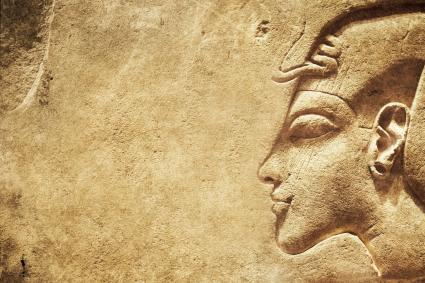 Two possible explanations for the elongated skull include a natural mutation or intentional cranial deformation. The former could be the results of chronic hydrocephalus. With the latter explanation, theorists speculate the manipulation of the forming of the skull was undertaken in an effort to make themselves look like their extraterrestrial gods.

Pharaoh Akhenaten was described in ancient texts as the "living embodiment" of the sun god, Ra. Ancient alien theorists conjecture that ancient gods were actually aliens. A recovered stone panel depicts Ra underneath the sun with beams of light showering him. This is known as a scene of the Adoration of Aten (giver of all life). However, theorists speculate the disc is a UFO and the sunbeams are laser beams. 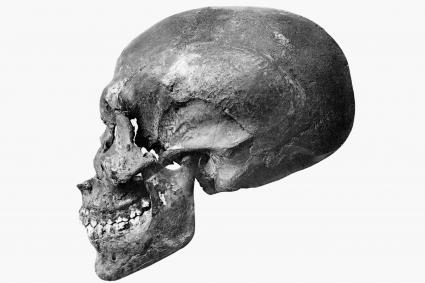 The Temple of Seti I at Abydos reveals a highly publicized series of hieroglyphs of three flying machines. One is a helicopter, a plane with a cockpit and a flying saucer. Another image is often described as a submarine, or for Star Wars fans, an airspeeder.

There is only one lintel block that depicts these flying machines. Archeologists explain how Ramses II took over his father's monument and ordered his scribes to carve over some of the existing texts to update them. This practice is known as Palimpsest. Archeologists state these hieroglyphic anomalies are the result of degradation over time as the plaster used to cover up previous text eroded, creating the series of glyphs that resemble modern aircraft. Ancient alien theorist find this explanation possible with one or two images, but not the entire series.

Some researchers point to archeological evidence that the ancient Egyptians used enormous ramps made of earth to continue building the height of the pyramids. These ramps wrapped around the pyramids like a circling roadway. In fact, remnants of these ramps of limestone, clay and gypsum have been excavated.

Another archeological find is what is called the Bent Pyramid. Built by Pharaoh Seneferu, this was one of the first attempts by the Egyptians to build a pyramid, but miscalculations made it go wrong. Located in Dahshur, this pyramid featured two angles. One was 54° and the other was 43°. The disproportionate angles gave the pyramid a bent, odd look. 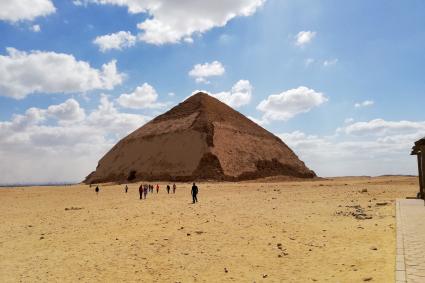 Within the Pyramid texts is building manual on how to construct pyramids. The Old Kingdom pyramid walls contained not just magical spells and rituals, but also a How-To manual. Each of the three pyramids named for the Pharaoh's credited with their construction, Khufu, Khafre and Menkaure document who worked on the pyramids as well as remnants of the workers' camps.

Most Convincing Evidence Who Built the Pyramids

One of the most controversial points of how ancient Egyptians managed to move such heavy slabs of stone was recently discovered on a panel depicting the actual building of the pyramids. This panel reveals something that had been overlooked.

In 2014, a painting inside an Egyptian tomb of Djehutihotep was re-examined and discovered to show how workers moved enormous stones on wooden sleds. The painting depicts a working pouring liquid from an urn, most likely water.

Scientists realized the water would bind the sand particles together and prevent the dry sand from creating a berm or mound in front of the sled when it was pulled over the sand. This made pulling the sled over the sand much easier.

Many Theories That Ancient Aliens Built the Pyramids

There are many theories about how ancient aliens built the pyramids. However, there are many artifacts that point to the Egyptians as the builders of the pyramids by using various ingenious methods and complex mathematical formulas.