Many people around the world believe zombies are real. Certain cultures believe in zombies, and in pop culture, television shows and movies depict zombies as a terrifying, real threat to the living. Attacks by what witnesses described as real-life zombies have set the internet ablaze, including the most publicized zombie attack captured by CCTV (Closed Circuit Television) in Miami, Florida.

The first half of 2012 saw zombie-like attacks in the state of Florida. The circumstances surrounding two of the attacks were bizarre and inexplicable. Like other related attacks, the assailants were naked and the violent outbursts were sudden. After the Florida incidents, further attacks were reported elsewhere.

In May 2012, a Florida homeless man was attacked for 23 minutes by a naked man who chewed off 80 percent of the victim's face. The first police officer on the scene ordered the assailant to stop, but according to a witness, the attacker glanced up at the police, growled and then resumed eating. The officer then shot the attacker, but the bullet didn't slow him down. It took several more bullets to finally stop the man, who was declared dead on the scene.

The autopsy and toxicology reports revealed marijuana, but "no evidence of any other street drugs, alcohol or prescription drugs, or any adulterants found in street drugs."

In April 2012, another Florida man displayed zombie-like behavior and was killed after police used a stun gun repeatedly to subdue him. According to NBC Miami, the victim told police that the naked man tried to bite his neck and tore at his clothes.

There is controversy surrounding this unusual behavior since 10 police officers weren't able to subdue the man. The family subsequently sued the police officers, citing unnecessary force.

In July 2011, a Colorado man was at the zoo with his girlfriend and complained of being hot. He proceeded to dunk his head in a nearby fountain and when approached by a zoo employee attacked him, biting and chewing on the employee. Police arrived and the man became more aggressive. A witness reported that it took 12 people to subdue the crazed man, who managed to bite a police officer. A taser finally brought the man down, but he died on the scene.

In November 1991, a 61-year old California woman bit her 87-year old mother nearly 20 times. The woman had been on anti-depressant medication for two weeks and claimed her mother had made her "so mad." The woman was still wearing a blood-stained nightgown when the police arrived.

The zombie attackers who survived all stated that they had no recollection of the attacks. Similar incidences are occurring worldwide and are being blamed on a variety of drugs, although toxicology reports often reveal no prevalent drug in the attacker's system. 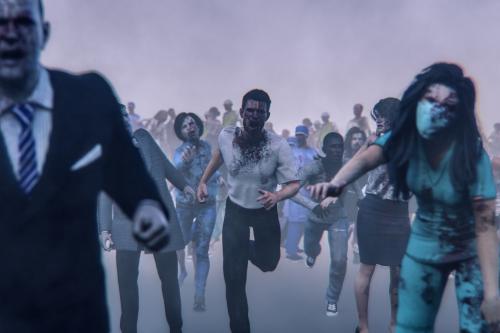 There are several explanations being given for these and other incidences of strange cannibalistic zombie behavior that include:

History and Mythology of Zombies

There are several types of zombies found in myths and modern pop culture. These include:

If real-life incidences of face-eating zombie behavior aren't disturbing enough, then turn to the the CDC (Centers for disease Control and Prevention) blog.

In May 2011, the CDC posted on the official government blog an article titled Preparedness 101: Zombie Apocalypse. While this tongue-in-cheek approach is to encourage people to be emergency prepared, there is a disturbing component to the CDC scenario.

Many conspiracy theorists claim that the following CDC's blog statement should be taken as a subliminal warning: "The rise of zombies in pop culture has given credence to the idea that a zombie apocalypse could happen. In such a scenario zombies would take over entire countries, roaming city streets eating anything living that got in their way. The proliferation of this idea has led many people to wonder 'How do I prepare for a zombie apocalypse?' "

Many theorists claim that zombie viruses currently exist and the incidences over the last couple of years have been controlled test subjects. Others believe that a viral agent was accidentally released into the world and is in the process of gestating and mutating, cropping up in random episodes that will eventually escalate.

In 2012, scientists reported on honeybees that were turned into zombies by parasitic flies. Termed ZomBees, the bees were infested with the parasitic flies, which took over their behavior and caused strange activity uncharacteristic of honeybees, ultimately resulting in their death.

Based on the increasing number of reports of zombie-like behavior, it's difficult to dismiss that modern zombies exist. Whether the cause is a new drug on the streets, some form of mind-control, or unknown agent, it's clear that something is happening that isn't fully understood.