Reported real Mothman sightings keep alive theories that this mysterious cryptid is either a harbinger of doom or some kind of omen that warns against a future catastrophe. One of the things that makes Mothman so fascinating is that the creature seems to be unhindered by regional boundaries since it continues to been seen by witnesses all across the globe.

In many cases, Mothman has been reported as appearing before a disaster, leading some to believe Mothman comes as a harbinger of doom.

The creature was first seen on November 15, 1966 by Roger and Linda Scarberry, their cousin Lonnie Button, and Steve and Mary Mallette. One night, the group was driving past the West Virginia Ordnance Works, located about seven miles north of Point Pleasant, when they noticed two red lights near the factory gate. They stopped the car to investigate and discovered that the lights were actually the glowing eyes of a "large animal, shaped like a man, but bigger, maybe six and a half or seven feet tall, with big wings folded against its back," according Linda Scarberry in an eyewitness account detailed at Mothman Museum. The creature chased the group at speeds of over 100 miles per hour toward Route 62.

The following night, the creature was seen by Mrs. Marcella Bennett and then again on November 24 by four more people. On November 25, the Mothman was seen standing in a field when it suddenly spread its wings and flew away. On January 11, 1967, the Mothman was seen hovering around the Point Pleasant Bridge, also called the Silver Bridge. On and off throughout that year, more reports were filed about sightings of the creature around the bridge. Finally, on December 15, 1967, the bridge collapsed and killed 46 people.

In 1986, people in Chernobyl started reporting sightings of what they called the Black Bird of Chernobyl. Several reported seeing a large headless man with red eyes and black wings. These sightings continued until the night before the meltdown of the Chernobyl nuclear plant.

On September 11, 2001 in New York City, a large, winged creature was reportedly seen flying from the World Trade Center Towers on the day of the infamous terrorist attack.

In 2007, an eight-lane steel bridge on I-35W collapsed during evening rush hour. Thirteen people were killed and nearly 150 injured. After the collapse, George Noory received multiple calls on his radio program Coast to Coast AM from people reporting Mothman sightings.

In 2009, a Swine Flu (H1N1) pandemic started in rural Mexico near Chihuahua and spread throughout the world with more than 14,000 deaths confirmed worldwide. Investigators traced the pandemic's origins to the month of April, just a month after more than 30 sightings of Mothman in and around Chihuahua. 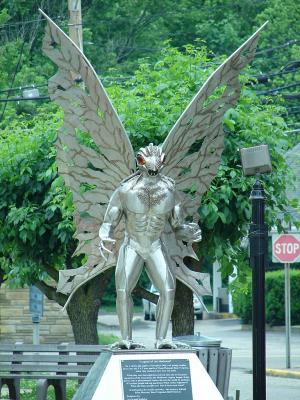 Mothman sightings are not commonplace, but they appear to be ongoing. That they sometimes precede disasters may be significant, or it may merely be coincidence. Only time will tell as patterns emerge whether this is urban legend, folklore, or something supernatural.