If you've watched the movie The Blair Witch Project, you know about the witch named Elly Kedward that was the foundation for the movie. The fictitious legend was ideal for the marketing hype created for the movie. In addition to that core story, there were additional urban legends hidden throughout the movie that weren't quite as obvious.

The independent filmmakers developed an elaborate legend about a fictional character, an Irish immigrant named Elly Kedward who was accused of being a witch in 1786. Elly was banished to starve to death in the forests surrounding the fictional township of Blair.

The filmmakers littered the fabricated story with enough names, dates, and places to make the legend feel somewhat believable, especially for anyone who never bothered to verify any of the facts. Since so many people failed to check the authenticity of the story, the legend quickly became viral on the internet and fueled the hype leading up to the movie release date. The urban legend had the following elements.

The convincing timeline of the legend extended all the way up to the story of Heather Donahue, Joshua Leanard, and Michael Williams. This part of the story included the "fact" that the three student filmmakers entered the forest to investigate the legend of the Blair Witch, only to disappear in the cursed Black Woods. The legend finished with the claim that authorities discovered film canisters, which held evidence of what the three witnessed. The video quality and style were just shaky and amateurish enough that many moviegoers were convinced the footage was authentic. As detailed and convincing as the urban legend of the film's origin appeared, it was completely fabricated by the filmmakers.

Despite the fact that the three actors provided interviews and attended public events following the release of the film, the promotion of the urban legend was so thorough and widespread that there are still people who believe the story is true. This is a clear demonstration of the power of urban legends.

In addition to the core legend of Elly Kedward, there are a number of elements throughout the film that were borrowed from existing legends. In particular, the objects that the students found during their walk into the Black Woods were highly symbolic of real-world objects steeped in legend and folklore.

As the student filmmakers walked through the woods and became lost, they discovered seven piles of stones. It seemed obvious that each pile of stones represented each of the seven children that were murdered in the Blair Witch legend. Later, the three students wake up one morning to find three more piles of stones around their tent; an ominous threat that they would soon suffer the same fate as the children. But why piles of stones? 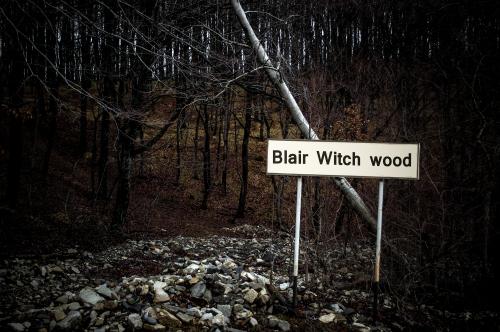 The choice to use piles of stones as a symbolic grave or death was probably borrowed from the many old stories of the accused witches' gravesites in both Europe and Colonial America. The executed witches had nothing to mark their graves but a simple pile of stones. One example of this is the prehistoric fort in Lothian, Scotland where piles of stones north of the Fort represent the gravesites of witches that were burned at the stake. Many towns throughout the world share similar legends about local witch graves marked by small piles of stones. By adding this element to the movie, the filmmakers of the Blair Witch movie made the story even more believable.

Another discovery in the course of the students' adventures was a group of stick dolls hanging from the trees. While the meaning of this discovery wasn't entirely obvious, the use of such figures was reminiscent of voodoo legends of magical rituals that use wooden dolls. In fact, one West African legend mentions the story of a woman named Akua who could not bear children. One day a wise old man advised her to make a wooden doll and treat it as though it were a real child. This is the reason that particular style of wooden doll represented fertility. It may only be coincidence that the Blair Witch legend involved the murder of children, but the connection between stick dolls and voodoo-like magical rituals and children seemed obvious enough.

The practice of fabricating new urban legends for the sake of entertainment seems unethical to some people, if for no other reason than many people continue believing the story to be true long after the truth is revealed. Filmmakers may feel that convincing people of false legends is innocent enough, but tall tales and fabricated stories are the very reasons many false urban legends are so prevalent in the world today.