Recent Aircraft and Ships Lost in the Bermuda Triangle

According to The Sun, "75 planes and hundreds of ships" have disappeared in the mysterious triangle. There are over 1,000 people who vanished from the Bermuda Triangle over the past 100 years.

Two disappearances reported in the 1990s continue to deepen the mystery of the Triangle. Although these disappearances happened as recently as the 1990s, details are still limited.

The last known contact with the pilot of a Grumman Cougar jet occurred when he made a routine radio request as he was ascending. He gave his altitude of 29,000 feet, and the aircraft just faded until it disappeared from radar. The Quester Files reports, "One sweep of the scope they were there. The next- raised brows on traffic controllers: it was blank." There were no blips on the radar showing debris falling to the ocean, and no debris in the ocean was ever found.

The National Chiao Tung University Department of Computer Science featured an article on the Bermuda Triangle highlighting the disappearance of the freighter, Genesis. The freighter sailed out of the Port of Spain heading toward St Vincent. The 465-ton cargo consisted of water tanks, bricks, and concrete slabs. A distress call received by a vessel sailing nearby reported the freighter was having problems with the bilge pump. After the call for help, the ship and crew were never seen or heard from again. The US Coast Guard search covered 33,000 square miles.

However, reports on recent unexplained disappearances are much harder to find, possibly because of advances in modern technology have eliminated lost planes and ships. Recent bermuda triangle events include fishing vessels, recreational boats, commerical ships and aircraft.

On June 18, 2003, Frank and Romina Leone left Boynton Beach Inlet, Florida in their recently purchased 16-foot boat. The couple planned for a fun day excursion of fishing. They were never heard from again. Both the couple and the boat disappeared. The couple was fondly remembered in a June 24, 2003, Sun Sentinel article. The Leones launched their boat on a Wednesday afternoon and when the each failed to show for their jobs in West Palm Beach, coworkers, friends, and family feared the worst. Early Friday morning, the Coast Guard launched a rescue mission and covered over 35,700 square miles ranging from Miami to Savannah, Georgia. The search was called off around 6 pm the following Monday.

On December 15, 2008 a Britten Norman Islander vanished near the Windward Islands with 11 passengers aboard. Aviation Safety Network noted the pilot reported an emergency to Providenciales ATC (Turks and Caicos Islands). It is assumed the airplane probably crashed into the sea shortly after the distress call. The Asociación Nacional de Pilotos stated that the pilot's license had been suspended in October of 2006. The Sun in its October 21, 2016 article states the plane began to ascend 35 minutes after take off and simply went off radar. These are two very different reports about the same disappearance.

Not all accidents and disappearances are related to mysterious circumstances, but the number is staggering when you calculate the odds of so many aircraft and ships disappearing in a specific region. In the cases below, crafts and/or bodies were found, or experts posited potential for disappearances.

On October to November, 2003, a fishing boat with the tragically ironic name of "What's Left" was found capsized on a beach near Cape Canaveral. In an article published in the Orlando Sentinel, human remains found on the boat were believed to be one of the missing boaters, Gary Lisk, 61. Neil Eddleman, 47 and son, Neil Allen Eddleman, 13, were not found. The trio left on October 17 for a day fishing trip that would take them 65 miles southwest of Naples. The wreckage washed up 400 miles away from where they'd launched at Gordon Pass. How the boat in the Gulf of Mexico ended up where it was found in the Atlantic Ocean baffled authorities, who could only speculate the boat may have been caught in the Atlantic Gulf Stream, a slow moving current that travels up the eastern U.S. coast.

On March 23, 2004, The Ledger reported that a 19-foot fishing boat owned by 40-year-old fishing enthusiast Glenn Jamison left Hudson, Florida around 4 am Sunday and was scheduled to return that night. The boat was discovered 32 miles west of Egmont Key, Florida, but Jamison was missing.

On June 20, 2005, a Piper PA- 23 vanished between Treasure Cay, Bahamas and Ft Pierce, Florida with three people aboard. The Aviation Safety Network states two controllers failed to notify the pilot of precipitation within is route. The conclusion is the pilot flew into thunderstorm activity and lost control of the aircraft, crashing into the ocean.

On July 24, 2015, Austin Stephanos (14) and Perry Cohen (14) disappeared from their 19-foot boat after setting out from Juniper, Florida on a Bahama fishing trip. The largest US Coast Guard search ensued that spanned 15,000 square nautical miles. Eight months later, the teens' capsized boat was discovered 100 miles off the Bermuda coast. One possible sighting occurred two days after their disappearance when pilot Bobby Smith and his granddaughter were flying from Marys, Georgia. The SunSentinel reported the pair spotted someone lying on their back on what appeared to be debris. The person waved their arms when the pilot circled around. Smith called the coast guard but quickly lost sight of the person. Just before their disappearance, the teens posted a two-word Snapchat message that they were in trouble. Investigators discovered the boat's battery was intentionally turned off. A mechanical failure would automatically switch off the battery. Austin's phone was recovered from the boat, but was too severely damaged to retrieve any information. The boys were never found.

On October 1, 2015, perhaps one of the most senseless and tragic Bermuda Triangle disappearances was the sinking of the SS El Faro cargo ship that departed Jacksonville, Florida heading for Puerto Rico. The ship's captain and owners made a monstrous mistake to continue sailing right into severe tropical storm Joaquin that turned into a Category 3 hurricane. The ship's equipment failed to provide current weather conditions, failing with a 21 hour lag time. The ship was found a month later 15,000 feet below the surface. None of the crew bodies were ever found. The ship's black box was recovered. The riveting and heartbreaking transcript was published by USA Today.

One of the most recent disappearances in the Bermuda Triangle occured on February 23, 2017. The Aviation Herald reported that Flight TK-183, a THY Turkish Airlines Airbus A330-200 registration TC-JNE, was traveling from Istanbul (Turkey) to Havana (Cuba) when it experienced issues with the left engine. There were 173 passengers and 13 crew members on board. The plane was about 200 nautical miles north of Bermuda when the incident occurred. The crew requested to descend from the normal flight altitude of 38,000 ft to 30,000. They believed the change in pressure would correct any problems with the engine. When the engine still didn't resume within five minutes of descending to 30,000 ft, the captain requested being diverted to Dulles airport. The plane flew for 2.5 hours with just the right engine working. It landed safely in Washington. One of the commenters stated the problem with the engine was a faulty starter.

One of the latest bermuda incidents took place on May 15, 2017, when a private MU-2B aircraft carrying Skylight Group founder and CEO Jennifer Blumin, her 3- and 4-year-old sons, and pilot Nathan Ulrich vanished. The plane was at 24,000 feet when it disappeared from radar and Miami traffic controllers lost radio contact. The Skylight Group founder and CEO was traveling with her children from Puerto Rico to Titusville, Florida. Blumin owned the plane, and Ulrich was flying just east of Eleuthera, a Bahama Archipelago island when it vanished. The following day, the US Coast Guard discovered a debris field 15 miles east of Eleuthera, believed to be that of the missing plane. No one onboard was ever found.

In posts appearing on both World Mysteries, a blog dedicated to unsolved mysteries and DiscloseTV, a news hub dedicated to unexplained phenomena, passengers on large, modern aircraft may be counting their blessings as survivors who just escaped being caught in the Triangle's spooky web.

1995 Close Call on a Piper Warrior 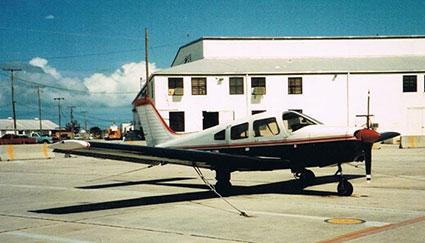 Cary Gordon Trantham had a close call as a pilot of a small, private Piper Warrior when she was returning to her home in the Florida Keys. She'd flown to Ormond Beach to spend the day shopping with her daughter. While flying over the open water at night, she suddenly felt as if a dark blanket had been pulled over her plane. The horizon disappeared, and she couldn't see lights of any kind, just total blackness. She couldn't distinguish between sky and ocean. It was all black. At this point, a pilot can only rely on the plane's instruments to keep it level and at a safe altitude. Unfortunately, the compass was erratic and the panel lights dimmed then became bright and dimmed again. The altitude indicator began to roll, and there was a buzzing sound in her headset. You can find out how she escaped a tragic ending by visiting her website, Bermuda Triangle Survivor. Her story has been featured on the Discovery Channel, The Learning Channel, Syfy network, and National Geographic. Did she experience the mystery of the Bermuda Triangle that other pilots have but didn't survive to tell about it?

On March 26, 2001, World Mysteries explains that ComAir flight 5054 shook up passengers on a flight from Nassau to Orlando when the plane began rolling from side to side and went into a deep dive. The plane managed to land safely in West Palm Beach but sustained serious damage to key tail components. Problems began when ice started to cover the windshield, the right engine, and the right wing. Although the crew reacted quickly by turning the plane's anti-icing system on to high, the plane began to roll and then dive. Important flight instruments also began to fail at this time. This example could explain some of the mysterious disappearances over the Bermuda Triangle.

The history of the Bermuda Triangle is a trail of unsolved disappearances. Theories about why ships and planes go missing in this region are numerous with the latest explanation of underwater craters releasing methane gas buildup. With no ongoing database, it's difficult to know if the mysterious activity in the Bermuda Triangle is waning or simply not being documented.

11
Comments
© 2006-2020 LoveToKnow, Corp., except where otherwise noted. All Rights Reserved.
Recent Disappearances in the Bermuda Triangle